The hull of the Mulder 94 Voyager arrived at the Mulder Shipyard in Zoeterwoude-Rijndijk. The outfitting of the 28,65 metre long and 6,90 metre wide yacht will start this week. This elegant custom-built Mulder 94 Voyager has a classic modern style and is built in full aluminum. 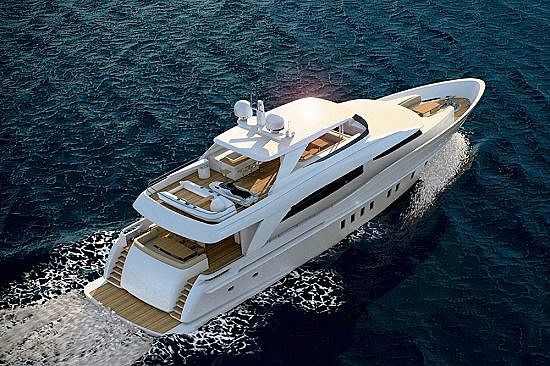 Frank Laupman from the Dutch design company Omega Architects designed the 94 Voyager in a classic contemporary style with lots of space and an especially impressive main saloon and master stateroom. Laupman previously already created the interiors of the 98 Flybridge and Bellagio for Mulder Shipyard. Vripack Naval Architects is responsible for the naval architecture of the yacht, built to RINA classification, which will ensure a perfect seagoing performance, stability, safety and comfort.

There are two mainstream trends in yacht building today – one, more recent, focuses on sharp shapes, striking details and deliberate minimalism, while the other emphasizes flowing lines. The Mulder 94 Voyager was designed to combine the two, creating a gentleman's yacht that is both stark and elegant, while allowing for maximum comfort and security even during long voyages. Well-organized planning and innovative construction will allow for an unusually spacious interior of a size more commonly found on much larger boats. This is explained in part by the yacht's impressive beam and non- standard ceiling height of 2.20 meters. Furthermore, unprecedented attention to details and a special method for timber processing deployed by Mulder Shipyard specialists will result in a superbly streamlined interior décor. 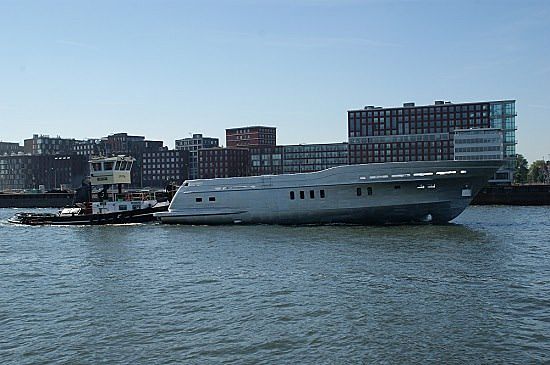 The developers have paid special attention to living and social areas onboard the Mulder 94 Voyager. The interior will comprise a bright, spacious saloon with an area exceeding 40 square meters, adjacent to a dining room seating eight people. The separate galley located on the port side will contain three large fridges designed for long-distance cruising. The yacht's accommodations will comprise a generous master stateroom of more than 24 square meters, including a large bathroom and a walk-in closet. There will also be a luxurious VIP suite and two guest cabins, each featuring a private bathroom. The main deck will include a day head. At fourteen metres in length, the yacht's flybridge will be roomy and luxurious and partly covered with an aluminium bimini. Besides a complete dashboard the flybridge also features a royal grill bar adjacent to twin comfy U-shaped settees, as well as cozy deck chairs and sun beds outside. An impressive feature of this versatile space will be the option to combine tables so as to create a seating area for eighteen persons. The swimming platform will connect to the crew accommodation, which will provide room for two to four personnel. It will include a separate dining space, a galley and a workshop, indispensable for the comfort and privacy of all onboard during long-haul voyages. The engine room will also be accessible from the crew area.

The yacht will be equipped with two efficient Caterpillar C18 engines, each delivering 1150 hp and providing for a maximum speed of around 20 knots, a cruising speed of 15 knots and a range of 3600 nautical miles at 10 knots. Coupled with a three-ton freshwater tank and a water maker with a capacity of 166 liters per hour, this will easily allow the Mulder 94 Voyager the self-sufficiency required to cross the Atlantic. The leading Dutch company Silent Line will implement special methods of noise insulation, which will contribute to the relaxed and peaceful atmosphere on board. In addition, the exceptional keel construction will ensure that the yacht can moor without the guests or neighbors noticing.

The Mulder 94 Voyager will be constructed at the new yard in Zoeterwoude-Rijndijk. The sustainable facility is developed for efficient yachtbuilding. The 94 Voyager is expected to be delivered in May 2014 and will have her berth in the south of France.