Built by Heesen Yachts in 2001, the 37.70 metre aluminium superyacht AlumerciA undertook an extensive refit that was completed last year. In just 100 days, she was completely transformed by her new owner, including an overhaul and total customisation of the interior design as well as many significant changes to her exterior - notably the extension of the fly deck by an impressive 30 square metres. 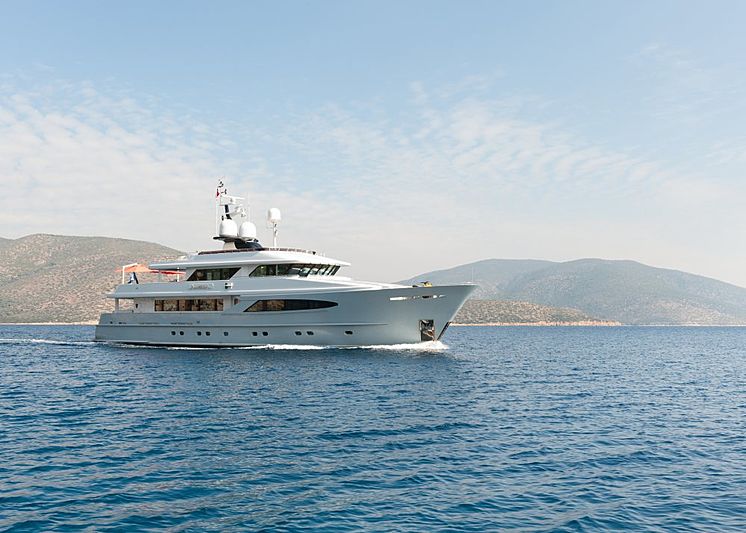 With help from VripackThe final result is a yacht that looks dramatically different to before, with a traditional tri-deck luxury profile and a wealth of additional amenities and modern features to satisfy any discerning family-orientated owner. Taking the title of best refit at the 2015 edition of the World Superyacht Awards, the hard work clearly paid off.

We caught up with the man behind the refit, Serkan Borancili, on board the yacht at the latest edition of the Monaco Yacht Show, where we were warmly welcomed on board to hear the story of AlumerciA’s transformation and why Borancili is on the lookout for a bigger project.

Tell us a little bit about your background.

I live in Istanbul, and I studied architecture there. After I graduated I pursued a career in architecture before I quit in 1999 to focus on several entrepreneurial dreams I had had for a while. In 2000, I launched a website in Turkey which was an online marketplace business, similar to eBay. I actually sold my business to eBay after around a decade in business, in 2011.

Following that I used my experience and knowledge from my previous business and started investing in internet companies, which I’ve been very successful with, but my background from childhood is very connected with maritime; my father was a gulet producer. Gulets are traditional Turkish sailing boats, which are very popular in Turkey. We were chartering these gulets that my father built, and when I was at university - in the summer time - I was working on the yachts. So my family life is very connected with boating from a very early age.

Was AlumerciA your first motor yacht?

No, I previously owned a 30 metre motor yacht. She was an Azimut yacht, the 103S, which I purchased from Mr. Vicelli, the founder of Azimut, and I spent three seasons with her. She was a very nice yacht and I was happy with her, but I couldn’t cruise particularly long ranges with her, so after three seasons I decided to change. I brought the captain of the Azimut to AlumerciA with me, and we’ve been working together for six years; so this is our sixth season cruising this year. 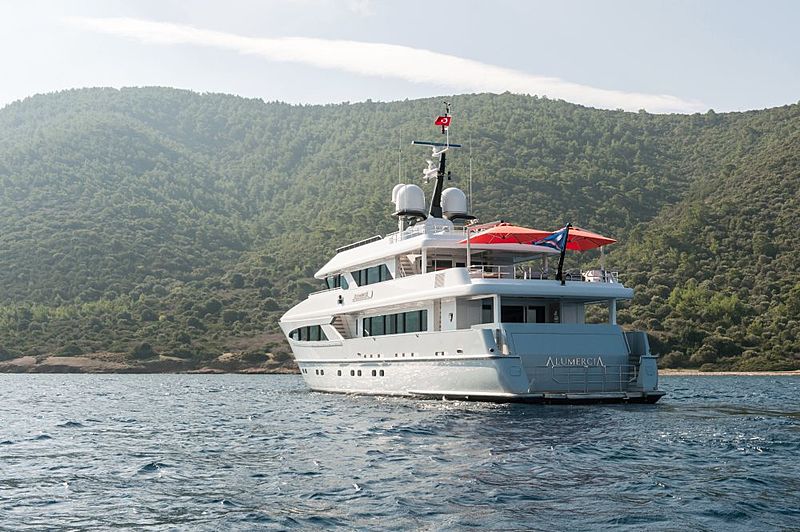 What were you looking for in your next yacht when you made the decision to sell your previous yacht?

In 2013 we started to look for the right boat for me. Amongst the requirements was having a long range and full displacement. At the Monaco Yacht Show of that year, we saw AlumerciA. She was totally different at that time. I went inside and, as an architect, I immediately started thinking of what I could change, and I quickly realised that I could do many things with this yacht. It was like a project for me. So I bought AlumerciA in March 2014. We then sailed to Istanbul and we started work on the refit.

What in particular interested you about AlumerciA when you saw her for the first time?

It wasn’t just that she was bigger than the Azimut - which was for sure a factor - but I like her design a lot. She is timeless. When you have a design like hers you can do many things with it, as I noticed when I first saw her. I knew it was possible for me to change her to suit my living style. She’s a unique boat because she has shuttle drive, and only around nine private yachts in the world have shuttle drive. She’s a very smooth cruiser with no vibrations, she also has low fuel consumption - just 85 litres per hour - so that was a priority for me. She’s a unique yacht. She’s also travelled around the world many times, so she’s a proven yacht with an interesting story.

Why didn’t you change the name when you bought AlumerciA?

The previous owner earned his living with aluminium, so AlumerciA came from playing on the word of aluminium… she’s a full aluminium yacht so it made sense to keep the name for me! People say it’s bad luck to change the name of a boat. Maybe it’s true, because I didn’t change Paolo Vitelli yacht’s name either, Gogamigoga, and I had a great experience with her.

Have you ever been interested in getting into the charter market with AlumerciA?

With the amount of time I spend on board, we don’t really have much time left over for charter. I’m full time with my family on board, so I bring my young daughter, my mother and father, my wife’s mother and father. Together we’ve travelled a lot. I think Croatia is definitely one of our favourite cruising grounds - I’ve not been to the Caribbean yet, so if we don’t sell AlumerciA then we’re planning on heading there. And the Norwegian Fjords of course, I find that very fascinating. 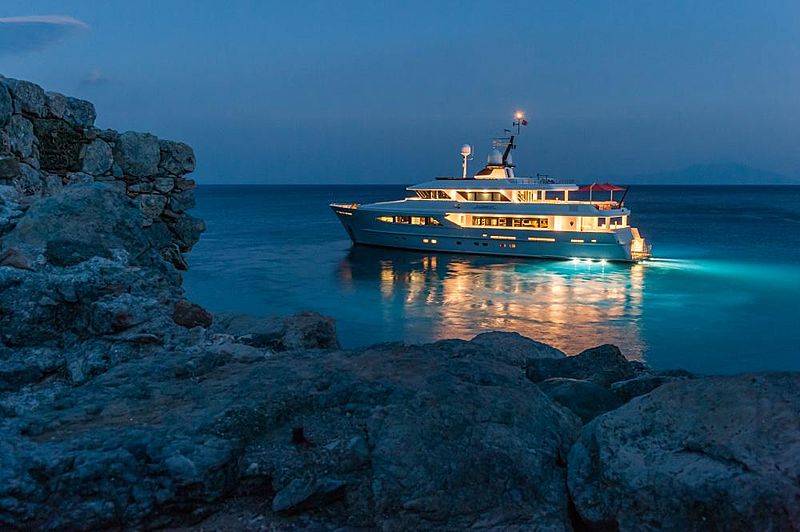 The 100 day refit of AlumerciA saw the yacht completely transformed, taking the title of Best Refit in the 2015 World Superyacht Awards. Tell us about the process.

We changed a lot on AlumerciA. One of the biggest changes is seen on the sun deck - which just didn’t exist in the same way as it does now - as well as with the interior. In 100 days we changed the whole exterior and interior, which was a very rewarding challenge. We didn’t touch the engine room as this element of a refit is always pretty time intensive, and we still wanted to catch the season. So after the 2015 season we returned her to the yard for another refit, this time focusing on the engine room. We overhauled the main engines, shuttles and generators. AlumerciA is now in tip top condition, and we had a very smooth, nice season this year.

Yes, Borancili Marine is my company. I often get asked the question of whether this company was established just for the refit of AlumerciA… and the answer is yes. One of my friends actually offered his own yacht’s refit project to Borancili Marine, but I didn’t take him up on it. We don’t do that. Borancili Marine is only for AlumerciA, but it is still an existing company.

After investing a substantial amount of time and money into AlumerciA, why did you decide to sell?

I want to have a slightly bigger boat - a maximum of 45 or 46 metres. I’m looking at a second hand boat, but I’m also interested in embarking on another project boat. I’d be more than happy to do another refit. So we’re looking for a hull right now to build up from scratch. 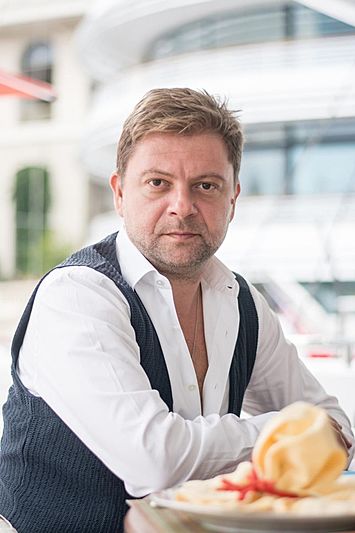 Are there any superyachts here in Monaco that stand out to you?

Enigma is a very cool boat. From 1991 and she looks unbelievable. I wouldn’t ever buy such a big boat, but she’s impressive. It’s like running a factory when you get that big… it’s a huge hassle. Especially with something like Enigma which is a very complicated yacht. So I’ll continue looking for something around the 45 to 50 metre mark, and hopefully we find something that captures our interest in the foreseeable future!

This article was featured in the latest edition of the SuperYacht Times newspaper.To read the full interview, subscribe now and never miss another issue.

Brokerage deal of the week: the 38m Heesen superyacht AlumerciA