Since September 2018, Texas-based husband and wife Timothy and Elizabeth Vail have been the happy owners of the 33.5-metre Broward Marine motor yacht, Alexandra Jane. After previously owning an 18-metre Bertram yacht which was based in Cabo, Mexico, for many years, the couple finally decided to upscale, and Alexandra Jane (ex: Kelly Anne) was the solution. Here, we sit down with Elizabeth to find out more about the vessel's upcoming refit at IK Yacht in Fort Lauderdale and her upcoming charter adventures. 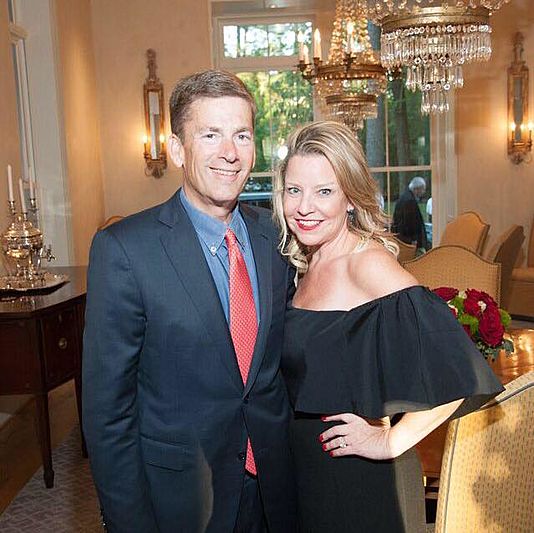 Photo: Elizabeth Vail
Tell me more about your ownership journey: what was it that made you buy your first ever yacht?

My husband and I first purchased a 28ft Bertram that we used along the Gulf Coast. We used it mainly for fishing, but we found the boat a little too small and the Gulf Coast very rough for the size of the boat. We sold that boat when we came across 'Vintage' an older 42' two stateroom Hatteras. We kept the boat along the Gulf Coast but eventually moved it to Florida and took trips on it to Bimini, Nassau and the Abacos.

Again, we decided to look for something larger which would accommodate a larger group of family and friends. In 1999, we found and purchased the Maverick, a 60ft, three stateroom Bertram. Tim wanted a boat that was good for deep sea fishing and I wanted something comfortable for cruising and entertaining. Maverick was great for both. Maverick went everywhere! We moved her from Texas to Florida, then the Bahamas and the BVIs.

When we moved up to New York, we brought her along. We cruised the East Coast and spent time on her in Nantucket and Block Island. We eventually moved her back to the warmth of Florida. When we purchased a house in Cabo in 2006, we moved the boat there to take advantage of the great fishing. We sold the house a few years ago, and just sold Maverick after 18 great years. My husband has a friend who has a new 82' Viking in Cabo and found that he was fishing on that boat most of the time and Maverick was not being used as much. 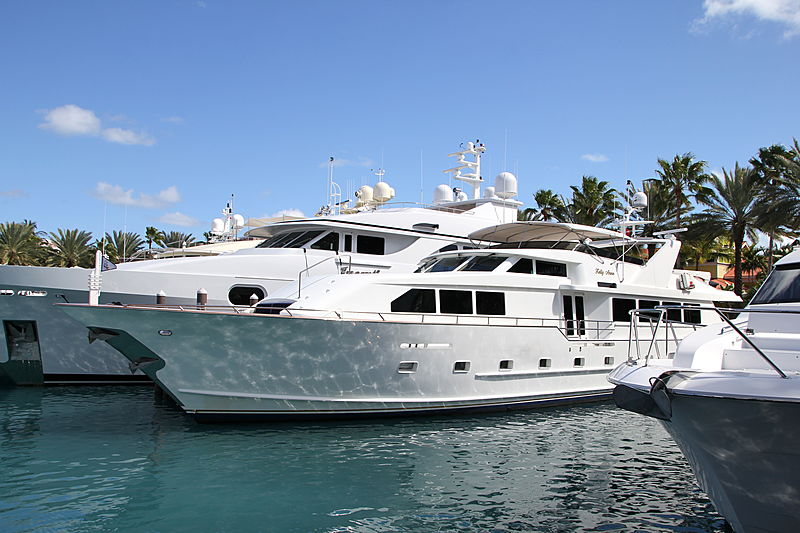 Photo: Merijn de Waard / SuperYacht TimesWe had been wanting to return back to the Bahamas and enjoy cruising we had done previously. We had been going to boat shows and perusing the internet for a larger yacht and focused on boats from 90' to 130'. The upkeep and maintenance of a larger boat was a bit daunting, but finding the Broward with such a great crew made the decision easier. We probably looked at around 30 boats before coming across Kelly Anne on the internet. At the time, I actually told Tim "That's our boat!" We booked a flight to Fort Lauderdale and looked at her and one other boat. We put an offer on her that week.

After a couple of weeks of negotiation, we were the new owners. We are really looking forward to making memories with our family and friends on the new boat. She has five staterooms, so there is plenty of room for us and the kids can bring plenty of friends. The kids (we have 16-year-old boy-girl twins) are heading off to college next year, so the boat will be a great place to reconnect during summers and school holidays.

Why did you decide to upscale in size to the 33.53-metre Alexandra Jane, and what was it that drew you to her initially?

We wanted more room to accommodate more people on extended cruises. We knew what kind of layout we were looking for after seeing so many boats. This boat had five staterooms and a great open flybridge. The outdoor areas are super important to us! Houston can be pretty hot and humid a lot of the year so spending time outdoors with cool ocean breezes is a huge treat! The Broward also holds almost 7000 gallons of fuel, making her range capacity great for extended cruising. 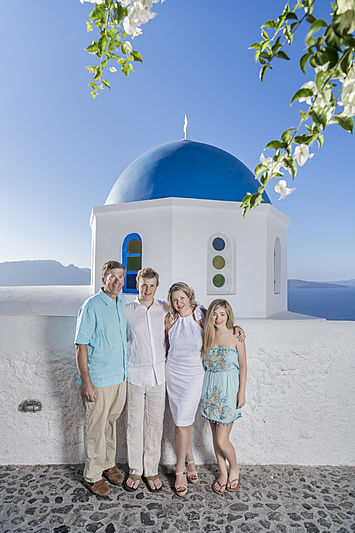 Photo: Elizabeth Vail
Tell me more about the plans for Alexandra Jane's upcoming refit in Fort Lauderdale. What specific works will be done on her?

After a few cruises, we have put her in the yard at IK Yacht in Fort Lauderdale for an interior and partial exterior refit. The refit is being completed by Zak Kadosh of IK Yacht Design in conjunction with Creative Tonic of Houston, Texas. She will be finished the last week of February and return to Nassau, the Bahamas at that time.

Although Alexandra Jane was very nice when we bought her, we decided she could use updating and some additions to meet our needs and the way we use the boat. Besides new decor, refinishing all the woodwork and new carpet inside and out, we wanted to enhance the outdoor entertaining areas because that is where we spend all our time! Up top, we are adding a television and a new low-profile modern spa which better suits the space on the flybridge.

New bar and table tops and added ice making and refrigerator capabilities will complete the work there. In the aft areas, we are adding a high-low dining table which will allow the area to convert from a dining area to a conversational area. The aft deck is also getting all new teak decking.  A grill will be added to the back deck as our chef loves to grill out fresh fish and meats. The salon is being completely remodelled with the addition of a new bar and a large wine refrigerator.

New furnishings and a digital art frame with original art will complete the transformation. All the staterooms will be getting new headboards, high-end linens and bath hardware. The galley is getting all new appliances, countertops and a reconfiguration to better fit the needs of our professional chef and crew. Another huge addition with be HD TV and internet. Although it is great to disconnect from the outside world, sometimes you just need to be in touch with family or the office. This will give us and future charterers piece of mind and more flexibility in getting away.

We have also added new toys - two new Seabobs, a yacht slide and inflatables along with our existing jet skis, paddle boards and water ski and scuba/snorkelling equipment. We are also upgrading the 32' Intrepid tender with new engines - a great tender is a must! 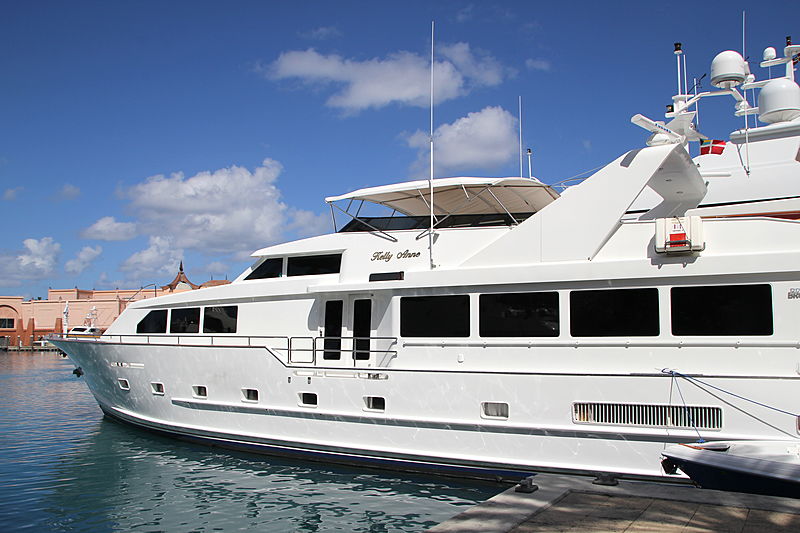 Photo: Merijn de Waard / SuperYacht TimesWhat was it that made you decide to offer Alexandra Jane for charter, and how has this experience been so far?

The Alexandra Jane was in an established charter operation when we bought her. As we still have two kids in high school and live in Texas, we can only get out to the boat about five-six times a year. It only makes sense to charter her to offset some of the expenses of running her. The yacht has a great following and has repeat charterers year after year. We are finding that the problem is not getting enough charters but making sure she is not chartered too much so we have plenty of time to enjoy family time on her! Having such a great and attentive crew keeps us from worrying about the boat staying ship-shape.  She is actively chartered and is represented by Rod Lindor of Worldwide Boat.

Which locations are you most looking forward to taking Alexandra Jane on her travels?

The yacht is based in Nassau and mostly charters Abacos, Exumas and Eleuthera. It would be great to take her to the BVIs, St. Barth and maybe even Cuba!