In August 2021 Patsy Bolling, serial yacht owner and veritable yachting legend, was invited aboard the 12-metre A. E. Luders, Jr. racing yacht American Eagle. For Patsy, this was the long awaited return to a yacht that she knows like the back of her hand. When she steps aboard, it will be the first time in 50 years that she has hoisted a sail aboard the yacht. 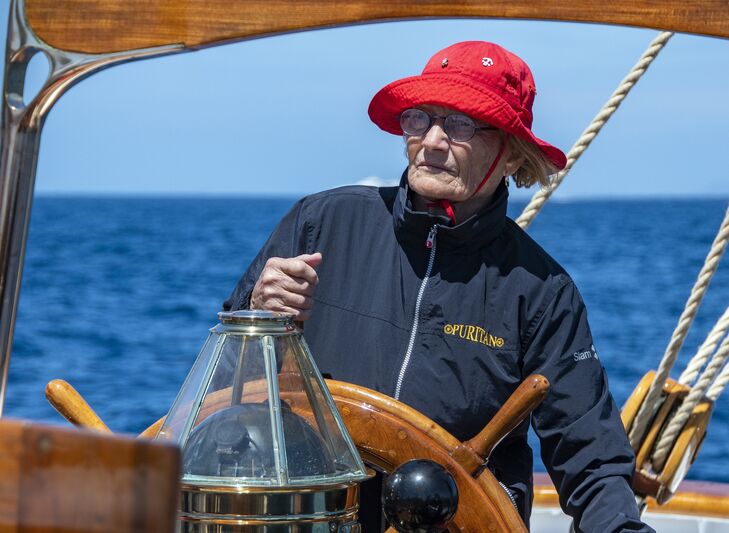 Photo: Blue Passion PhotoDuring her two year tenure American Eagle won the 1970 Fastnet in Cowes and raced against Australian challenger Greta in the America’s Cup test of the same year. She was the first woman to race in an America’s Cup competition, 22 years before they were permitted.

Patsy and I caught up over the phone in the weeks before the event to talk about her incredible life on boats, that she shared, in part, with her late husband Bill Bolling. Patsy estimates that they owned around 13 yachts, of all shapes and sizes, spending their lives restoring and selling on yachts which were much in need of their love and expertise. 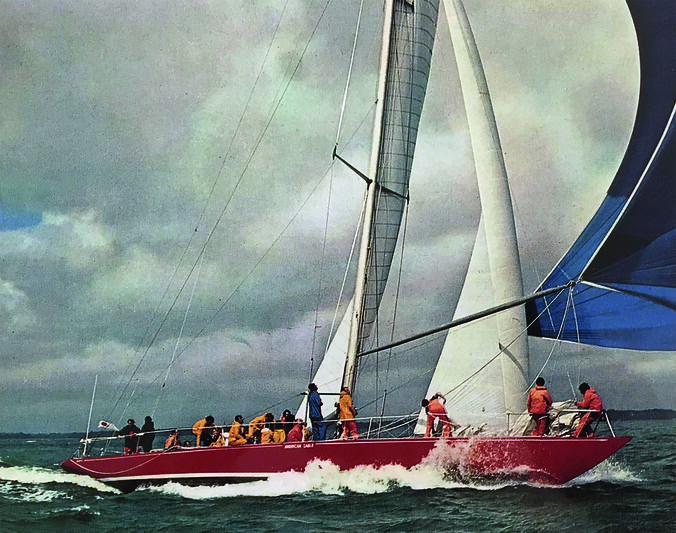 Photo: Beken of CowesPatsy was raised amidst the salt and sail, spending her childhood living aboard the 45-metre, 300-ton schooner The City of New York. Famed for its role as Admiral Byrd’s Arctic expedition vessel, The City of New York was captained by Patsy’s father, a man the Saturday Evening Post once referred to as ‘The Incredible Captain Kenedy’, and the only individual other than Winston Churchill, to whom they dedicated four consecutive articles during their long history. 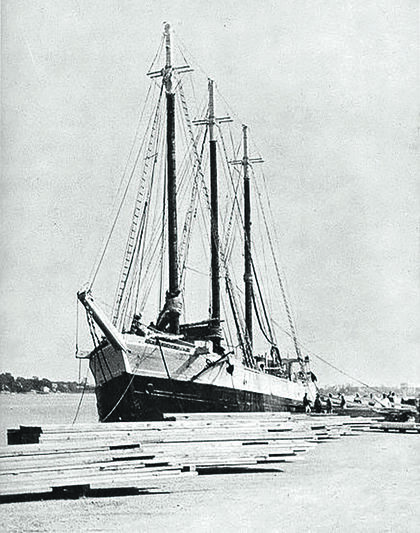 Captain Kenedy is known by many as one of the last true schoonermen of America, who traded goods up and down the US coastline. The City of New York hauled everything from lumber, salt fish and Christmas trees, and Patsy learnt the tricks of life aboard yachts long before most. By the time the family moved onto the 62-metre three masted schooner Vema at the age of 5, Patsy was an old hand at sea. After two summers chartering the ship, previously known as Mandalay, the family moved onto a 24-metre yacht called Alpha. By that time Patsy was 11 years old, she was solely responsible for furling the jib out on the bowsprit.

The Kenedy’s began to charter Alpha in the Bahamas and before long the family permanently moved to the fairer climes. Patsy, ever the enthusiast on the water, was by then a sharp hand onboard and a skilled sailor and navigator, she had bought herself a 16-foot dinghy called Tipky – short for ‘This is Patsy Kenedy’s yacht’. She turned her hand to racing whenever the big yachts arrived for the SORC offshore regattas. At the age of 18 she took a job as a stewardess for Bahama Airways, racing cars and yachts whenever she touched the tarmac, eventually securing herself a delivery job aboard Ted Turner’s American Eagle.

Before long Patsy was managing the deck, earning $50 per week as the only paid crew aside from the captain. Under Patsy’s tenure American Eaglewent on to become one of the most well known yachts in her class, eventually winning the World Ocean Racing Championship in 1971. Patsy left the yacht after two circumnavigations, taking the role as captain aboard the John Alden’s schooner Ululu, ex. Chauve Souris, chartered on the islands and owned by maverick yachtsman and ex. CIA spy, Bill Bolling. 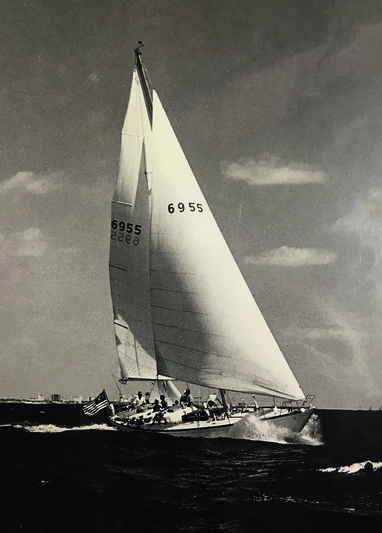 Bill had already begun the venture of refurbishing down-on-their-luck yachts when he met Patsy, although it wasn’t long before she joined the enterprise and brought her own wealth of knowledge to the endeavour. Between them they restored 13 vessels over 35 years, but in 1972 they were in the foundation stages of this extraordinary enterprise. Having just completed the restoration of the famous Islander 55 Charisma, which they’d sold to Senator Ted Kennedy, they purchased themselves a Bentley R-Type as the mark of a job well done. One day word came along the ‘waterfront telegraph’ that a big schooner was laying up the Miami River in desperate need of their expertise. 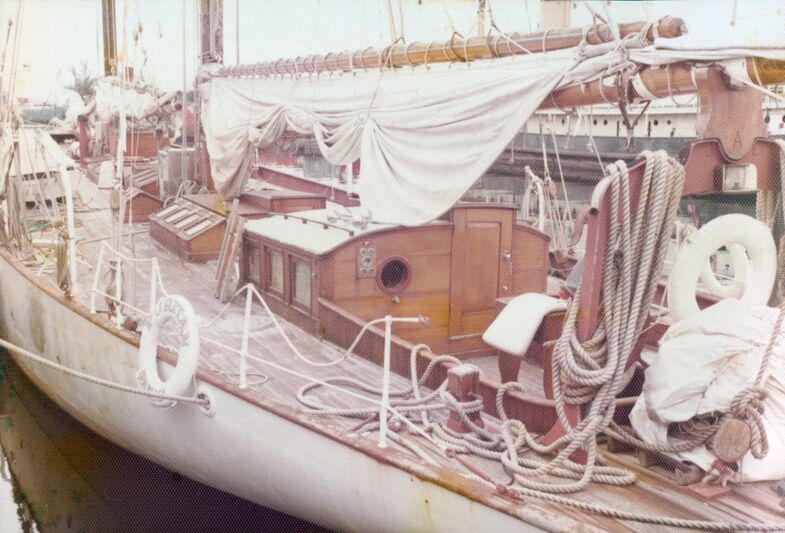 Photo: Patsy Bolling By 1973 the 1931, 38.4-metre Alden schooner Puritan, was far removed from the gentleman’s yacht of her glory days. A rusting hulk of a hull, abandoned and storm wrecked, the yacht had come to rest down the way from the Merrill Stevens Shipyard and was in dire need of attention. Patsy and Bill looked upon her with tears in their eyes, but their excitement surpassed their distress at her mistreatment and after a long hard negotiation, they sold the Bentley and put down the deposit on the schooner. 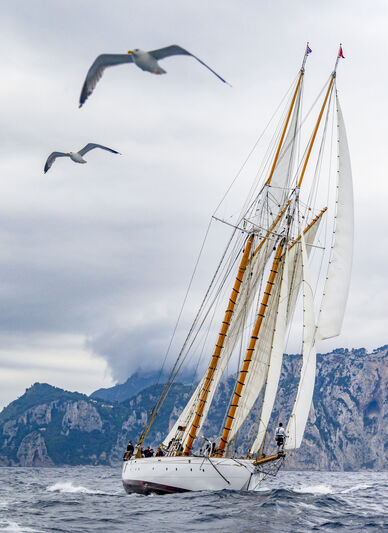 Photo: Blue Passion PhotoThe story of Puritan’s resurrection is one that inspired many budding yachtsmen to take on the challenge of restoring the classic yachts which were left to rot in shipyards from Nova Scotia to Newquay. Over the course of 18 months, Patsy, Bill and their motley crew of students, engineers, deckhands and friends, set about one of the most impressive restoration projects imaginable. Driving the schooner hard into the mud at the Riverbend Marina in Fort Lauderdale, the team set to work, gradually removing the rust, grime and decay and bringing Puritan, with her graceful lines and elegant interior, back to life. 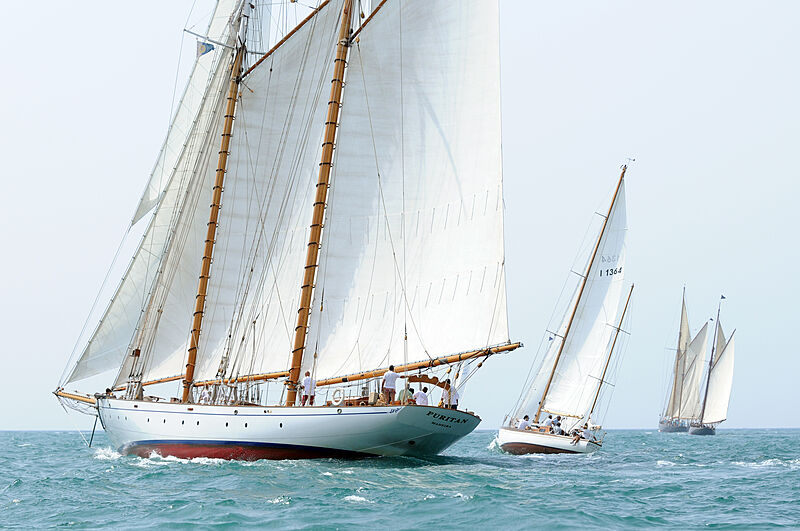 Photo: The Classic Yacht Experience After the work was done, 22,000 man hours had been poured into the job and the crew set off for a highly celebrated cruise. Taking in the sites up the East Coast, Patsy sailed Puritan up to Lunenburg, the first schooner to enter the river since her father sailed Vema down it for the last time twenty years before. 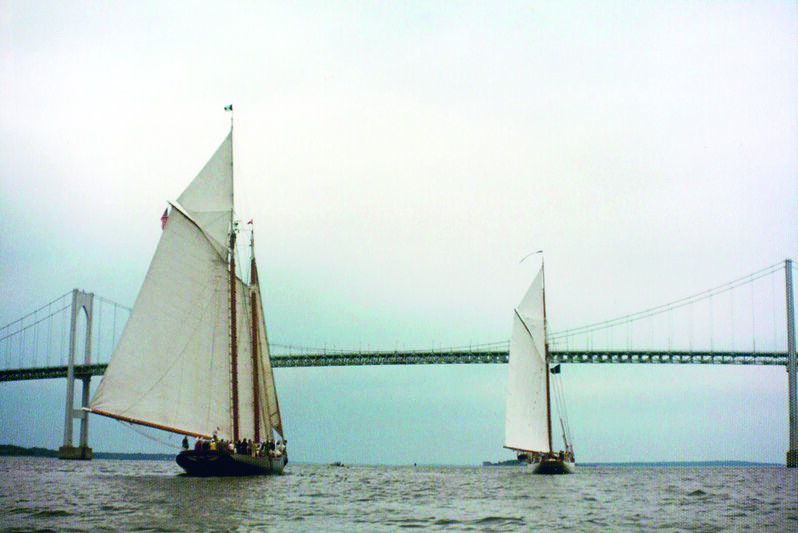 Photo: Patsy Bolling In 1974 they spent a raucous season first sailing Puritan around her original sailing ground (she had been launched in Groton, Connecticut at the Electric Boat Company, now General Dynamics), before heading south to the Caribbean. On one spectacular occasion, Puritan was moored up next to the replica of the schooner America, whose victory at Cowes in 1851 founded the America’s Cup. Crew from the two schooners challenged one another and Bill Bolling led Puritan to an extraordinary victory against the legendary competitor. 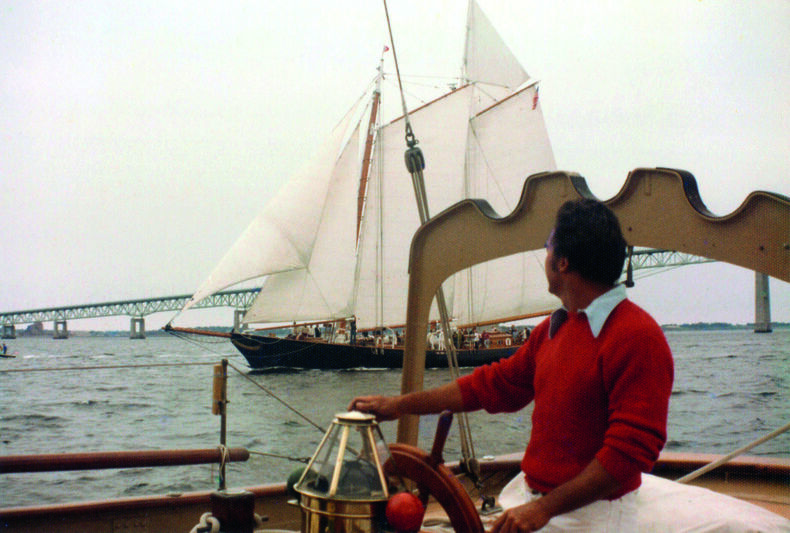 Photo: Patsy Bolling Though their time aboard Puritan had been some of the sweetest in their lives, it had never been their intention to keep her. By June 1974, the deed had been signed and Puritan was sold to an Austrian chemicals inventor Oskar J. Schmidt. For the Bolling’s this could well have marked a break in their life on boats, but though they took a short hiatus within two years they had purchased themselves a Stedel trawler called Picaroon.

In the years that followed the Bollings owned and sold a host of vessels, including the 24-metre sailing yacht Pez Espada and a Trumpy motor yacht called Jaru. Eventually they were ready for their next challenge, a 37-metre Icelandic Coast Guard vessel called Albert, which they’d bought in a state of disrepair not dissimilar to how Puritan had been found in 1973. 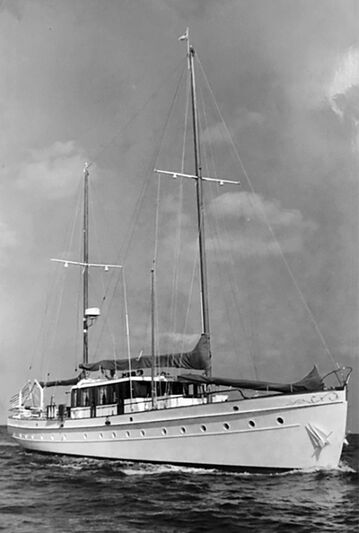 Albert, though originally a working vessel was beautifully appointed, with eight panelled staterooms and a generous saloon she made an excellent charter yacht. With their Cessna 185 Amphibian tied up alongside to ferry guests to and from the shore, the Bollings cut an eccentric figure on the charter scene. Unfortunately for the Bollings, the US Coast Guard had other ideas, regularly stopping the yacht to search her for smuggled goods (due to her previous occupation she looked considerable like a military vessel), eventually leading to their decision to sell. 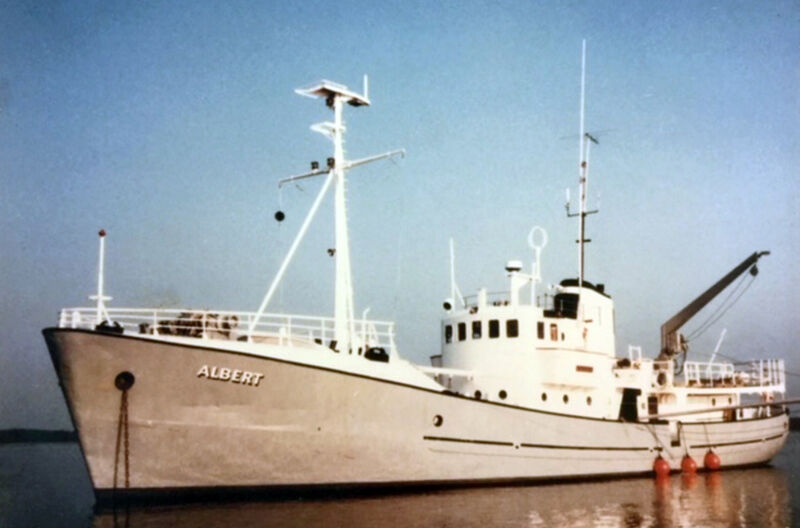 Photo: Patsy Bolling Albert was to be the Bollings final big yacht, after her sale they “swallowed the anchor”, as Patsy puts it, and moved their lives ashore. Over the last few years Patsy’s life on yachts has been relit and she now attends the Mediterranean regatta circuit as part of the crew aboard Puritan.

Considering her life on boats, Patsy commented, “I have had a wonderful adventurous life, doing all things exciting. Sailing, racing cars and flying airplanes, thinking I was bullet proof.

My husband Bill and I rebuilt boats, many of them “White Elephants''. Folks were telling us we were crazy to take on such projects. Little did they know we loved and worked well together and with Bill's vision, we were able to rebuild and enjoy the vessels as our home until they were sold. Reflecting on my many years at sea and all the memories of exciting times under sail, will carry me through these difficult days that are upon us.”