As part of a planned expansion into the Russian market, Oyster Marine has appointed Alexander Markarov as exclusive representative for the Russian Federation with immediate effect. 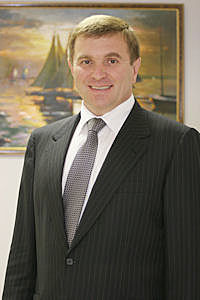 Based in Moscow, Alexander is an experienced yachtsman and has over 16 years experience in the marine industry, including founding the Moreman chandlery and equipment business, which represents a number of leading marine brands.

Alexander, who is currently President of the Russian National Marine Industry Association (NMIA), is credited with starting the first private Yacht Club in Moscow, the Avrora Yacht Club, where he is Commodore, and is an enthusiastic racing helmsman.

Oyster CEO, David Tydeman, commented, “I am delighted Oyster Marine will be working with Alexander on our ambitions for the Russian market. In this complex world we now live in, local knowledge is vital and Alexander and I share common views that there are many Russians enthusiastic to trade either their motor yachts or their caviar for an Oyster!”

Oyster Marine is exhibiting at the Moscow International Boat Show (9-12 April) where Alexander looks forward to meeting you.