Without doubt, the Yacht Club Costa Smeralda (YCCS) was the perfect venue for the Oyster Jubilee Regatta, the 25th event in the Oyster Regatta series. Thirty stunning examples of the Oyster range took centre stage in this glamorous marina, on the magical island of Sardinia for five days from 21st to 25th September 2010. The allure of the Oyster regattas is worldwide, with the Oyster fleet in Porto Cervo flying the flags of eight different nationalities. 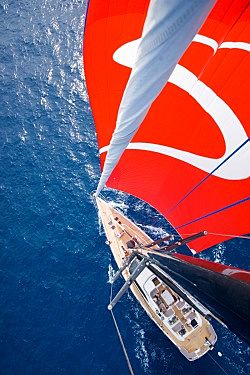 The 30-strong fleet started the first race of the event on schedule on a stunning 15-mile coastal course, using the granite islands of the La Maddalena archipelago as natural buoys. Azure blue sky and warm breeze typified the sailing grounds of the Costa Smeralda and the first race day was no exception.

In Class One, local knowledge was advantageous to Alberto Vignatelli, as his newly launched Oyster 72, AlbertOne 3, took line honours and a corrected time victory. Vignatelli has been a Member of the Yacht Club Costa Smeralda for over 20 years and knows this regatta course better than most. 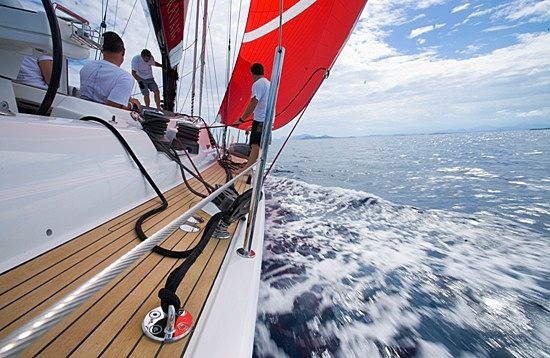 After a leisurely afternoon, the 250 owners and guests boarded coaches to drive the short distance to a glittering cocktail party and dinner at the Hotel Romazzino. Nicknamed, "The white one", Busiri Vici's flowing design of whitewashed rounded walls and terraced arches gave this stunning hotel its signature style.

A lack of wind caused a delay to the start of racing for day two of the Oyster Jubilee Regatta, but the international fleet showed their fun-loving nature during the postponement. None more so than Hailey Lawrence, the Australian crewmember, whose highly accomplished water-skiing demonstration behind the new Oyster 82,Starry Night of the Caribbean, was a moment to savour. It was several hours before racing could get underway and owners and crews on three of the Oyster 56s decided to take to the water; over a dozen sailors from Temerity, Rock Oyster and Spirit of Spring leapt from their yachts, en-masse, to cool off. The fun and games alerted several inquisitive dolphins to the starting area, quite apt, as the day's race was in fact sponsored by Dolphin Sails. 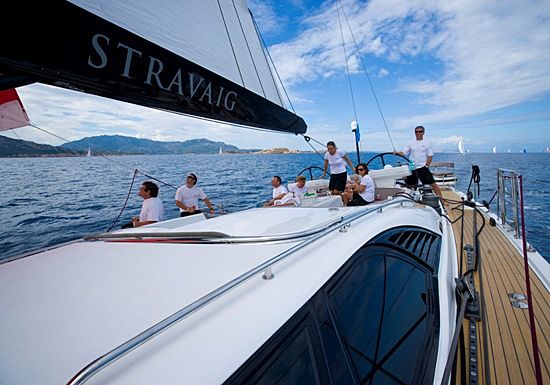 After the delay, the second race organised by the Yacht Club Costa Smeralda in Sardinia got underway, with approximately 6 knots of easterly breeze. The fleet enjoyed a short race, heading for the spectacular islands of Mortorio and Soffi and finishing just outside the entrance to Porto Rotondo.

Overall leaders with two races completed were Trevor Silver's Oyster 655, Roulette V.2 in Class One and Sarabande, the Oyster 54 owned by Gerd and Annemarie Kohlmoos, competing in Class Two.

The Oyster 82 Pandemonium, owned by Stuart Smith and Barry J Cooper Jnr, was the fastest around the course in Class One, but victory on corrected time went to Roulette V.2, followed by the Oyster 62 Luna of London with Heinrich Schulte's Anabasis in third. Following Roulette V.2 at the top of the overall table were Anabasis and Richard Smith's Oyster 655 Sotto Vento. 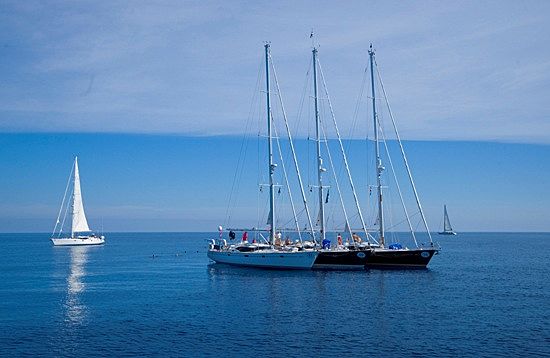 In Class Two it was the Oyster 575, Boarding Pass III that took line honours with Sarabande hot on her heels, just three seconds behind. On corrected time Sarabande took first place ahead of Boarding Pass III, owned by Bill Munro and Susan Harris, with Stuart and Caroline Popham's Spirit of Spring in third.

The evening's hospitality was second-to-none as the Oyster fleet moored in the safe confines of the Yacht Club Porto Rotondo. 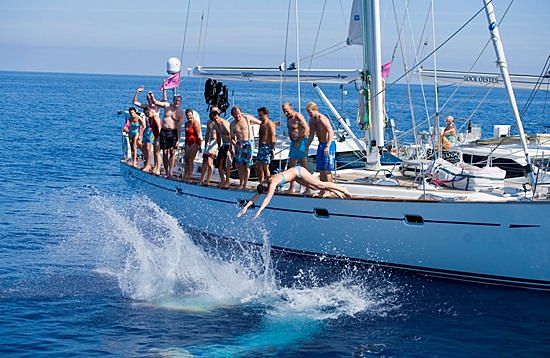 Day 3 - Clash of the Titans on the penultimate day

Day three of the Oyster Jubilee Regatta in Porto Cervo showed the sheer power of the Oyster range. The thirty-yacht fleet was fully tuned up, enjoying a top wind speed of twenty knots. It was an incredibly exciting day for the entire fleet, but the highlight was the titanic battle between the two Oyster 82s at the front of the fleet, Starry Night of the Caribbean and Pandemonium.

Pandemonium owned by Stuart Smith and Barry J Cooper Jr had a three-hour close encounter with Starry Night of the Caribbean, skippered by Philip Scully. There was a full on match-race from the start, right to the finish. It was a powerful display with seldom more than a boat length between these two magnificent yachts. 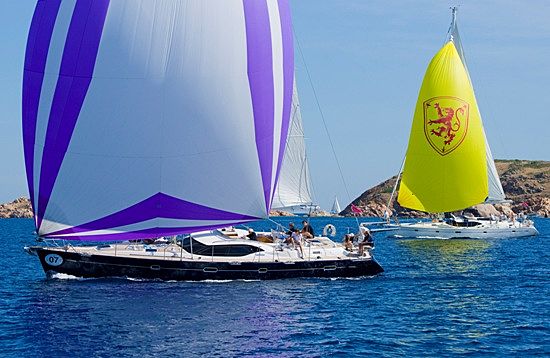 Starry Night of the Caribbean got away well, but a textbook gennaker hoist by Pandemonium gave them an early advantage. As the breeze built, the two Oyster 82s were an impressive sight, locked in battle, heading for the rugged island of Monaci. On a tight reach, but beautifully balanced, Pandemonium and Starry Night of the Caribbean were inseparable. Huge gusts of wind were emanating from a squall offshore but the two yachts were in perfect control, as they jibed in perfect choreography. The next mark was Seca di Tre Monti, a rock marking the entrance to the staggeringly beautiful Gulf of Arzechena. The two giants continued their duel squeezing through the narrow gap between the mainland and Bisce Island, with time-aged granite outcrops barely feet away, the two yachts were grappling for the lead.

With some excellent boat handling, Starry Night of the Caribbean managed to break the deadlock, taking a slender lead and the gun but Pandemonium beat their rivals on corrected time to win the clash of the titans. After racing, the crews of the two Oyster 82 yachts exchanged good wishes, gentlemen to the last. Pandemonium was the victor but they had both enjoyed an exhilarating day on the water at the Oyster Jubilee Regatta. 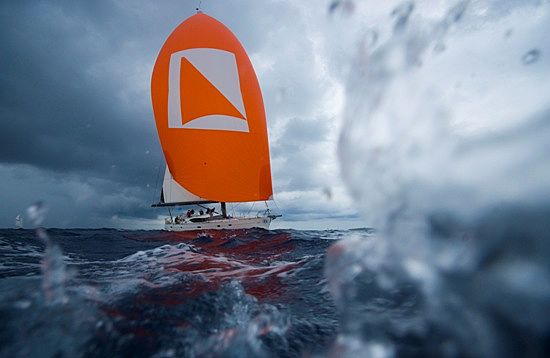 Overall leaders at the conclusion of the day's racing and heading into the final race day were Trevor Silver with his Oyster 655 Roulette V.2 in Class One (yachts over 60ft LOA) and Gerd and Annemarie Kohlmoos with their Oyster 54 Sarabande.

Sarabande continued her domination in Class Two taking line honours as well as her third corrected-time victory. The 56-foot Rock Oyster, owned by John Marshall, took second place with the Oyster 46 Solway Mist of Kippfordowned by Alan and Shirley Cook in third place.

Following the complimentary after-race refreshments on the Yacht Club Costa Smeralda's Piazza Azzurra, owners and their families attended a Cocktail Party on the Club's poolside terrace, which enjoys stunning views over Porto Cervo Marina and the village beyond. 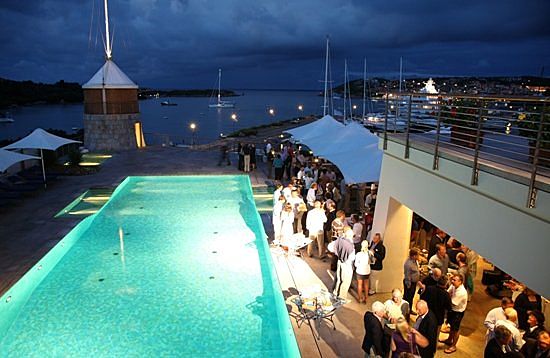 On the final day of the Oyster Jubilee Regatta, the international fleet of Oyster yachts remained dockside at the Yacht Club Costa Smeralda as the infamous Mistral wind arrived, gusting up to 60 knots and howling along the rugged coastline.

With no racing on Day 4, which was sponsored by Pantaenius, the overall results after the three days of racing became final and the winners of the Oyster Jubilee Regatta were Trevor Silver with his Oyster 655 Roulette V.2 in Class One and Gerd and Annemarie Kohlmoos with their new Oyster 54 Sarabande in Class Two. Prizes were also awarded to the winners of each day's race and for the Concours d'Elegance during the prize giving ceremony at the Yacht Club Costa Smeralda's Clubhouse, which was presided over by Club Director, Enrico Molé, Sports Director, Edoardo Recchi and Oyster CEO David Tydeman. 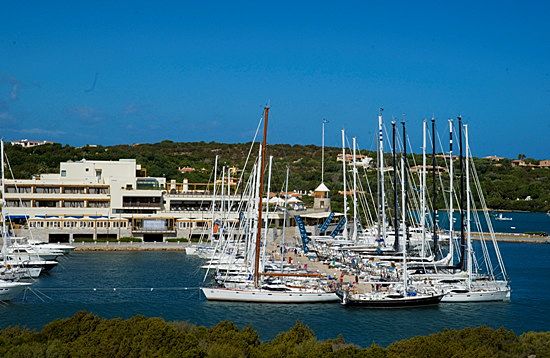 Following the final prize giving, owners, crews and the Oyster team closed the event in style at a Gala Dinner hosted by the YCCS. Fantastic food and wine, great company and the music from the band flown in specially from Milan for the event had owners and crews partying into the small hours.