On 10 July 2007 Oyster signed a commercial agreement with RMK Marine to build the new Dubois designed Oyster 100 and 125 yachts at their yard in Istanbul Turkey. 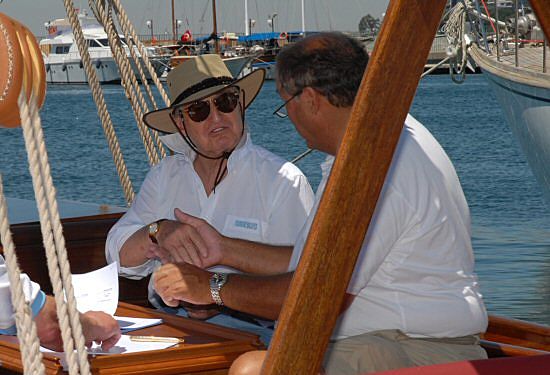 The cockpit of Lady Edith was chosen as an ideal signing place for an agreement under which RMK Marine will construct female tooling, mould composite hulls and fit out the new Dubois designed Oyster 100 and 125 yachts which Oyster Marine will market worldwide.

The project will start with the 100 model, tooling for which is expected to start in the third quarter of 2007 with the first yacht scheduled for completion at the end of 2009.

After the signing Matthews, Dubois and Koç hosted a reception attended by over 40 members of the Turkish press and TV. Interest in the Oyster/RMK Marine deal was measured next day by extensive coverage in the Turkish national press.

Promotional drawings for the Oyster 100 are expected to be released within the next two weeks, while specification and price will be confirmed before the boat show season in early September.

Drawings and prices for the Dubois designed Oyster 125 will be available in October and tooling for the 125, launching in 2010, will commence next year.

Koç is Turkeys largest group and represents 11% of Turkeys GNP. The Koç Group are currently ranked 200 in the Fortune 500 list of companies worldwide. RMK Marine is currently building a 170 ft S&S designed yacht to be launched towards the end of 2008, which will benchmark quality for the Oyster 100.