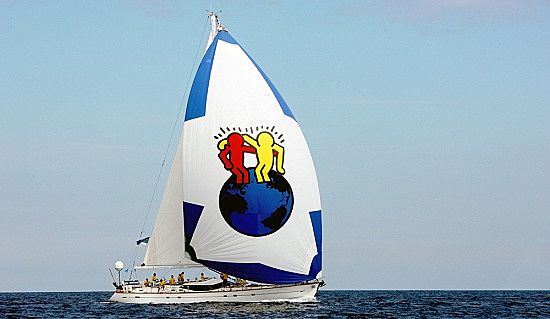 The Tahiti Pearl Regatta started from beautiful South Pacific island of Raiatea. Situated between Bora Bora and Tahiti, Raiatea is known as the 'sacred island', the cultural heart of all Polynesia. The Island has a fascinating history filled with legends, as well as the regions most significant archaeological sites. The competitors enjoyed two days of festivities including a night parade at Uturoa harbour with a Polynesian show, including traditional songs and dancing.

The race to Huahine Island was a memorable occasion; the lush tropical island is arguably the most picturesque in all of French Polynesia. Steep mountains rising above secluded bays with breath-taking emerald green water and stunning sandy coves makes the island one of the most sort-after locations in the South Pacific. However, the island is very sparsely populated and can only be visited by boat. Relaxing and stress free, Huahine is a place to find solitude and peace.

The race to Huahine was a lively affair with 20 knots of easterly wind making for a fast passage. The final part of the race was downwind, giving a spectacular spinnaker finale. With an international Oyster fleet, the USA Oyster 82, Pandemonium took line honours in the monohull class completing the 14-mile race in two hours but after time correction, the class winner was British owned Oyster 655, Proteus. The race back to Raiatea was a light airs affair. After the racing programme was completed the Oyster class was won by the German owned Oyster 56, Mariela. The Swiss Oyster 575, Satika was second and the Oyster 655, Proteus was third.

Speaking after the regatta, the Oyster 82 Pandemonium skipper said: "We are very pleased and proud to represent the Oyster Family here at the Pearl Tahiti Regatta, racing in a remote location can cause issues especially if by pushing the boat, things get broken. However, Oysters are well engineered and big thanks to Debbie and Eddie from Oyster, we have had 'on location' customer service throughout the world rally. We love the diversity of the people taking part and the scenery is just fantastic. The festivities ashore have been wonderful, especially the Polynesian night put on by locals, which was spectacular and really entertaining to see sailors joining in with the dancers! All of the Pandemonium crew have really enjoyed the regatta."

The finale for the Tahiti Pearl Regatta was a fabulous crew night under the theme of Pirates of the Pacific. Competitors enjoyed fabulous Polynesian fayre under the moonlight with Hula dancing and traditional music.