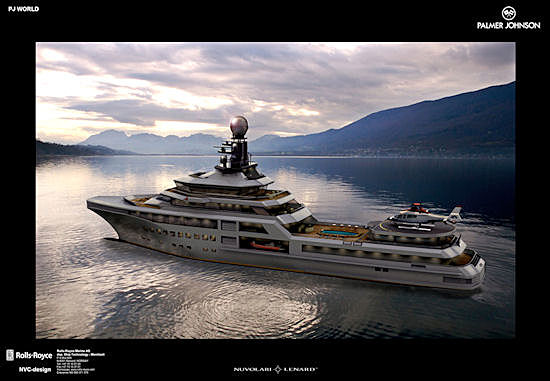 Having acquired the Norwegian shipyard Flekkefjord Slipp & Maskinfabrikk’s which is one of a handful worldwide with experience in building complex seismic, research and exploration vessels, Palmer Johnson Norway adopts a new approach whereby the starting point is to optimize the vessel’s design to its operational profile. Exemplifying this groundbreaking approach, specific to the PJ World Yacht- a Rolls Royce UT hull is optimized to a Diesel-Electric Azipull Propulsion system to cultivate a multitude of operational benefits. The design reduces the loss of speed in head seas, reduces vibration and noise levels, improves the vessel’s manoeuvrability and control and contributes to the vessel’s “Clean Class” notification. Further, improvements in propulsion efficiency reduce the required level of installed power therefore reducing both the running costs and the emission of harmful gases. 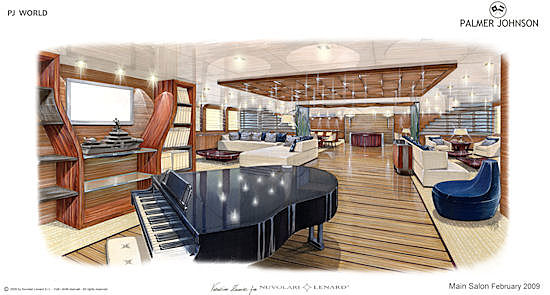 The Diesel- Electric Propulsion system not only contributes towards the DNV “Clean Class” status, it also allows for greater operational flexibility. The captain can match the number and type of engines that are run to the desired transit speed and on-board hotel load in any set of conditions. The vessel can run with full hotel load at full speed on the main diesels without requiring generators; it can travel at 13 knots on one main engine or at 6 knots on one auxiliary generator set. The vessel can operate on any combination of mains and auxiliaries that match the hotel load and speed at the given time offering optimum controllability.

Exceptional station-keeping capabilities are achieved via Dynamic Positioning on the PJ World allowing the vessel to be “moored” in environmentally sensitive or restricted areas without the traditional use of lines or anchors. Instead, the onboard propulsion system and thrusters work together to control the position by centralised automatic responses to variations in sea conditions. Other features include a Certified Heli Deck, Heli hangar, an optional garage designed for a six man Discovery submarine, and a superior Rolls Royce at-rest stabilization system. Security features such as water cannons, forward scanning sonar, thermal imaging, closed circuit television and acoustic shields are also available on this vessel. 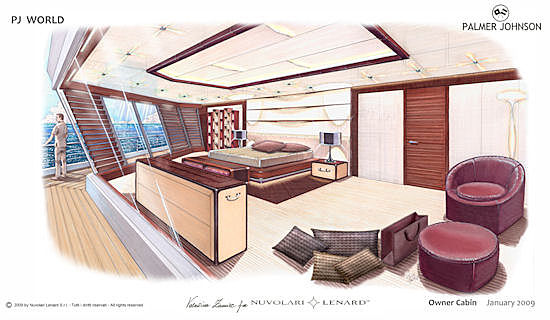 True to the Palmer Johnson identity, Italian designers Nuvolari-Lenard have ensured the six-deck interior and exterior living areas provide the highest degree of comfort. Focusing on well-being, healthy living and relaxation, large open spaces are emphasized and extensive panoramic sea views create an open environment for ocean voyages. The owner’s apartment is situated on the fourth, fifth and sixth decks comprising of bedroom suite, walk-in dressing room, separate business and private lounges, office and a Jacuzzi sundeck with 360 degree viewing. One of the first features to be seen on this Superyacht is the novel aft beach house which looks forward onto an outdoor swimming pool deck. Adding to the list of luxuriant features are a fully equipped gym, spa with Hammam, sauna with treatment room, cinema, piano foyer and infirmary.

The layout design shows a high consideration to the separation of crew and guests. A maximum crew of 27 can be accommodated according to the General Arrangement of single, double and triple berth cabins. Crew and staff living areas comprise a separate galley, mess two lounges and dedicated gymnasium. Special attention was also given to provisioning of the vessel along with generous dry, refrigerated and frozen storage. 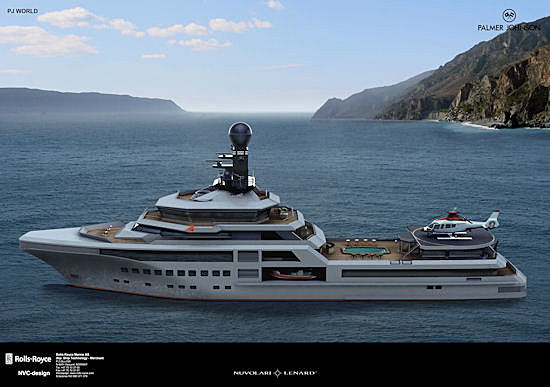 PJ World is destined to be another truly iconic Palmer Johnson design. By providing environmentally friendly solutions that heighten performance whilst reducing costs and utilizing robust, reliable systems proven in the most extreme North Atlantic Seas- PJ World promises to be a game changing feat of engineering and design excellence. Palmer Johnson World will transform the conventional concept behind exploration-style vessels and introduce a revolutionary ocean voyager for the future.