Pastrovich Studio has just released the latest superyacht concept from the Monaco based designer, Stefano Pastrovich. The studio describes the 77 metre X R-Evolution as a vessel with a ‘cool silhouette’ and ‘unlimited exploration.’ 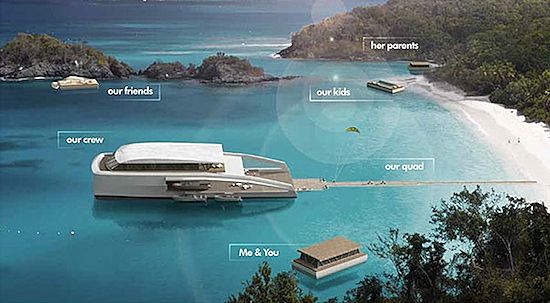 In place of guest suites on board X R-Evolution are daughter vessels which, combined with an inflatable, modular jetty connected directly to the beach, means that guests can move freely between the mother ship and their own private apartment. The apartments can be deployed where the owner’s and guests desire, giving them the option to be waited on hand and foot by the crew living aboard the mothership or to go it alone in a private beach front apartment.The vessel will have capabilities to store jet skis up to 15 metre explorer ribs, as well as a wide range of water toys.

The lightweight hull is made in carbon fibre, floating decks in titanium, whilst the large opening and superstructure are also built in lightweight materials. The yacht achieves its shallow draft through a multihull design, also contributing to the boats stability. This platform allows us to achieve a remarkable amount of deck space for the length, and enabling to design an interior which works from port to starboard rather than the traditional forward to aft layout.

Through a system consisting of a self-stabilising hexapod with 6 hydraulic cylinders, movements in pitch, and roll is compensated for resulting in a completely level upper deck. A secondary system of gyroscopes reduces roll in the remainder of the vessel leading to an uncompromised level of comfort while at sea.