She offers accommodation for up to 10 guests. On the main deck there is a large owner’s stateroom, that includes a large walk in wardrobe, and a stunning large bathroom, which features a king size bathtub. There are four large sized guest cabins on the lowerdeck, two twins and two doubles. 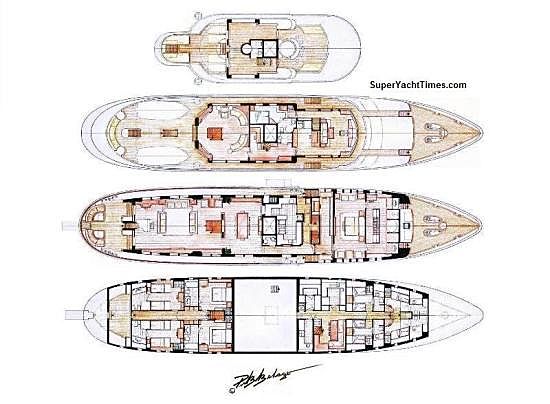 The main deck features a large main saloon, and separate formal dining room. On the bridge deck there is another large, less formal salon, as well as the ship’s office and captain’s cabin. Two tenders are stored in the traditional location, of the bridge deck aft. The sundeck features a Jacuzzi forward, and several sunpads and sun loungers.

An interesting design feature are the yacht’s exterior stairs, leading up to the upper aft deck, and the sundeck. They are placed on the centerline of the yacht. The aft deck itself features built in seating against the aft bulwarks of the traditionally rounded stern.