Tom Clegg has been awarded winner of the Queens Silver Medal by the Worshipful Company of Shipwrights as the Shipyard Apprentice of the Year 2010. This is one of the country’s most prestigious apprentice awards and has been presented to representatives from the ship building industry since 1945.

Annual nominations for the Queens Silver Medal come from every yard in the UK with assessment taking place during several stages. Entrants are shortlisted to participate in a week long course and evaluation in Northumberland, following which six are selected for interview by the committee in London before the awards are announced. 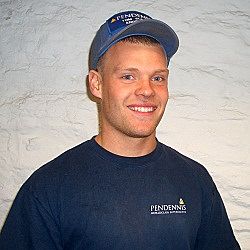 “The course in Northumberland was extremely demanding” explains Tom. “We were presented with a wide range of challenges, aimed at testing our leadership and teamwork skills as well as individual capabilities. The tasks ranged from physical trials such as overnight hikes and raft building, to ones which tested our endurance and mental capabilities. For instance we had to guard a flag throughout the night on one occasion, and on another morning we were subjected to interviews at 4am. Although it was a tough week it provided a unique opportunity to develop new skills and gain confidence in dealing with challenging situations.”

Tom, who graduated from the apprenticeship scheme in September, is now employed as an engineer at Pendennis and currently working on the winter refit of SY Adela.

Jill Carr, head of the Pendennis General Apprenticeship scheme, told us “It is representative of the high standard of our course that four apprentices were selected to be part of the initial assessment in Northumberland – only sixteen apprentices from throughout the UK were invited to attend this week. We are extremely proud of Tom’s achievement as the winner of this historic award.”

Tom completed his apprenticeship in conjunction with Cornwall College: “Tom was always incredibly hard working and committed throughout his apprenticeship. I’m delighted for him that his efforts have been recognised by this prestigious award and wish him all the best in his career with Pendennis Shipyard.” said Vaughn Curnow, Liaison Officer from Cornwall College Business who worked with Tom throughout his studies.

The General Apprentice Scheme at Pendennis has a formidable reputation with several awards gained over the past few years, including ‘Winner of the Year’ in the National Training Awards in 2009. The scheme continues to gain recognition not only due to the dedication and organisation of the apprentice management team, but also because of the high standards and hard work of the young people on the course. At the recent Faculty of Technology Awards at Cornwall College the following awards were presented: Matt Angove was awarded "Student of the Year" in Level 2 Engineering; Sam Proud was presented with "Most Improved Student" in Level 2 Electrical; Andrew Heard was named the "Most Improved Student" in Level 3 Electrical and Dan Buckland was given the "Endeavour Award" in Level 3 Engineering.