Funds raised through Movember’s UK campaign benefit The Prostate Cancer Charity (TPCC), the UK’s leading prostate cancer charity. The challenge is simple – start Movember clean shaven and spend the entire month growing a moustache, with money being raised from sponsorship, charity boxes placed around the yard and donations from suppliers. 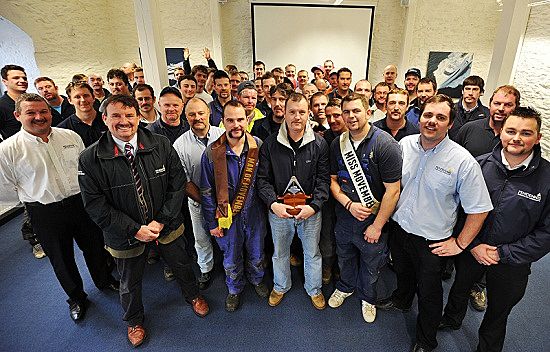 The target at Pendennis for this year’s Movember was to increase the level of participation within the yard and as a result improve the fundraising. Pendennis’ MoBros had no problems smashing the targets for both. In 2010 35 members raised a total of £3,509.53. This year an impressive 72 members, including Managers and Directors, signed up - almost a third of the workforce.

At the end of the month several awards were presented. The most impressive moustache was given to ‘Man Of Movember’ Craig Pound and a ‘Miss Movember’ sash was a fitting prize for the least impressive results, presented to Chris Pollard after a combined vote by the MoSistas, who formed the judging team, and the rest of Movember participants.

Pendennis’ in-house trades also competed against each other for the newly introduced ‘Pendennis MoBro Award’ given to the trade team that raised the most money. The trophy was designed by Mike Marchant and awarded to the Office team who collectively raised an impressive £1,450. The runners up were the Joiners who raised £839.20, followed in third place by the Electrical department who collected £688.50. With money still rolling in the biggest individual fundraiser will be announced at the Christmas yard meeting later in December.

An additional incentive was given by the Directors of Pendennis who offered to boost the total by a further £1,000 once the total reached £6,000. The MoBros had no problems reaching this target and so this generous donation increased the final total to over £7,300.00.

Simon Truen who organised the fundraising at Pendennis, commented “The support throughout the yard this year has been overwhelming. It is such a fantastic result both in terms of the money raised and the increased level of awareness to such a deserving cause. I would like to thank everyone who took part and the trade reps and management for supporting the event.”