The 40m Dubois sloop Tenaz recently left Pendennis following a 6 month successful refit. The yacht was originally launched by Pendennis back in 1996 and has remained one of the yard’s best loved projects. 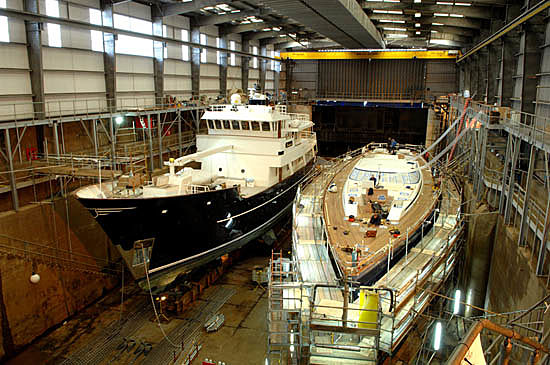 Following an extensive world cruise with her new owner and his family, it was decided to bring Tenaz back to Pendennis so those that built her could make her better than new again. Taking advantage of the yards history with the yacht the original new build project manager was assigned the task of, in the words of the owner “putting the yacht back to how she was when launched”.

This involved a top to bottom, interior and exterior repaint, refurbishment of the teak decks, general interior re-touching, main engine exhaust rebuild, maintenance and updating of rigging and systems and general electrical and mechanical refurbishment.

Following the completion of the refit the owner commented “We have been very impressed with the Pendennis commitment to quality and to supporting their owners. We first started working with them when we were in Thailand and Malaysia where they flew staff out to assist us with some issues we had. Also in Singapore one of the engineers who worked on Tenaz when she was being built flew in to help with a steering issue. The focus on customer satisfaction coupled with the continuity of their staff made bringing Tenaz back home the natural choice.

He continued “The love they have for her has been evident from the start and the pride they have taken to make her better than ever shines through every detail. We are glad we made the choice to bring her home and look forward to racing her together in Palma.”

Following successful sea trials the yacht left Pendennis bound for Palma, where she will be in action at the Superyacht Cup with a combined Pendennis/Tenaz team and a few special guests. The newly refurbished yacht is being considered for charter throughout the summer in the Mediterranean and the winter in the Caribbean.