Leading figures from the world of industry, public sector and government gathered on the 10th December to celebrate training success stories up and down the country at the 23rd annual National Training Awards. 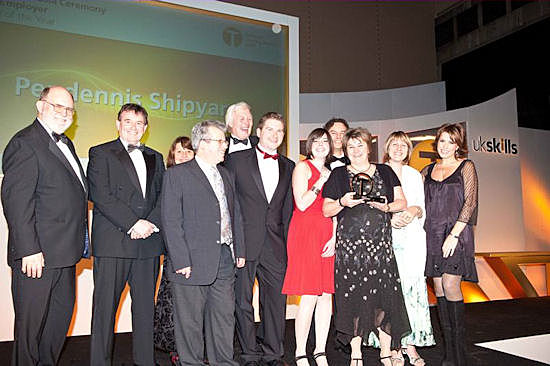 At a glittering ceremony in London hosted by Channel Five newsreader Natasha Kaplinsky, it was announced that Pendennis Shipyard in Falmouth, Cornwall has been awarded the coveted National Training Award ‘Winner of the Year’ in the Large Employer category. The company had been up against formidable competition including Nissan, Boots and the Fire Service.

Honouring its innovatory world-class apprenticeship programme, which has helped the business develop the skills it would need to build a workforce to steer it into the future, the National Training Awards recognised the company’s commitment to developing highly skilled tradespeople and future supervisors and managers.

Judges were particularly impressed by the level of craftsmanship and enthusiasm as a result of the apprenticeship scheme which have helped grow the business, whilst addressing problems the firm faced with the acknowledged skills and youth drain in Cornwall. Pendennis Shipyard had previously been named a ‘UK National Training Award’ winner at the National Training Awards’ South West Regional Ceremony held earlier in the year.

Organised on behalf of the Department for Business, Innovation and Skills (BIS) by UK Skills, the National Training Awards celebrate those who have achieved really outstanding business and personal success through investment in training.

Henk Wiekens, Managing Director, Pendennis Shipyard said: “The impact over the last 10 years that the apprentices have had on Pendennis has been outstanding. The scheme has achieved and often exceeded all of its original aims - from bringing down the average age of our workforce by a number of years to providing us with leaders of the future. We are honoured to be presented with a National Training Award.”