What's better than champagne sailing? Well if you're one of the select few sailing in the Perini Navi Cup off the Costa Smeralda, it was certainly more like Bellini sailing - 30+ knots from the west which provided spectacular conditions for the 18-boat fleet. 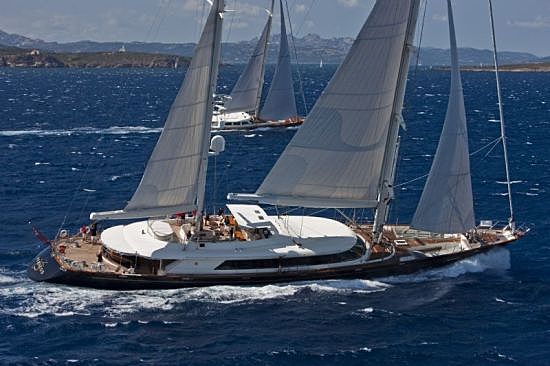 Racing started pursuit style with the smallest yacht in the fleet, Elettra starting first at 1205; thereafter the yachts started every two minutes, with the last yacht off the line, the 184-foot sloop-rigged Salute.

The YCCS race committee sent the fleet on a 25 nautical mile course that featured mostly reaching: from the start off Porto Cervo, it was a beat up to Monaci island, once around a reach down to the rocky islet of Mortoriotto, then back on the wind again, though almost a fetch to the finish off the entrance to Porto Cervo. 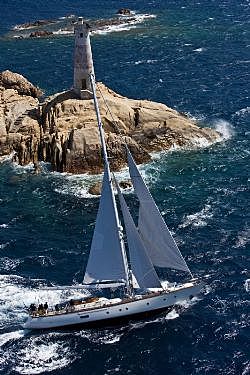 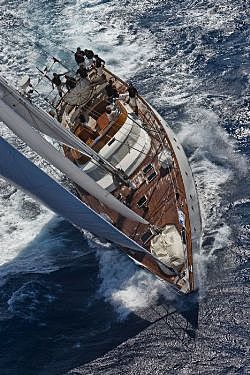 While the pursuit start sent the boats on a bit of a parade up to Monaci, once around the reach to the leeward mark saw the fleet compress, making for an exciting leeward mark rounding at Motoriotto.

On board Perseus, Bill Lynn, a guest helmsmen, reveled in the conditions, saying "We saw 40 knots a little while before the start, but it was great -- these boats handle just fine in that much wind, you just make the sails a little smaller and tell people to hang on a little tighter, and off you go. It's a totally different beast to sail, everything happens that much slower, but then you get down to that leeward turning mark and there's eight boats in a pretty small patch of water with rocks to the right, and rocks to the left, and you start getting a little nervous." 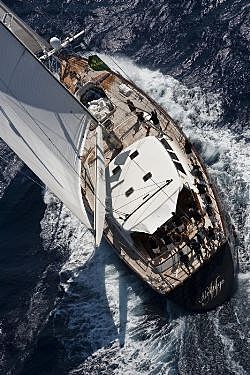 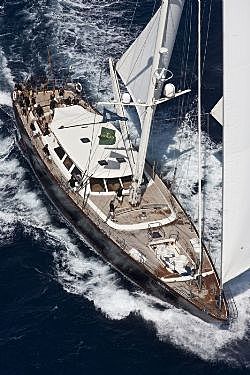 The fresh conditions took their toll with some breakages. On Perseus, the port mainsheet winch failed, preventing the crew from trimming the main on most of the last beat, but they managed with a jury-rig and will work to rebuild the winch for tomorrows race.

While Perinis are massive yachts, under cruising conditions they don't require a large number of crew to sail. But in racing mode, the crew numbers easily grow to 25 or so. Lynn explained, "We have the regular crew, the race crew which is about six or seven of us, guys that are here to race the boat, the owner and five or six of his friends, and a few other guests -- I'm not sure if they snuck on.I never saw them before!" 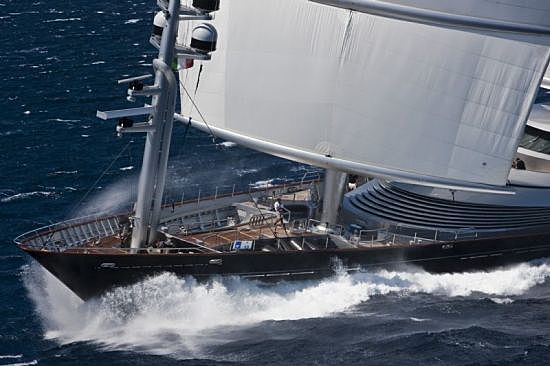 Even a sailmaker can venture a huge smile after a spirited day of racing in big breeze on big yachts, such as the 174-foot Atmosphere. Robbie Doyle, had first sailed Perinis years ago onboard Andromedea La Dea, and in the 2006 Perini Navi Cup on Maltese Falcon -- but he had never sailed the yachts in the strong conditions of today. Doyle said, "It was a testament to Perini that the boats all held together as well as they did. To sail in 30-35 knots and have as little damage done, well it's big change from five to ten years ago. In general, super yachts when they go racing, you sheet everything in that much harder, and that's when you break things. They've really resolved these systems very well." 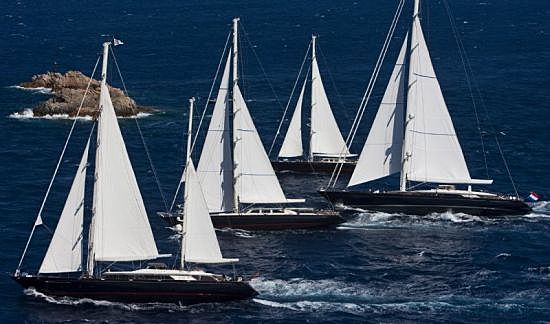 Doyle had high praise for the crew, "The owners son drove, he's a tremendous sailor -- a Melges 24 champion, so it's a little different sailing this boat, but he did an excellent job. But we were grateful we didn't have to put a spinnaker up today, since we haven't practiced it.

The 164-foot ketch Baracuda stood out with their dark carbon hull and lavender-colored sails a striking sight against the emerald water. Former America's Cup skipper Mauro Pelaschier helmsman onboard, said, "We sailed three days before the race, but in very light winds, so it was very exciting today, but difficult too as it's not easy to trim the sails in the strong breeze." 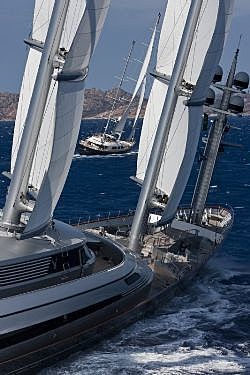 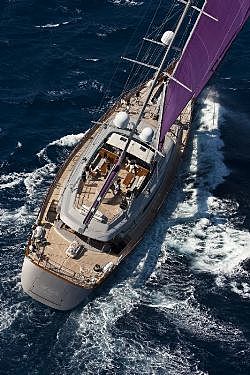 Baracuda was one of the last to start, and was several minutes late at that when another yacht crossed their anchor delaying their arrival on the race course. But they gained around the course and had a strong last beat, Pelaschier said, "We're training the crew, they're doing a great job. We know the boat a little better in strong breeze, so we do something better tomorrow. 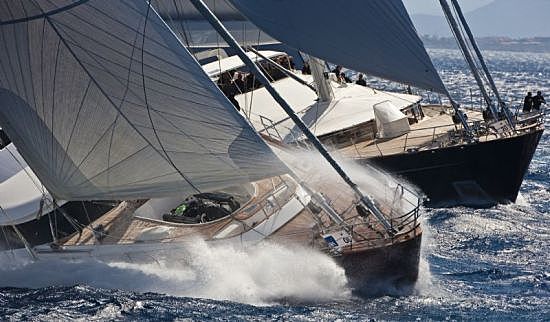 Tonight's social program includes the Blue Mediterraneo Cocktail Contest and After Race Cocktail at the Bar Aqua in the Piazza Azzurra. Racing continues tomorrow with one race, first warning signal will be at 1200. 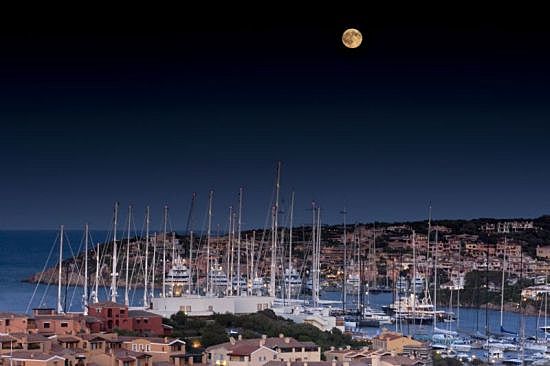