The Perini Navi Group is pleased to announce the launching of 45 metre sloop Fivea, the 48th unit in the fleet and number three of the series. The private launching ceremony will be held on Sunday April the 24th at Perini Navi’s Picchiotti facility. 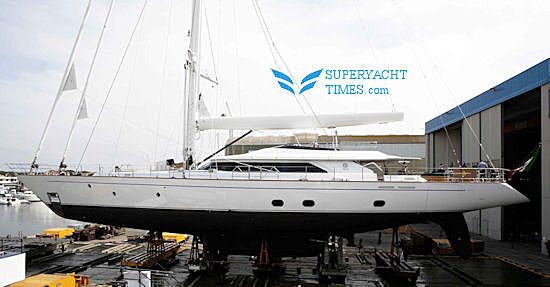 Fivea, the result of a collaboration between Perini Navi’s naval architects and Ron Holland, is the third steel-hulled 45 metre superyacht to be launched by the Perini Navi Group. She has two main differences in comparison with her sister-ship Heritage, the first yacht in the 45 metre series that was launched in May 2006 and Helios launched in August 2007:
• Twin Engine CAT C18 ACERT with central engine room;
• Updated Aluminium superstructure design with improved aerodynamics.

Fivea’s Perini Navi-built aluminium mast rises over 51 metres above the waterline and carries a sail area of almost 1,200m2 which is handled by seven of Perini Navi’s captive reel winches. Perini Navi electric furlers handle the in-boom furling system that stores the main sail within the carbon fibre boom.

The interior of Fivea, designed in-house by the Perini Navi Design Department, is a pure classic. The owner and guest quarters, are particularly versatile in that each stateroom can be transformed into a variety of configurations.