Helios, the result of a collaboration between Perini Navi’s naval architects and Ron Holland, is the second steel-hulled 45 meter yacht to be launched by this Italian shipyard. The third yacht in this class will be delivered to her owners in Spring 2009. 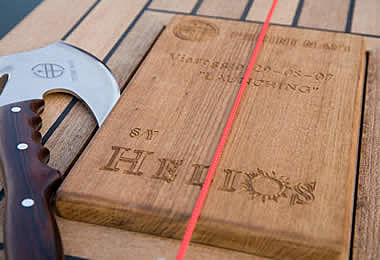 The extra displacement and, hence, increased wetted surface area of the steel hull was ingeniously absorbed into the design to ensure that added drag was kept to an absolute minimum. This was achieved by incorporating fine entry at the bow and a careful balance between generous beam in the aft sections and a long, clean run to the extended counter.

Efficient appendages, including a rudder with a relatively high aspect ratio and a drop keel, and a large sail area provides the best possible sailing performance for this ocean cruising yacht that boasts a particularly large internal volume.

The Perini Navi-built aluminium mast that rises over 50 metres above the waterline carries a sail area of almost 1,200m2 which is handled by seven of Perini Navi’s reel captive winches. Perini Navi electric furlers handle the in-boom furling system that stores the 432m2 main sail within the carbon fibre boom. Helios has two main differences in comparison with her sister-ship Heritage, the first yacht in the 45 meter series that was launched in May 2006:

The (36m2) fly bridge now offers a comfortable sunbathing area aft and a helm station forward. The opening stern reveals a structural staircase that descends to a 7m2 swimming platform which complements lateral shell door on the yacht’s port side.

The interior of Helios, designed in-house by the Perini Navi Design Department, is a pure classic. Mainly fashioned from mahogany and mahogany briar, the cabinetwork features an octagonal motif, a geometrical figure created specifically for the owners, is repeated on many of the yacht’s fittings, including handles, table bases, lights and decorations.

The owner and guest quarters, are particularly versatile in that each stateroom can be transformed into a variety of configurations.