Grenada will soon be featured in some of the top publications and television stations in the Caribbean Region. This news follows a successful regional media trip hosted by Port Louis developer Peter de Savary. Mr. de Savary invited journalists from TV-J in Jamaica, the Nation Newspaper in Barbados, the Trinidad Express, the Compass Magazine and the BBC Caribbean Report to visit Grenada. 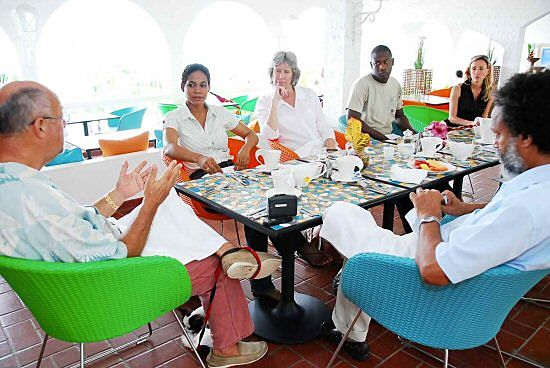 The journalists toured Port Louis, Mount Cinnamon and Mt. Edgecombe as well as other tourism related sites throughout the country. The purpose of the trip was to give the people of the region a real sense of the serious tourism development taking place in Grenada.

Among the group of journalists visiting Grenada was veteran broadcaster and columnist Anthony Fraser who is a correspondent for BBC Caribbean and Associated Press. Mr. Fraser says he was very surprised over the level of development taking place in Grenada. He noted that the Port Louis project would be very beneficial to Grenada and wished the developers well.

This media trip is part of Mr. de Savary's effort to promote Grenada regionally and internationally. Mr. de Savary has already invited over 50 journalists to Grenada from some of the world's top media organisations. British Airways in flight magazine High Life, the Times, the Guardian, All at Sea, Yachts International just to name a few. Mr. de Savary has committed to promoting Grenada as part of his investment thrust into the country. As part of his promotional efforts, he has branded his personal aircraft with the Grenada flag’s colours, created a magazine called Grenada Life which has a distribution of over 175 000 to the worlds most influential investors and tourists and promoted Grenada at the world's top boat shows in Europe and the United States.