The Phuket International Boat Show (PIMEX) has secured its home for the future with the signing of a five-year Host Venue agreement with Royal Phuket Marina (RPM), the award-winning 5-star marina and luxury lifestyle destination on Phuket’s east coast. Having recently announced the dates for 2014 being moved to the popular 9th to 12th January timing, organisers are laying strong foundations for the next decade. 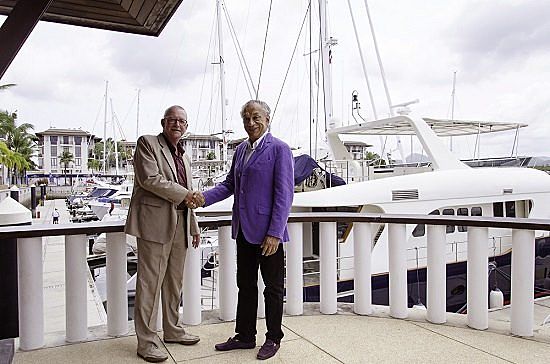 “The 2013 Phuket International Boat Show was the 10th Anniversary edition and over the last decade the event has seen continued growth and is the undisputed leading consumer boat show in Asia. We are now looking forward to delivering another decade of success for the regional marine industry, and are very happy to announce the signing of a five-year agreement with current home and Official Host Venue going forward, Royal Phuket Marina,” said Andy Dowden, Show Director.

Launched in 2003, PIMEX pioneered large in-water displays with marina-side indoor exhibition space in a marine and luxury lifestyle show that has grown to become best-in-class in the region, with marine brands such as Sunseeker, Ferretti, Pershing, Princess, Nautor's Swan, Lagoon and many more, together with luxury brands such as Jaguar, Maserati, Land Rover, Lexus to name just a few, showcasing at PIMEX.

PIMEX 2014 will be held 9th to 12th January with 2,500 sqm indoor exhibition space, outdoor displays marina-side and in excess of 60 boats in-the-water, making it the largest show of its kind in Asia.

The Official Host Venue and home of the Phuket International Boat Show is Royal Phuket Marina, the only 5 Golden Anchor Award marina in Thailand, with berthing for 100 boats up to 35 metres in length, surrounded by luxurious villas and condominiums, all in contemporary Thai-Asian style. This is complemented by fine-dining, a patisserie, private members Health Club and shopping and fashion all situated along the boardwalk.

“We recognise the importance of PIMEX to the regional marine and lifestyle industry. It is firmly established as a key marine event in the global calendar, attracting interested buyers from all over the world each year. RPM and PIMEX have the same goals; to help promote Phuket and the marine industry and marine leisure lifestyle, and together we have helped make Phuket the undisputed cruising capital of Asia. We look forward to working closely with the organisers for the next five years and beyond.”

On display at PIMEX 2014 will be a stunning array of yachts and marine equipment, luxury cars and goods, and some of the finest properties on the Island, set against a backdrop of marina-side cocktail parties and VIP functions held over four days from 9th to 12th January 2014.