Phuket Island is at the centre of Asia's growing marine leisure industry – one of the top five cruising destinations in the world – and is the centre of the emerging 'Andaman Marine Triangle'. Consisting of Phuket, Phang Nga and Krabi provinces, the Andaman Marine Triangle is home to some of the most stunning sailing grounds in the world, and location of choice for the filming of many international blockbuster movies.

The coastline of the Andaman Marine Triangle, and associated marine leisure industry, is the single largest asset for the area's tourism industry, the promotion of which is lead by Asia's largest in-water boat show, the Phuket International Boat Show (PIMEX). Held 29th March to 1st April 2012, PIMEX is to be held at the award-winning Royal Phuket Marina on the Island's east coast.

Phuket is the gateway to the Andaman Marine Triangle with more than 200 direct international flights weekly from major tourist markets in Asia and Europe. The three provinces share the same coastline and marine environment, and together have become the marine playground for the rich and famous – the wealthy, the celebrities – and tourists from around the world.

With its long established and well developed infrastructure, Phuket holds a pivotal position in the Andaman Marine Triangle, and is home to four world-class marinas with a capacity of over 750 boats.

As reported by Channel News Asia: "The amount of private wealth in Asia is estimated to triple to US$16 trillion by 2015, according to Swiss private bank Julius Baer's annual wealth report done jointly with CLSA." It is this growth in regional wealth, combined with the desire of boat owners wanting to relocate from traditional cruising grounds, that continues to fuel the growth of the marine leisure industry in the region. 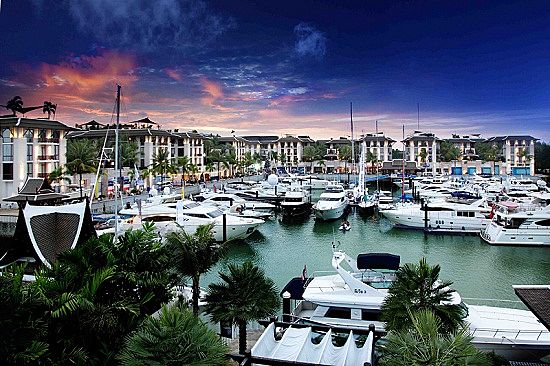 In line with this growth, large-scale marine infrastructure in Phuket continues to develop. Further investment by established Phuket marinas is expected to be over THB500m, and a likely expansion of berth capacity of over 20%, over the next five years.

PIMEX plays an integral role in creating and stimulating demand for marine products and services in Asia. The leading consumer show in Asia, over 5,500 visitors attended the 2011 Show to view the USD100 million of boats on display, and marine and lifestyle offerings.

PMEX connects buyers with sellers in the marine and luxury lifestyle space, and with the largest in-water display in the region, allows potential buyers to view boats first hand. International buyers often then choose to leave their boats in Phuket's marinas so they can enjoy the facilities and surrounding cruising grounds at their leisure.

The trend of marina growth can be seen expanding from Phuket to the Andaman Marine Triangle, with two new marinas in Krabi – Krabi Boat Lagoon and Krabi River View – and another – Port Takola Marina – in the pipeline, adding almost 400 berths to the triangle when complete.

Over one billion baht of marina infrastructure development is expected in the Andaman Marine Triangle over the next five years.

This bodes well for the continued growth of the region's marine industry, as marinas in the Asian region are filling up. PIMEX is positioned as a key marketing and promotional tool for Phuket and beyond, helping to position the Andaman Marine Triangle as the marine leisure playground in Asia.

PIMEX showcases Phuket Island, Thailand and the Asia region to the marine leisure world globally. Attracting an international clientelle, organisers confirm markets of growing importance for the show and for the regional marine industry in particular, are Russia and China, with Thai buyers also on the increase.

“We welcomed over 15 visitor nationalities to PIMEX 2011 and of particular interest was the growing numbers of Russians and Chinese. Also, a number of exhibitors noted a growing trend of Thais showing interest in buying into the marine leisure lifestyle,” commented PIMEX Show Director, Andy Dowden.

PIMEX 2012 exhibitor, Matthew Steinert of Prout International (China), added, "PIMEX is a key consumer-show boat show in Asia and we are looking forward to a successful 2012 Show.”

“We are seeing more interest in exhibitors from China, Australia and New Zealand in particular this year. PIMEX has become the boat show in Asia to showcase boats, marine and lifestyle products to a large international audience,” added Dowden.