The global marine transport company Peters & May has come up with a novel way to show its support for the charity Breast Cancer Clinical Trials (BCCT). The ‘Pink Lashings’ campaign uses its specially manufactured pink lashings to secure yachts during shipment with the aim of raising £25,000 for the charity. 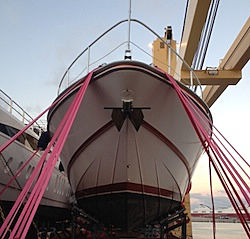 The initiative was launched this October as part of Breast Cancer Awareness Month. A donation of just £5 for each lashing strap by the owner will be matched by the company to give a total donation of £10 to the charity for each strap used. Whilst the number of straps required for each shipment is calculated by its weight and length, the average 80ft yacht would use 50 lashings and therefore raise £500 for the charity.

The first customer to support the Pink Lashings campaign is the owner of the 23 metre Leopard, who commented, “I’m thrilled to be supporting such a brilliant cause, and hope that many other boat owners will follow in my footsteps.” The yacht will arrive in the USA on 20th October in time for the Fort Lauderdale International Boat Show.