After leaving Auckland to a wonderful send-off from all the other yachts in the Viaduct Basin loudly sounding their horns, we headed north. The first 36 hours were wet and cold motoring into head seas, which the Dragon handled admirably. After that, apart from one windy night, it was light winds all the way to Bali, a trip which took just under 14 days – and we still had 6000 litres of fuel left. This was where we said goodbye to Alloy Yachts’ Vajira Samarasekara (Sam) and Chris Saville, who returned to Auckland. (It is standard practice for Alloy to send support staff on the maiden voyage. In this case ‘Sam’ – electrical – and Chris – engineering – made the trip.) 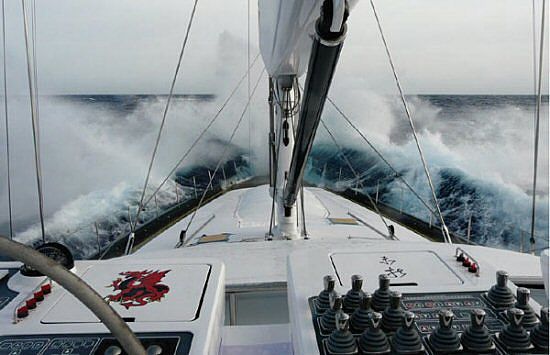 After leaving Bali, we headed to the Seychelles, but decided enroute that we could not go past the Chagos Archipelago without a quick stop at the atoll of Peros Banhos, which was amazing. It is an uninhabited atoll with many little islands which are patrolled by the British government.

After having our paperwork and permit checked by the authorities on the fishery protection vessel, we watched them head over the horizon – and then went for an amazing dive.

After Chagos it was on to the Seychelles where we did a photo shoot and an 11 day trip with the boss, which they thoroughly enjoyed. After quickly getting the Dragon ready for sea again, we took on board our security personnel and headed towards the Red Sea.

Whilst transiting through the Gulf of Aden, we had three people on watch at all times as during the previous few weeks the Somalian pirates had been very active. Whilst in a position of approxi-mately 13 degrees North and 53 degrees East, we saw a large dhow change course at eight miles from us and head towards us. At four miles, they stopped and launched six fast boats with about three people in each towards us. This certainly got the heart racing and adrenalin pumping.

On arrival, they were surprised to find eight people in flak jackets with guns awaiting their arrival and decided that they would do better to wait for an easier, less prepared target. Six hours later a merchant vessel came under fire in the same location and 24 hours after that three ships were also hijacked in the same area and are at the time of writing all off the Somalian coasts awaiting ransom negotiations.

We then had a brief stop in Rhodes before heading to Istanbul in Turkey for a trip with the boss. At present we are cruising the Greek islands with the boss on board and everywhere that we stop there are lots of admiring faces and questions.

Red Dragon
Red Dragon is a 52m flybridge sloop designed by Dubois Naval Architects and delivered in February. From September 24 - 27, Red Dragon will be on display as part of the Alloy Yachts presence at the Monaco Yacht Show.