With a sound five year plan in place, 2013 got off to a positive start for Finnish luxury yacht builder, Nautor's Swan. The company, led by Chairman Leonardo Ferragamo and Executive Vice President Roger Talermo, is well positoned to leverage recent restructuring and investments made for the future including the appointment of Kjell Vesto to the key role of Operations Director. 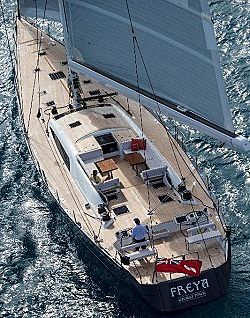 Sales in the first quarter of 2013 included a Swan 90S and Swan 80FD to North American clients, followed by last month's sale of a Swan 60 in Asia. The first Swan ever sold in China, this sale marks an important milestone for both Nautor's Swan and the new owner who is expected to both cruise and race his Swan 60 in Hainan.

Other sales in Asia include two Swan 53s to buyers in India and the Philippines. These recent successes are indicative of Nautor’s investment in the region and the growing demand for luxury yachts in Asia.

Luca Lucheschi, Commercial Director at Nautor’s Swan commented: “The owner of this new Swan 60 is a sailor who has achieved his dream of owning a Swan. Looking forward to the rest of the year, in Asia and specifically in China, we have a few promising negotiations ongoing. We are cautious, but optimistic about the Asian market’s interest in our new models, particularly the Swan 105 and Swan 114.”

2013 looks set to be an exciting and prosperous year for the company, with continued focus on the North American and Asian markets where the demand for beautifully designed and built yachts is clear.