Every October at Port Everglades, one of the most active cargo ports in the United States, Dockwise Yacht Transport (DYT) reminds the world that its semi-submersible ships are among the most extraordinary in the world, and the cargo they carry is as precious as any delivered around the globe by the thousands of ships that pass through there. This year, not one but two Dockwise ships, the 686-foot (209-meter) Yacht Express and the smaller 555.93-foot (169.49-meter) Super Servant 4, will follow in succession to the South Florida destination, having loaded in Genoa, Italy, and Palma de Mallorca, Spain, respectively. The cargo they carry—over 3,708.34 linear feet of luxury yachts—are worth a combined $358,475,000 USD and will either disembark at this Ft. Lauderdale stopover or carry on with DYT to other drop-off points in the U.S. and the Caribbean. 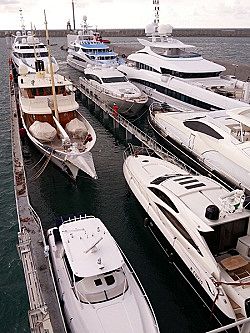 According to Graeme Lord from Fairport Yacht Support in Ft. Lauderdale, shipping his client’s prized possession, the 136-foot (41.45 meter) M/Y Lagniappe, safely across the Atlantic takes lots of expertise, starting with his own in knowing who to trust.

Lord has come to depend on DYT’s dedicated service to yacht transport in arranging bookings of anywhere from five to eight yachts a year for the last 15 years. That’s 50-100 yachts, he says, that he has either been involved with as a crew member or, more recently, as a “bookings and negotiations” coordinator for his own yacht support business.

“There are plenty of ships without fixed schedules or published ports of call, which will pick up any cargo, including yachts, but this leaves too much to the shipping company’s discretion as far as which route it takes and how long it takes to get there,” said Lord. “And there are ships that do stick to schedules but don’t have the personnel with the knowledge of DYT’s loading masters, engineers and crews.”

Most important to Lord is the way in which the yachts in his charge are loaded and off-loaded. DYT’s de-ballasting process allows sea water to flood each ship’s dock bay, giving it a marina-like appearance as yachts safely motor out the back and on to new adventures. The process is reversed for loading, with scuba divers securing the yachts with sea fasteners before the water leaves the “marina. “In all those shipments with DYT, I’ve never had anything even remotely that resembles any damage, but I’ve had problems in the past with other shipping companies where they show up to lift a yacht and they don’t have the right lifting gear. It’s a struggle; you don’t just go down to the hardware store and buy that lifting gear.” 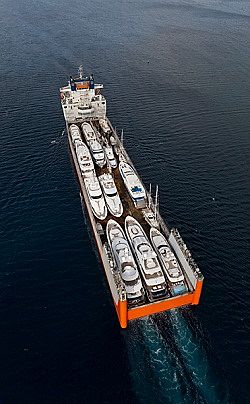 While the Yacht Express and Super Servant 4 are DYT’s own ships that have regular routes and utilize the float-on/float-off process that is unique to its fleet, the company can also oversee lift-on/lift-off services for yachts on other cargo ships if the need for meeting a schedule or delivering to a remote destination so demands it. Lord, who explained that M/Y Lagniappe is privately owned but charters in the Mediterranean, the U.S. and the Caribbean, said that in all cases, it simply makes sense to use a company that specializes only in the transport of yachts. “They understand the process right from the first phone call. Their loading master, their stevedores, all these behind-the-scenes people, they know what they are doing. We want to get the yacht from point A to point B at a reasonable cost, but as important, on a predetermined timeline. Especially with a charter yacht like M/Y Lagniappe, a delay or damage could result in us missing a charter.”

M/Y Lagniappe, which in Creole means “something extra,” lives up to its name by providing charter guests with the very best luxury, amenities and service, including accommodations for 10 in five exquisitely appointed staterooms with private baths. Among its many features is a sun deck with Jacuzzi and fixed sun beds. The yacht will arrive on the Super Servant 4 with 19 other yachts, of which eight are also over 100 feet. A total of 14 yachts will off-load at Port Everglades.

Captain Steve Hilton of Monaco also has been utilizing the services of DYT for 15 years, and his current command, the M/Y Bad Girl, at 186 feet (56.7 meters), will be the largest among 18 vessels aboard DYT’s Yacht Express, which trumps DYT’s other ships in the fleet not only in size but in its purpose-built extras such as accommodations for crews crossing with their yachts and amenities such as a pool and theater. “This is the fourth crossing for M/Y Bad Girl with DYT; it’s a commercial yacht for charter that could normally cross on its own bottom, but with the rising cost of fuel and maintenance on the engines, it makes more sense to ship with DYT,” said Captain Hilton. “They are the best professionals in the business, and they’ve done more volume.”

M/Y Bad Girl, which sleeps 12 and boasts an air-conditioned limousine tender and an array of toys including wave runners, kayaks and kite surfing gear, splits her time between the Med and the Caribbean, with stops in the Bahamas where Captain Hilton says her shallow draft allows her to explore areas traditionally suited to smaller boats.

After Yacht Express offloads M/Y Bad Girl and the other yachts, it will then add a few yachts before heading back to Genoa where it will become flush again with a full load. The ship will sail to Martinique, then back to Genoa and complete two more round trips to Port Everglades before undergoing routine maintenance and beginning again in spring to take yachts back to the Mediterranean for the busy charter and cruising season there.