Boasting an impressive interior volume, she will accommodate up to 26 guests over a spacious six deck design, including a deck completely dedicated to the owner complete with an almost floor-to-ceiling glass facade, aft deck lounge and the owner’s private lounge. She accommodates up to 34 crew in total.

The interior styling is centred around a luxurious laid back beach style featuring personal touches in the form of the owner’s choice of artwork. Custom furniture, rich materials, intricate patterns and complementary natural textures create a warm and open, welcoming ambiance throughout. 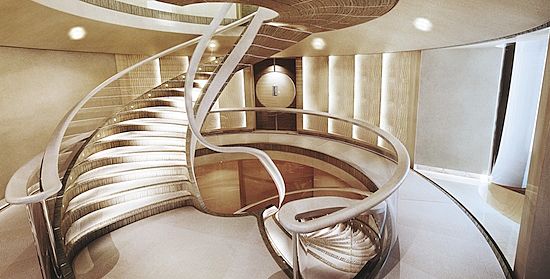 A notable feature of the interior design includes the curved ceiling-to-floor glass and paneling on the three top decks of the superstructure and the two other aft decks. This provides unobstructed views and easy access to outside areas. The feeling of spaciousness flows through into the main lounge, with an imposing height of almost three metres. Another particularly notable feature is the large nautilus shell inspired staircase which connects all decks except the sun deck.

The focus of Tomorrow’s outside areas is on social interaction, with an abundance of sunbeds, pools and Jacuzzi’s, with one of the focal points of the main deck being a striking circular pool with recessed seating. On the aft deck a swim platform connects to a large indoor beach club. 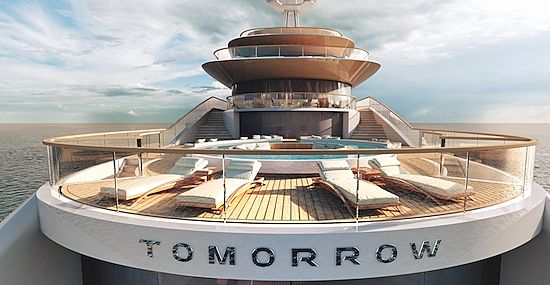