Princess Yachts International have completed the first hull of the new 40M, their largest vessel to date, which is believed to be the largest resin infused hull in the world. The company has been using resin infusion technology for hulls and major mouldings of several of its new vessels over the past few years, bringing major benefits to final weight, rigidity and performance. 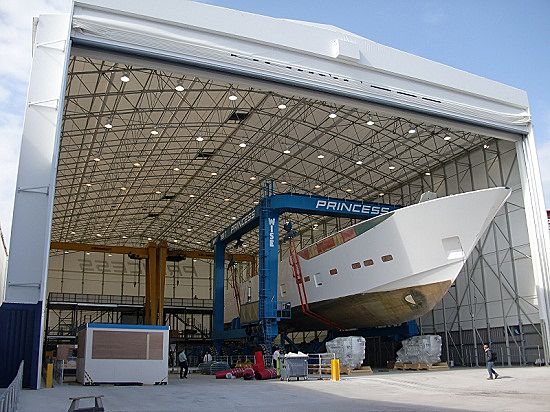 Moulding the hull in this way also has major benefits for the manufacturing process itself by cleaning up the operation and dramatically reducing emissions which supports the company’s environmental initiative. Princess Yachts were the first major European boat builder to be awarded ISO 14001 environmental award in 2010 and recently became the first manufacturer to gain the new RINA Green Plus (Y) notation for their entire range of craft below 90 feet.

The 40M, a 130-foot tri-deck yacht which can accommodate twelve guests in complete luxury with separate quarters for up to eight crew, is the second model from the new M Class range of yachts and follows the 32M which was launched at the London International Boat Show this year.

This new Princess flagship is now in full production within a purpose-built hangar at the company’s South Yard site where hull 3 and 4 of the Princess 32M are also in build. The first 40M yacht is due for completion early 2012 with delivery to her owner planned for early Spring.