In 2018, CRN announced it had signed a contract to build a new 62-metre custom superyacht. Less than a year later the client withdrew when he decided he wanted to build bigger. Re-inventing a one-off project designed around a specific owner is never straightforward and can put the shipyard in a tight spot, but construction has continued with barely a pause and CRN is expected to launch her later this year. 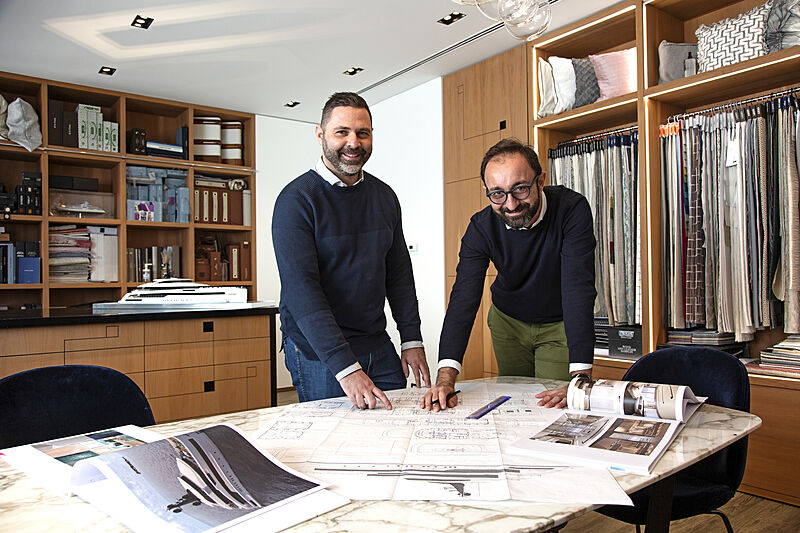 The original owner had commissioned Alessandro Pulina of Pulina Exclusive Interiors to develop a mostly white interior as a blank canvas or neutral backdrop for a colourful art collection. Those involved in the project likened the highly personal and pristine look to something out of Star Trek. 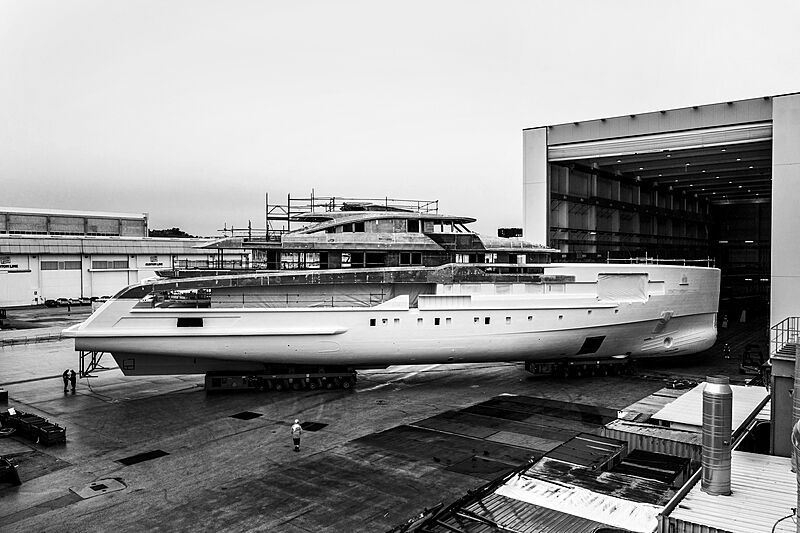 “The shipyard naturally wanted to retain as much as possible of the interior that had already been built but give it broader appeal,” says Pulina. “The challenge was to create something that would attract a wide range of potential buyers without being bland or mundane.” 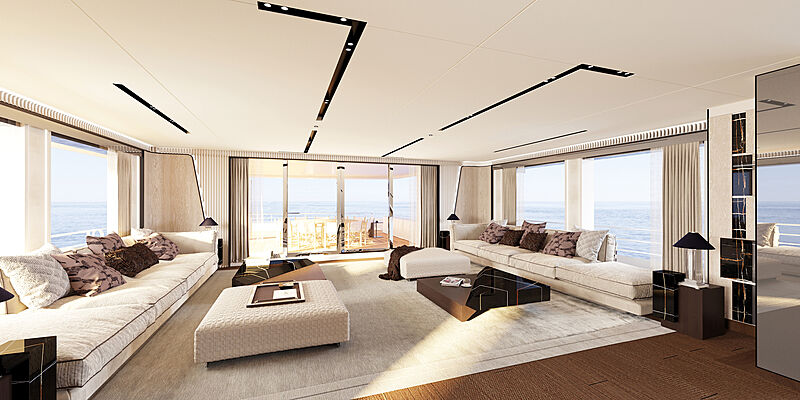 Photo: NoesisTogether with the shipyard, the designer has pulled off a dramatic transformation and created a chic yet comfortable living concept based on premium materials and natural tones. The principal woods are brushed white pine and pickled oak, which are combined with Crema d’Orcia, Sahara Noir and Calacatta Gold marbles. Bulkheads and facades are broken up by vertical pine slats with an elegant kink where they meet the ceiling and sole, which also serve to disguise the AC outlets. The warm and welcoming ambience could not be more different from the stark original concept. 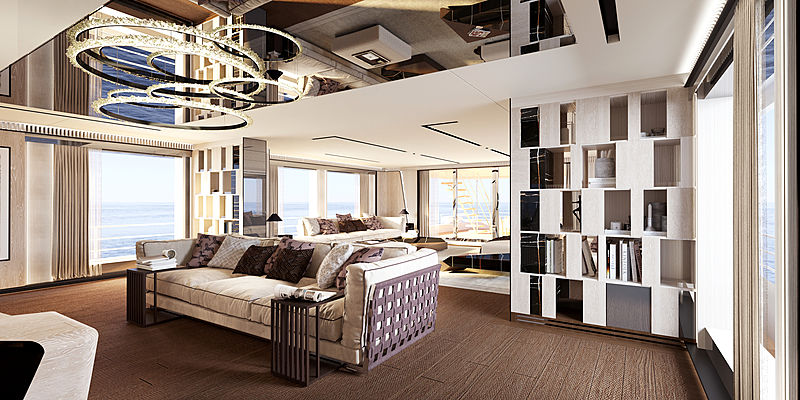 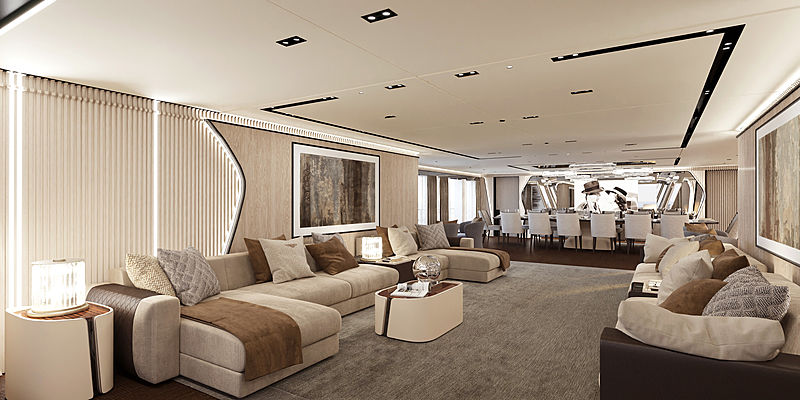 Photo: CRN Yachts“We’re interior specialists and I think that shows in the high degree of custom detailing and integration,” says Pulina. “When we selected the marble slabs, for example, we wanted high quality but also samples that had a pattern to their grain that would add richness to the décor.”The yacht’s crisp exterior styling with near-vertical bow by Frank Laupman of Omega Architects has remained unchanged. Signature features include the 170 square metres of glass windows, and especially the full-height glazing in the lounges on the main and upper decks. Full-height windows also provide panoramic views from the master stateroom on the owner’s deck over the private foredeck. 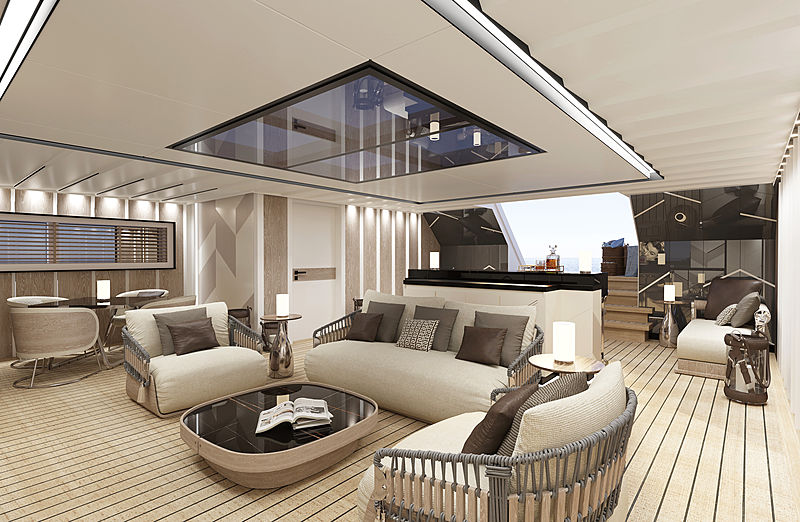 Photo: CRN Yachts“The foredeck is the owner’s open-air lounge and can feature a Japanese-style tatami table sunk into the deck like on Atlante, or a more conventional hot tub says Gabriele Piacenti, CRN’s Senior Project Architect. “Crucially, this private area is out of sight of the wheelhouse on the bridge deck above.”

Photo: CRN YachtsThe foredeck covers around 120 square metres and its size is difficult to appreciate until you stand in the bow and look back towards the master stateroom. Usefully, the crew can access both the mooring station and the side-loading garage (designed to take an 8.24-metre Riva Iseo, crew tender and various water toys) directly from their own quarters on the lower deck.

The owner’s bathroom has a spectacular layout and is accessed via a walk-in dressing room, with a glass-walled shower stall and a bathtub next to a window overlooking the sea and two decks below. When the sliding doors between the dressing and bathroom are open there is a direct line of sight from one side of the yacht to the other. 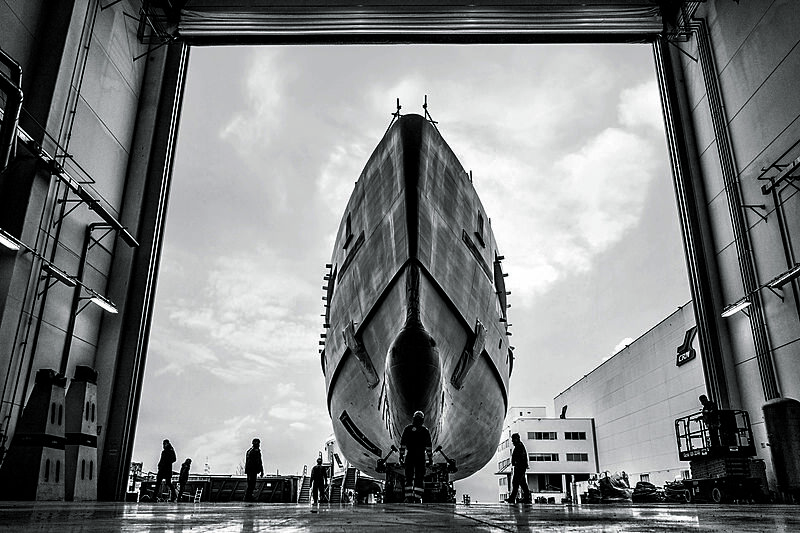 CRN 138 is equipped with CAT 3512C ACERT engines. “The original owner wanted an exceptionally quiet yacht,” says Marco Delpini, CRN’s project manager. “Extra noise and vibration damping throughout means noise levels in harbour will be a hushed 45 decibels in the owner’s suite and 50 decibels in the main salon!”

With charter in mind, the owner also requested six guest cabins on the lower deck in addition to a VIP suite on the main deck forward, which is effectively a second owner’s suite, and the master stateroom on the owner’s deck. 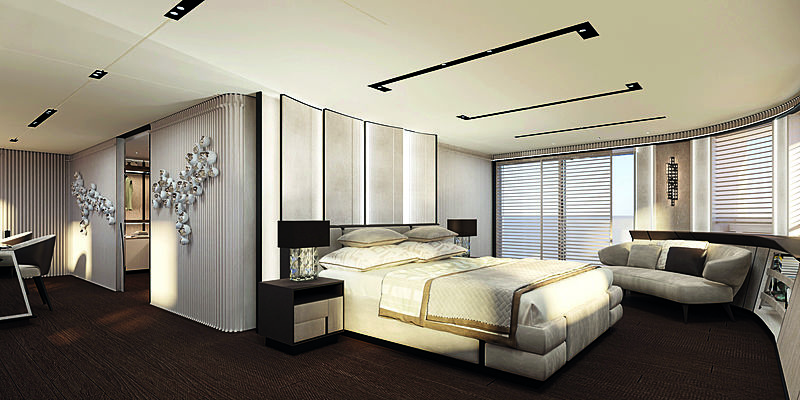 Photo: CRN YachtsThis would have totalled 16 guests not including the Pullman bunk in one of the twin single cabins, a high number even when staff and supernumeraries are taken into account. CRN chose to merge the two aftmost cabins to create a second VIP suite that takes advantage of the 10.80-metre maximum beam and includes a private lounge and walk-in wardrobe.

“The original owner wanted the transom beach club to be fitted out as a music room where an entire band could gather for jamming sessions,” says Delpini. “Not surprisingly, we decided to create a more conventional spa with hammam, emotional shower, massage room and gym. 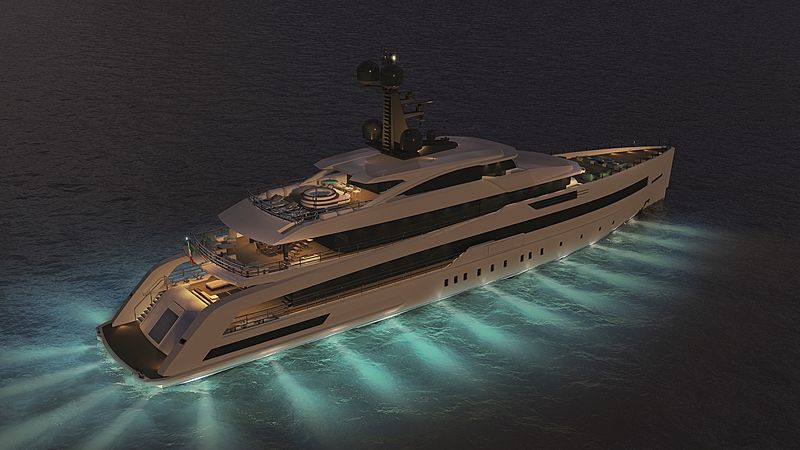 Photo: CRNCRN 138 is currently still for sale, but what is certain is that her new owner will be able to take delivery in double-quick time of a thoroughly modern, one-off superyacht designed and engineered for both private and commercial cruising.

CRN: Masters of the custom superyacht