2008 continues to be a busy year for Yachting Partners International and Chairman Alex Braden.

Hot on the heels of selling his company to the Barry Rogliano Salles Group (BRS) - one of the world’s leading shipbrokers with 2007 revenues of over €50m – the company now announces the signing of one of the largest new construction deals in its 36-year history. 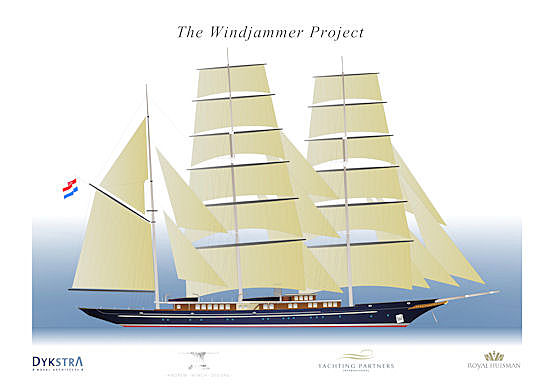 Royal Huisman are to build, for a repeat Yachting Partners client and under YPI Project Management, an 84m square-rigged, three-masted barque presently referred to as ‘The Windjammer Project’. Designed to reflect all the style and glory of similar-sized and rigged ships, the sort owned by Kings and Kaisers more than a century ago, the vessel will be packed with state of the art technology well hidden from view but very much present throughout.

The hull will be built from Alustar aluminium, the masts from aluminium to the height of the crosstrees, then carbon fibre. The yards, also carbon fibre, will feature ingenious in-yard furling for the square sails. This project will also push further the boundaries already pioneered by Royal Huisman in the areas of hybrid electric propulsion, energy generation, conservation and storage. The drive will be toward optimizing these technologies in view of a complete diesel electric system.

Further distinguishing features will be an invisible to-the-eye stern lower section that drops down to create a platform for swimming and watercraft management; gangway-platforms that can be operated either side just aft of amidships; and a funnel that will house a comprehensive array of satcoms.

Naval architecture and exterior lines is by Gerard Dykstra & Partners.

Interior Design and input on the exterior detailing will be carried out by Andrew Winch Designs with a brief to re-create old world charm and bespoke luxury inspired by the opulent era of early Trans- Atlantic ocean liners.

R&D and the construction process are expected to take six years, with completion scheduled for 2014.