The next Hydro Tec-designed yacht to be launched is Aifos, a 50-metre boat made entirely out of aluminium and currently under construction in the CBI Navi shipyard. It is expected to have an excellent performance even if it is not the most powerful of boats. 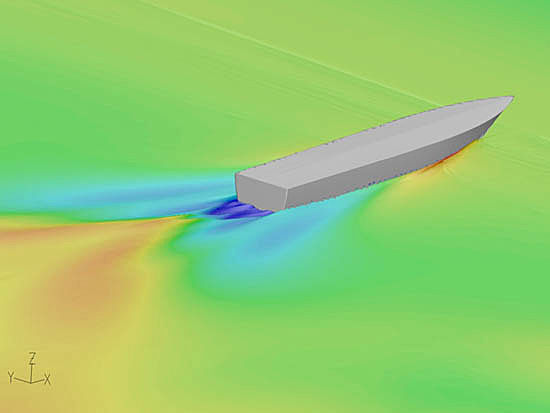 Aifos is a semi-displacement, three-deck 49.78m yacht, currently being built by CBI Navi according to a Sergio Cutolo’s Hydro Tec technical design. The exterior styling and design and the interior design are by Giorgio Vafiadis & Associates. She is classified by DNV and complies with MCA regulations. Its hull and structure are made of a light 5083-alluminium alloy, so the yacht's displacement is just over 300 tons – not much considering the yacht’s volume.

The semi-displacement planing hull and the propellers housed in semi-tunnels make Aifos boat very easy to steer, reduce draft and ensure stability in every condition, even at high speed. The keel of the Aifos ensures high speed, as well as an efficient fuel consumption/speed ratio, even at low speeds. The keel was tested in the Krylov sea basin in St. Petersburg and its vertical acceleration is limited. The engines installed on the boat are two MTU 16V 4000 M93 engines, generating 2,720 kW each, so the maximum speed achieved by Aifos will be above 24 knots. The boat will be able to sail for 700 miles at 22 knots and 1800 miles at 12 knots before needing to refuel. The boat has a dynamic stabilisation system and at anchor, made up of four stabilising, non-retractile fins with mechanical actuator.

There are 6 other yachts over 50 metres, designed by Hydro Tec, currently under construction:

Proteksan NB 53 and NB 54: the Turkish shipyard Proteksan is building these two 70m 18-knot displacement yachts made of steel and light alloy. The design is in charge of H2Yacht, while Hydro Tec has been entrusted with the planning of the structure, bottom, propulsion and plant engineering.

**** : a 60 m (197 ft) displacement yacht under construction at the Greek Lambda Shipyard, whose estimated launch will take place in 2010. Hydro Tec deals with the complete planning of all, the technical parts, while designer Dimitris Koutoukos has been entrusted with the design.

Columbus 177 and Columbus 187: these are the two first megayacht built at Naples based Palumbo shipyard. They are 54 and 57 metres, 17 knots, steel hull and aluminium yachts. Sergio Cutolo is working on these projects as project manager and Hydro Tec is providing the engineering and also the exterior styling.

Belena: A displacement-hull, 54m yacht made of steel and aluminium, currently under construction by the Greek Golden Yachts shipyard. It is scheduled for launching in 2010 and was designed by Giorgio Vafiadis. The engineering design, the shape of the hull, the structural design, facilities and propulsion are Hydro Tec’s.