Proteksan Turquoise's talented in-house designer Selahattin Üldas, has designed two interesting superyacht concepts, the Pro 620 Golden and Pro 750 Golden. When the design process of the Pro 750 Golden was finalised it was remarked that the design features and detail took on the feel of fine jewellery, hence the name 'golden'. 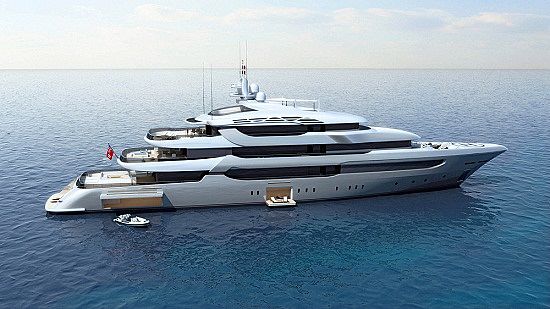 The highly experienced design team has proven it is possible to have massive interior volume without sacrificing the look and status of the overall yacht. The interior has large panoramic windows with rising deck-heads following the sweep of the exterior superstructure.

This model has six guest cabins and a further 150sq.m of living area for the owner’s accommodation. Also included are a cinema, gym, steam room, dining room and other saloons for general social and entertaining purposes. There is a helipad on the foredeck, sunbathing areas, pools and jacuzzis on various decks, all designed to complement the jewel-like detail of the whole yacht.

Following the design lead of her larger sister the Pro 620 Golden, this yacht presentation sits on the equally well tried 60 metre platform. The lines are very similar, but it has five decks as opposed to six on the 750.

The Pro 620 Golden is offered in two different general arrangements, both keeping the same panoramic ambience and volume as her larger sister. The main options are the configuration of the owner’s area. One could be positioned at the front part of the main deck; whilst the other arrangement could see this area situated at the aft of the upper deck. Both arrangements offer the owner a dedicated 120sq.m living area.

The layout allows for six guest cabins including two VIP cabins, giving a total of space for twelve guests. The features and detailing of this 62m design can be seen throughout. There is a beach club, gym, library, massage room, panoramic lounge, jacuzzis and plenty of entertaining, social and relaxation areas. A crew complement of fourteen completes this Golden package.