The Qatar International Boat Show (QIBS) 2013, being held at Lusail Marina in Lusail City from November 12th to 16th, is already surpassing expectations with bookings already being taken for the 2014 edition of the show, even before this year’s inaugural event has begun. 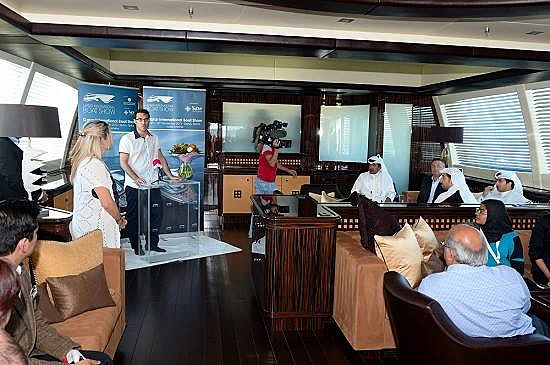 Three major international ship yards have already signed up for next year’s show with a number of other enquiries being taken. Of the 24 international exhibitors at this year’s show, the largest contingent is from Italy, with no fewer than nine major ship yards represented.

With just 48 hours to go before the start of QIBS 2013, exhibitors were still signing up for this year’s show, including prestigious brands such as the Porsche Centre, Doha – represented by Boraq Automobiles; and Al Wajba Motors – the dealer for Bentley, Lamborghini and McLaren. Both cited the fact that their target audiences were synonymous with the clientele for the Qatar International Boat Show.

To coincide with the first Qatar International Boat Show, plans are already under way to create Qatar’s very own Marine Association. Following a press conference announcement by H.E. Hassan Bin Jabor Al-Thani, President of the Qatar Marine Sports Federation, a round table meeting of maritime stakeholders is to be held during the Qatar International Boat Show at which the Qatar Marine Association will be created.

The timing is auspicious because one of the primary objectives of the QIBS is to establish a platform for the well being of the maritime industry. Such an Association will promote awareness of the local market, create opportunities by identifying needs and attracting the right calibre of specialists, and achieve international recognition for all that Qatar had to offer in this field.

Faysal Mikati, Vice President of Snow Conceptual Communications, which is organising the Qatar international Boat Show, says the international boating community are coming to experience ‘Brand Qatar’. “They have come to meet and explore this new market. The local market, on the other hand, has very high expectations of QIBS 2013. But for this to happen, the local market and people in the region need to show their support in equal measure".