The first edition of the Qatar International Boat Show (QIBS) has welcomed the Minister of Economy and Commerce, H.E. Sheikh Ahmed bin Jassim bin Mohamed al-Thani, to the event which has been held in Lusail Marina, Doha, over the past week from November 12th to 16th. 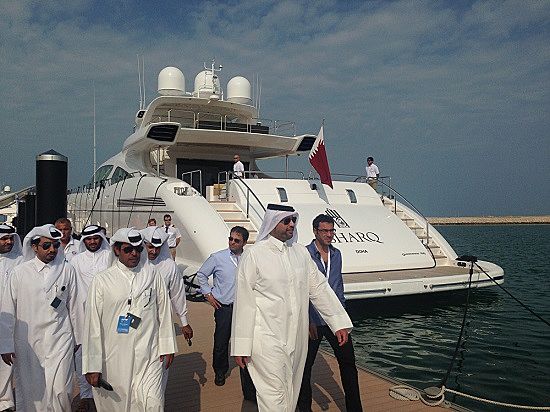 QIBS has been staged under the auspices of Qatar’s Ministry of Economy and Commerce. H.E. The Minister visited a number of stands at the Show and spoke to representatives of some of the Qatari ship yards which were exhibiting, as well as a number of foreign exhibitors from Italy, Germany and the UK.

He also inspected some of the many boats which have also been open to visitors to the show. Faysal Mikati, Vice President of Snow Comms, the firm that has been organising the event, accompanied H.E. The Minister on his tour and explained to him much of the background to the exhibits. “We were honoured to have His Excellency at the Show and look forward to his continued support over the coming year,” Mikati concluded.