Quantum Marine of Ft. Lauderdale, Florida are proud to announce the designing and implementing a new stabilization system for a specific application. The customer, ISA of Ancona, Italy, has been building its 120' high performance mega yachts for a number of years. ISA was seeking to take the next step in its product improvement program designed to deliver the ultimate in comfort to its customers for stabilization of these fine vessels when at anchor. The yacht was very successful, and ISA has now delivered 9 units of this class. 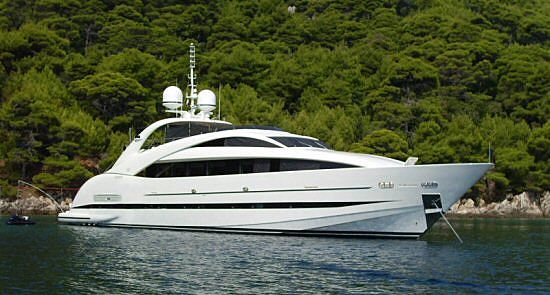 The challenge to Quantum was to develop a dual purpose stabilizer system that would minimize appendage drag but still deliver uncompromised performance for roll damping At anchor. Quantum's design team created the first small system using its patented and already proven XT™ (extendable) fin technology. The system was custom designed for ISA and its 120' class vessel, which has a top speed well in excess of 30 knots.

The systems were delivered in late spring 2008 and successfully commissioned and trialed in July. The performance delivered by this system was noted to have exceeded the expectations of both the builder and Quantum. On her first sea trials the vessel was able to obtain a top speed of 33 knots and showed that the specially designed fins met the builder's objective of reduced drag. It was also noted that there was no fin cavitations at the high end of the yacht's speed range and a positive impact was noted for the yacht's directional stability. The stabilizer performance in both the sailing and at anchor condition was reported as "very impressive", and the system performed flawlessly during each of the subsequent trials.

ISA, based in Ancona, Italy, is one of the premier Italian mega yacht builders and has earned an enviable reputation over the years for designing and delivering high quality, high performance motor yachts.