A new participant in the 6thth annual Les Voiles de Saint Barth has been announced. The owners of the super-maxi Comanche, Jim Clark and his wife Kristy Hinz-Clark are following one major goal with their boat: to cross the line first and to beat existing ocean records.

The comparison with a Formula 1 racing car may come from Comanche’s ability to approach 32 knots. Built at Hodgon Yachts in Maine and launched in October 2014, this 100’ black and red beauty with a sleek shape and a high mast, will definitely be one of the yachts to keep an eye on. With a design by VPLP and Verdier Yacht Design this boat is a precursor in superior technology. 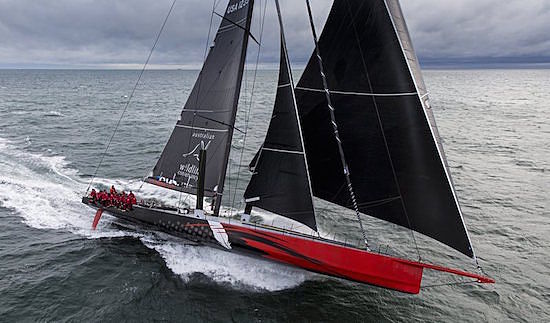 Jim Clark has hired a crew, including American skipper Ken Read, president of the North Sails, who has been the Yachtsman of the Year in 1985 and 1994 and a six-time world champion in J/24 class. He has participated three times in the America’s Cup and twice in the Volvo Ocean races. The international 23-member crew also involves navigator Stan Honey from the US and tactician Kevin Harrap from New Zealand and has huge chances of winning the races in Saint Barth.

Comanche’s first regatta was the Sydney-Hobart in December 2014. Short before crossing the finish line and after a neck-and-neck-race with Wild Oats XI, Comanche has lost this race. But this regatta was a first prove that this sailing yacht has huge potential in both medium and strong winds, with serious acceleration.

Before the 2015 Transatlantic Race in June and Les Voiles de Saint Barth in April ’15, Comanche will participate in the Sydney-Hobart again. In Saint Barth Comanche will race against the brand new Maxi Rambler 88, which was launched in December 14.