Last week more than two hundred people visited Karpaz Gate Marina (KGM), the new luxury marina in Northern Cyprus, ahead of its official launch later this summer. The marina owners, Karpaz Bay Resort Ltd, and the management company, Sea-Alliance Group, welcomed more than 60 yacht owners who were participating in the Eastern Mediterranean Yacht Rally (EMYR) as well as visitors including marina berth holders, VIPs, local dignitaries and representatives of local businesses. Those who attended were the first official visitors to the marina, which is located on the stunning Karpaz Peninsula, a region renowned for its natural beauty. 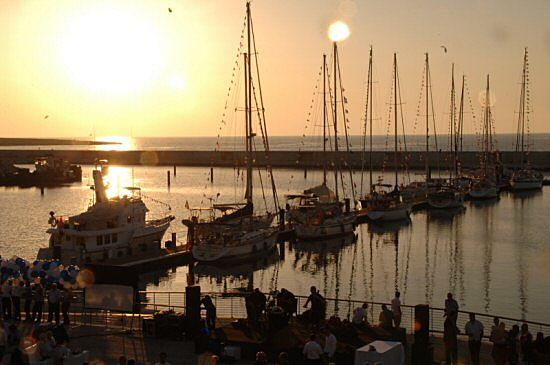 The fleet of participants in the EMYR, an annual rally which involves sailing enthusiasts travelling around the highlights of the eastern Mediterranean, enjoyed exclusive access to the marina’s facilities and were provided with designated berthing free of charge, and entertainment including a welcoming party. They saw first hand the quality of the marina, which has been in build since 2009.

Roy Klajman, Director of Sea-Alliance Group, the marina management company, said: “It was wonderful that Karpaz Gate Marina was a stop off point for the Eastern Mediterranean Yacht Rally this year. The owners and the management team have been working on this development for several years so to have our first official visitors is a fantastic and extremely pleasing achievement for all involved.”

He continued: “With the Eastern Mediterranean Yacht Rally stopping at Karpaz Gate Marina for the first time, we have had a great opportunity to showcase the result of the hard work and investment that has gone into making this the finest marina development in the eastern Mediterranean.”

Karpaz Gate Marina will officially open to the public in early June and the official launch ceremony will take place in a few months time.