The Farr 100 Rán Leopard, helmed by Niklas Zennström and with Adrian Stead on tactics, completed the Transatlantic Superyacht & Maxi Regatta in 7 days, 8 hours, 59 minutes and 12 seconds to claim line honours and smash the course record. Zennström and his 18-strong crew crossed the finish line off Virgin Gorda shortly after 10 p.m. UTC last night after covering 3,300 miles at an average speed of 18.6 knots. 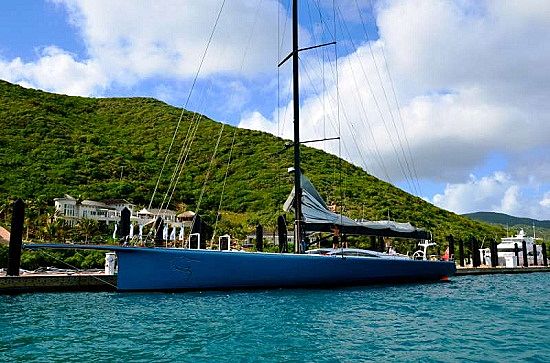 The new course record beats the previous one set by Hetairos in 2011 by 25 hours, 59 minutes and 18 seconds. The race is organized by the Yacht Club Costa Smeralda (YCCS) in collaboration with the International Maxi Association (IMA) and saw six maxi yachts and superyachts leave Tenerife on 26th November bound for the YCCS Clubhouse and Marina in Virgin Gorda's North Sound.

With a curriculum that includes wins in the Rolex Fastnet Race, Copa del Rey and Mini Maxi Rolex World Championship, Zennström approached his first transatlantic regatta with the enthusiasm and concentration that has made Rán one of the top names in international racing. Chartering the 30.5-metre supermaxi Leopard was certainly a smart first step and the crew regularly reported boat speeds of 20 knots and above.

"It was an amazing crossing!" said a delighted Zennström on his arrival at YCCS Virgin Gorda. "The crew did an excellent job and the boat achieved the result we were aiming for. During the crossing we faced a maximum wind of 35 knots and the boat's maximum speed was 32-33 knots. Thankfully we had no major failures onboard, just the usual minor breakages for a comfortable racing boat. We are very happy to have established a new record for this transatlantic regatta and we are very happy to be here in the new YCCS Clubhouse."

The 32-metre Baltic Yachts sloop Nilaya was in second place at approximately 395 miles from the finish at 9 a.m. UTC. Peter Harrison's Farr 115 Sojana, a veteran competitor in all five editions of the Transatlantic Superyacht & Maxi Regatta, followed approximately 100 miles behind in third place with Oscar Konyukhov's Med Spirit, the 27.7-metre sloop representing the Russian Yachting Federation, in fourth. Following a more southerly course are fifth-placed Cape Arrow, a 2011-launched Southern Wind 100, and the majestic Shenandoah of Sark, the 1902-launched 55-metre triple masted schooner owned by Francesco, Carlo and Andrea Micheli.