94 days and counting: It’s 14 weeks until the start of the fully-crewed non-stop 1760nm Sevenstar Round Britain and Ireland Race - organised by the Royal Ocean Racing Club (RORC) and 22 yachts have confirmed their participation with a number focused on the opportunity of breaking both the fully-crewed race record set by Jonny Malbon on Artemis in the 2006 race (7 days 4 hours, 29mins) and the course record set by Dee Caffari and Sam Davies on Aviva in 2009 (6 days 11 hours and 30mins). 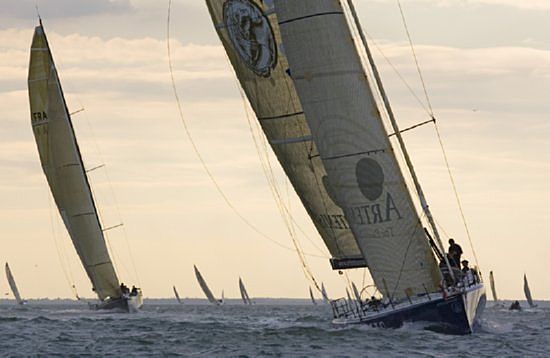 Leading the charge is Mike Slade’s 100’ super maxi ICAP Leopard: “There is no doubt that this race is one of the toughest on our sailing calendar,” said Mike Slade as he waited for a weather window to launch an assault on the west to east monohull Transatlantic sailing record. “August can throw up all sorts of weather and if a high pressure system descends upon the UK, all bets are off for a record breaking run, even though the 100’ Leopard is potentially much faster than the IMOCA 60 in which Jonny Malbon and Dee and Sam set their records.”

Pushing Leopard hard will be a number of Volvo Open 70’s: From Spain, Telefonica Blue, a competitor in the 2008/09 Volvo Ocean Race will be skippered by Olympic Gold and Silver medallist Iker Martinez: "We are really happy to be taking part in the Sevenstar Round Britain and Ireland Race, a challenge with a history that spans over 30 years and to be competing with Telefónica Blue. There's no doubt that it is going to be wonderful to race with boats from other classes, sailing a new course for our boat and for most of the crew. To sum up, it's a great honour for us to join in this great celebration of British and Irish sailing."

From France the Groupama syndicate, skippered by French multihull sailing legend, Franck Cammas will also race. The French are serious about winning the Volvo Ocean Race and see the Sevenstar Round Britain and Ireland Race as a perfect opportunity to get more experience with the boat: “Franck is one of the best multihull sailors in the world having won the ORMA 60 World Championships six times,” said Damian Foxhall, Groupama’s Sport and Sailing Manager from the base in Lorient. “Franck is keen to transfer his multihull experience to the Volvo 70 in this demanding race which will be a good test for all the team over the 1760 mile race course.”

Sponsored by Sevenstar, the Dutch specialist yacht and motorboat shipping company, the race, which has attracted teams from America, Austria, Holland, Slovenia, Spain and Sweden, takes the yachts around some of the busiest and most tactically challenging sailing waters in the world. It attracts a diverse range of yachts and crew most of which are enticed by the challenge it offers as well as the diversity and beauty of the route around Britain and Ireland with spectacular scenery and wildlife.

Racing with Sailing Logic’s Playing Around Logic, 61-year old Doctor of Psychology Jon Barnes competed in the 2006 race: “This is long distance racing but always with tide and land to think about. You’ll be entranced by sea birds and mammals, see ancient settlements on remote islands and perform an untold number of sail changes in all conditions. Experience the unforgettable sight of oil and gas fields at night. Finally Dover, and you've nearly done it. Then the finish and the best shower ever. The amazing memories and sense of camaraderie will endure…and, if you’re lucky, you'll get to sail with wind aft of the beam.”

The Sevenstar Round Britain and Ireland Race has been adopted by the Class 40 Class Association as one of its premier events for the 2010 season. Andreas Hanakamp’s Celox 40 and Tom Hayhoe, RORC Vice Commodore skippering Orca are two Class 40s on the entry list so far. Tom Hayhoe, a competitor in the last race comments: “The Sevenstar is without doubt the most challenging race in UK waters - and the only one that goes round non-stop. Bob (Clitherow), Chris (Beeson) and I did the race four years ago and it was particularly tough as we were hard on the wind almost all the way. It’s a challenge we can’t resist and there is something very special about the northern approaches – cold, grey, with big Atlantic rollers, and great wild life.”

Crew training and boat preparation are key to taking home the silverware in any race, but this course also calls for exemplary navigational and tactical skills over a period of up to 12 days: Chris Radford and his multi-national crew have chartered the Corby 45, Relentless on Incisor: "The Sevenstar Round Britain and Ireland Race provides us with a focal point for this year and will force us to learn how to sail Incisor and develop our skills further. Sailing round Muckle Flugga will be quite a moment and a huge achievement. For us, this is all part of stepping up from Class 2 to Class Zero and moving forward following our Rolex Fastnet 2009 campaign on Bongani. We are an all-amateur team who have got together, chartered the boat and we share the costs. We have much more limited budgets than some of our competitors, but intend to give this the best we can.”

Yachts competing in the 35,000nm Clipper 09-10 Round the World Yacht Race have just arrived in Jamaica at the end of the latest leg of the 10-month series. When the fleet returns to the UK, two boats will be competing in the Sevenstar Round Britain and Ireland Race. The Chairman of Clipper Ventures, Sir Robin Knox-Johnston said, " From personal experience, the opportunity to race round the British Isles with their challenging wind and tidal systems and navigational hazards, must be one of the most desirable entries to have in any ocean racer's log book. Clipper Events are pleased to be making the Clipper 68ft ocean racing yachts available to compete in the RORC Sevenstar Round Britain and Ireland Race and I am happy to confirm the entry of two strong teams."

Follow the race: The Sevenstar Round Britain and Ireland Race can be followed via the event website: http://sevenstar.rorc.org and all yachts will be fitted with a tracking device to follow the progress of the fleet. ‘Armchair’ sailors around the world will also have the chance to test their skills by taking part in a ‘Virtual Sevenstar Round Britain and Ireland Race’ which will mirror the 1760nm race. The virtual game is free to play and is designed to be as close as possible to the real thing.

The fully crewed non-stop race covers 1760 miles and is open to IRC, IMOCA 60s, Class 40s and multihulls who will race clockwise around Britain and Ireland, starting from the Royal Yacht Squadron line in Cowes on the Isle of Wight on Monday 23rd August 2010.