Redman Whiteley Dixon (RWD) – one of the top English superyacht design teams – reveals the exciting profile and interior sketches of Amnesia IV. Midway through construction, the 65-metre is scheduled to launch late 2010 and has certainly extended the boundaries of her Italian builders.

Toby Ecuyer, RWD’s Creative Director, says “The design brief was – in brief – precisely the same as for Amnesia III: ‘to design a modern, practical, clean charter yacht which maintains the spirit of the previous Amnesia, but also to push the exterior envelope, including the hull profile’. The near plumb bow is – we believe – a first for Benetti”. 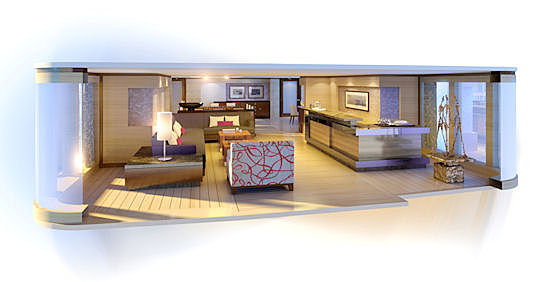 “The boat is full of interesting spaces and textures: for me one of the treats is the main saloon with floor to ceiling windows, much more architectural than many boats of this size,” adds Ecuyer. “It was fascinating to tap into the wealth of charter knowledge from the owner’s previous Amnesia’s, that have a phenomenal record of success while – once again – the owner’s background in textiles and manufacturing played a part in terms of philosophy and practicality.”

When RWD and their client presented the favoured design with a plumb bow, together with one with a more traditional bow, asking Benetti’s Vincenzo Poerio which he thought they should opt for, the reply was that he would like to build the one with the traditional bow, then adding, with a smile: “…but you should build this with the plumb bow!” Benetti took up the challenge with aplomb. 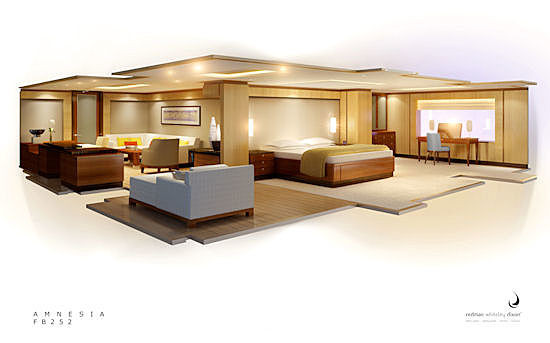 RWD, established in 1993, has some nine large (55-metre+) and very large projects in build at present, launching from late 2009 to 2014, most of which are subject to confidentiality clauses.