Burgess Marine are busier than ever ahead of the superyacht show season, with four major projects currently underway at the shipyard including two in the UK and two in the Mediterranean. 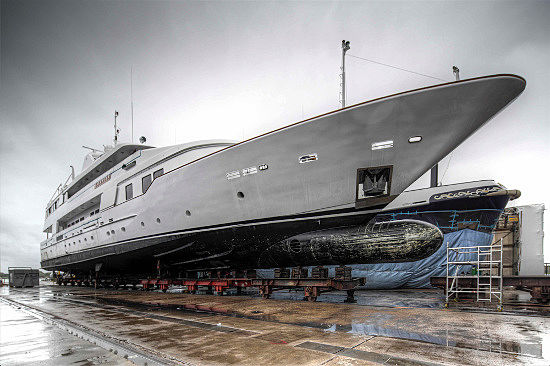 In Porchester, the refit of the 25 metre Coy Koi has encompassed annual Class works, blasting and painting. Work continues on the refit of the 57 metre vessel Tacanuya, the 1992 Swiftship. Her refit will encompass structural, mechanical and electrical works, as well as paint works and a major interior overhaul by Trimline Superyacht Interiors and Atlantic Contract Interiors.

In addition, the shipyard have announced they are undertaking a major structural repair project in Toulon, at ISM, on behalf of the Ocean Independence yacht management team. The vessel is undergoing a major series of aluminium repairs; the contracted works consists of repairs to the fuel and fresh water tanks, bulkheads and garages doors.

In partnership with Ocean Independence, Laurent Giles and Rolls Royce, will also formally launch Project Nelson on the 24th September, during this years Monaco Yacht Show.