The 90 metre, 1,200 tonnes superyacht Athena arrived at Orams Marine Services Auckland during February 2011 for a comprehensive Refit programe carried out over a nine month period. The massive rig carries 2,500 sq m (28,600 sq ft) of sail and when launched Athena was the world’s largest private sailing yacht. 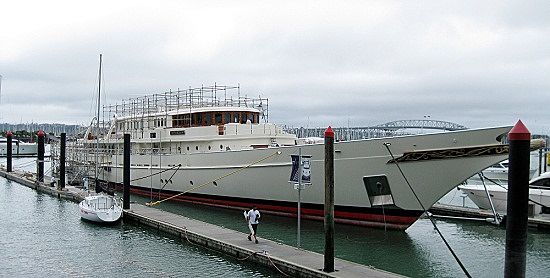 Craig Park Managing Director of Orams Marine Services said it had been an inspiration to be involved with such an outstanding vessel and the company was proud to have worked on two previous superyachts for the same owner. 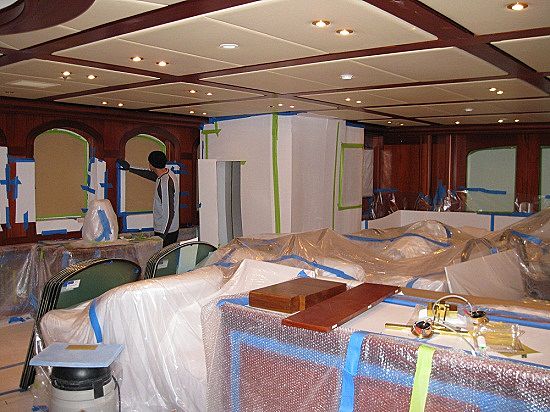 Being the largest superyacht to carry out a refit in New Zealand it was first necessary to upgrade the whole marina. The wooden piles were replaced with sand-filled steel piles, new pontoons built and 10 tonne bollards fitted. Due to the vessel's size much of the work was completed ‘in the water’ which required building a massive under cover shrink wrapped structure which created a working environment very similar to a land-based facility. 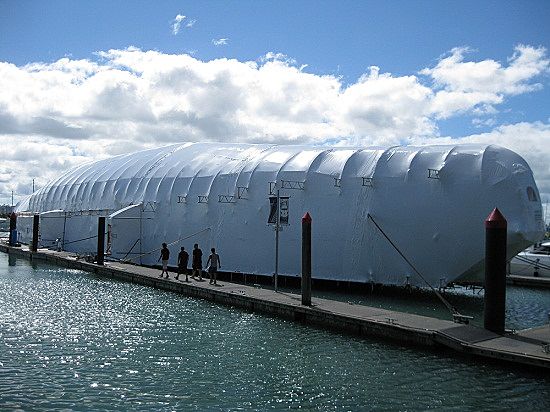 A major element of the Refit was a complete repaint of the hull and superstructure and it was critical to ensure paintwork was efficiently prepared and finished under optimum conditions. This also applied to the extensive varnish work undertaken throughout the vessel and Park was pleased to say that the ideal working environment was achieved and also there was no indicative smell or fumes noticeable outside the tent. 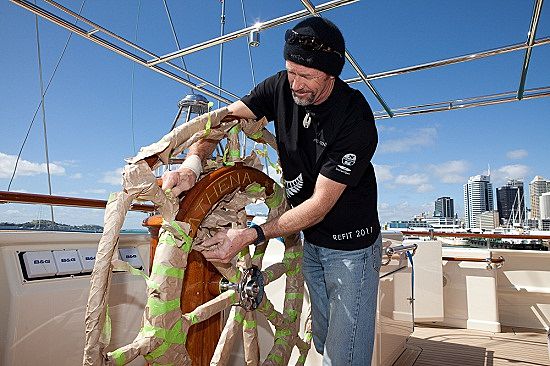 Environmental requirements were met for air and water quality and the whole structure was sealed above the water to capture any falling waste material. For additional security the yacht was surrounded by floating booms. 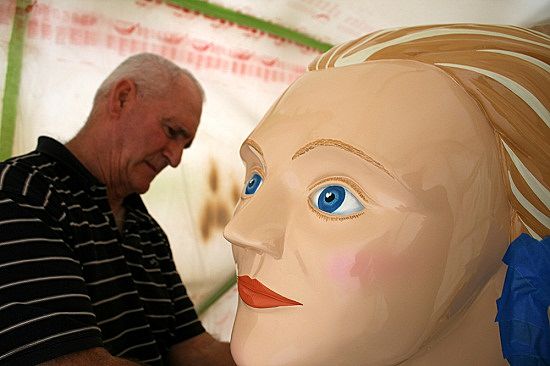 There were also always happenings emphasising the sheer volume of the vessel for example the way it devoured materials like rolls of masking tape was amazing. Additionally the vessel was pulling 250amps and many workers using air-powered tools drawing a further 250amps and as Park commented “they drank air like you wouldn’t believe.” Likewise there were often up to 60 workers on board Athena at any one time and keeping close track and management of the work flow was a logistical challenge especially considering there was a similar number of personnel involved working ashore. The project management XL worksheet was spread over 25 pages each with an accompanying series of subcategories. Basically every fixture, fitting and other equipment throughout the craft was checked, serviced, repaired or replaced either on board or taken ashore to complete the job. The work on engines and generators included fitting new environmentally friendly ‘Diesel Particulate Filters’ resulting in no soot, reduced emissions, and reduced sound levels. 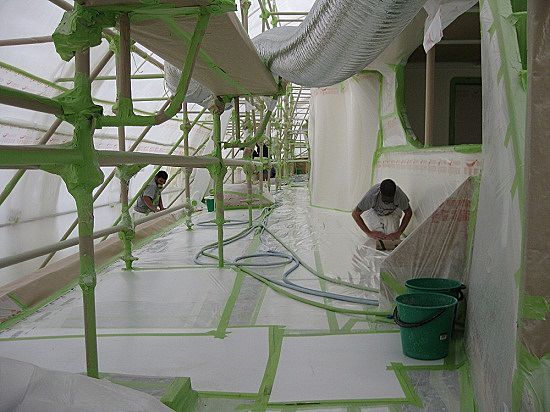 The exterior and topside painting of the entire vessel involved an area approaching 2000 m². Together with this was the extensive interior and exterior varnish work which was extremely difficult when stripping sun damaged varnish areas & precisely matching them with the existing surrounds. Labour alone over the project period totaled in excess of 80,000 man hours. 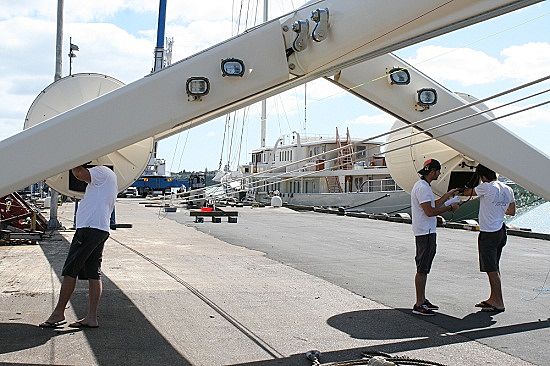 The masts and rigging were removed for a comprehensive service including running rigging, fixtures, composite components and all equipment replaced as required plus a full overhaul of the hydraulic furling motors. The painting of the three 61m (200ft) Masts alone was described as being similar to painting three 20m yachts. The removal and later replacement of the masts and rigging was another massive logistical exercise involving four cranes and a rigging crew of 20 personal working over a four day period. 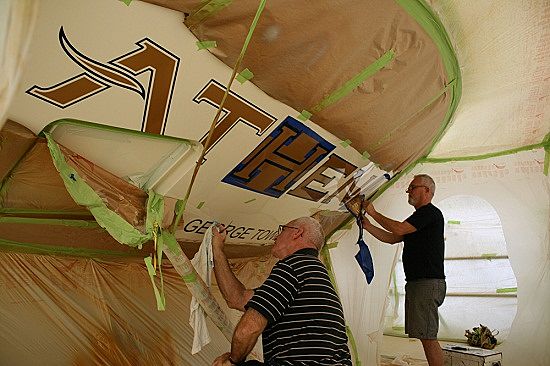 All sails were removed to the loft for the extensive involvement with checking and servicing the 28,000 ft.² of sail area. At the conclusion of the Refit the sails were returned to be fitted on the vessel. This was another huge job - for example fitting the three in-mast topsails alone required almost two days utilising separate teams, one aloft in bosun chairs and another deck crew operating halyards and winches. Further work involved the service and maintenance of the yachts 55 captive and drum winches. Completing the Refit the vessel was dry docked with the two shafts and propellers removed for service plus a full antifoul. 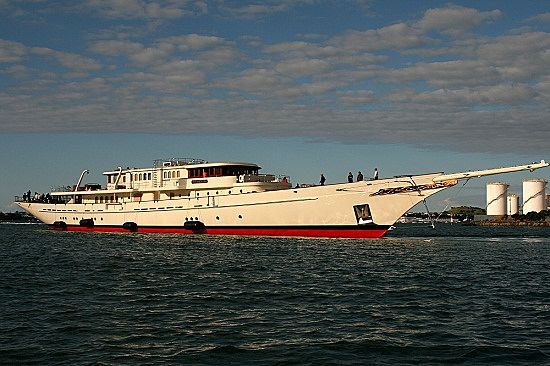 Park commented, “Refit's are always challenging and this one also presented an element of drama, firstly during May Auckland experienced a tornado and at other times exceedingly strong winds which severely tested the integrity of our tented structure - which pleasingly withstood every occasion. Further drama was near one midnight hour when the shore power tripped and the vessels emergency genset was powered up with the resultant fumes setting off the fire alarm. Fortunately our security monitoring system quickly identified the problem and no damage was done or time lost.” 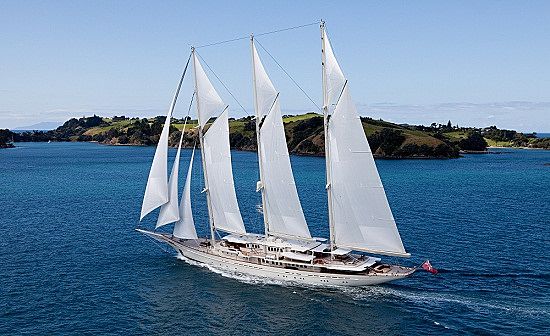