“Wow… is that… was that… really the Galapagos?” is a question yacht spotters throughout the Philippines are continually asking. The answer is yes it was the Galapagos, but that was previous to her change of ownership, re-christening as Ark Angel, and a major multi-discipline makeover which, just a passing glance at her before-and-after profile will attest, very few areas have been left untouched.

In the early months of 2009, the 55-metre Galapagos set sail from Gibraltar to the Philippines for a comprehensive cosmetic, functional and engineering transformation executed by the commercial to luxury yacht conversion specialists at HYS Yachts, Philippines (www.hys-yachts.com). 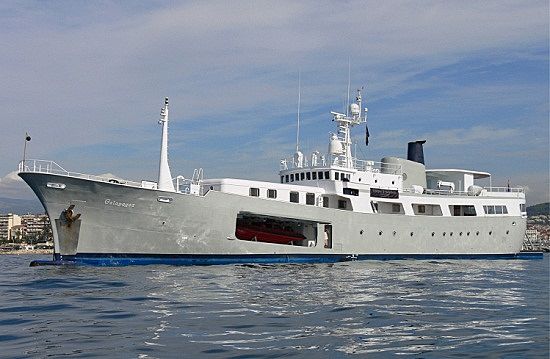 HYS Yachts, while not (currently) a household word in the luxury yachting community, is the preeminent leader in commercial to luxury conversions with – at this writing – 10 successful conversion projects in its portfolio.

In September 2009, HYS Yachts began Ark Angel’s transformation from a rough-and-ready looking world explorer into a modern, sleek, long-range luxury cruiser with all the esthetics, functionality and amenities any top market yacht owner would expect.

New exterior works include a fully re-styled body kit complete with a contemporary stern unit, re-designed side combings, a fully faired hull and superstructure, and a stately white on deep green motif. 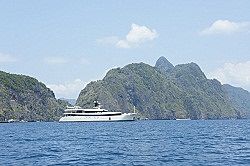 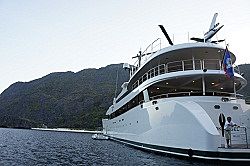 Functional upgrades have included a roomy, sparkling sun deck complete with a naturally heated salt water Jacuzzi, two helicopter decks (one sized for the owner’s Agusta 109; the other rated for R44 touch-and-go guest services), a totally revised bridge layout with all the latest navigation and communications instrumentation, an expansive aft-deck alfresco dining and entertainment area, a new gourmet food services galley, and a truly luxurious full beam owners cabin. All existing VIP and guest cabins have also been thoroughly redecorated and a new VIP cabin with en-suite bathroom was constructed from the spaces previously used by the ship’s office and gymnasium.

Major engineering improvements include a uniquely styled nav/com mast which gracefully arcs over the forward section of the sun deck, a custom manufactured wet exhaust system, and a new noise and vibration dampening prop.

While current plans expect the Ark Angel to remain strictly private use, her new owner is also exploring the possibility of future charter arrangements throughout the entire Asian region.