Home > News > Repainting the 60m MY Sea Pearl in Thailand

Built by the Dutch shipyard Oceanco in 2004, the 60 metre superyacht Sea Pearl has recently undergone a total re-fair and paint of her hull and superstructure, interior and engine room - a complex and intricate job completed to the highest of standards, and not at one of the many European locations you would expect. 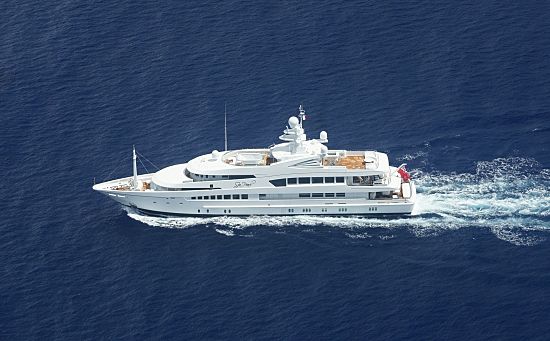 After spending some time cruising in the increasingly popular region of SE Asia the team of Sea Pearl decided to work with TH Marine Services in Bangkok. Let’s get some background information and talk to the people integral to the successful completion of the project, including the owner of TH Marine Services, Scott Christopher Taylor, owner of Yachting Services Thailand, Mick Cotter, who regularly collaborate with Scott and his team in Bangkok, as well as the captain of Sea Pearl, Roy Cooper. Working together in Bangkok Dry-dock, TH Marine Services (THMS) and Yachting Services Thailand (YST) have been collaborating on refits and repaint work for the five years. 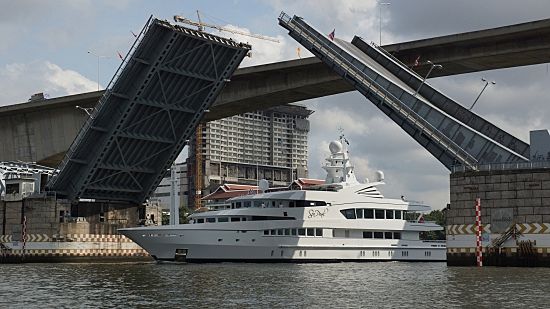 Scott Taylor, who started working on superyacht paint projects since 1986, says, “There’s are a lot of enquiries now as there’s a lot more boats coming to Asia as an alternative to Europe. There’s also an increasing number of Asian owners looking for refit work, so why go back to Europe when we have the facilities and the skills here? It can be difficult in Asia, yes, to find the required skills but we’ve trained our staff and it works well.” 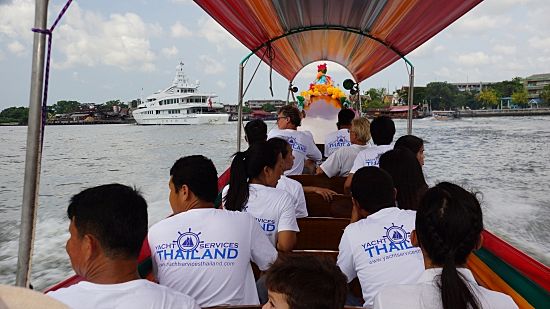 When asked how the two companies work together today, Mick Cotter says, “We provide all encompassing services for any superyacht. We do an initial overall survey and remove the parts for repair and service. Scott does all the fairing and painting. On completion, working to a strict project plan, we reassemble the parts often working with the yacht’s crew. This is a perfect area of the world for this type of work. The staff are skilled, focused and meticulous with their hands, so it’s a good location. Also there are an increasing number of yachts on global cruises and they stop off here, as Bangkok is an international hub with good hotels and has a major airport in SE Asia. Many come here and like it so much they get sort of stuck here for a little while, so it’s a good place to do a refit.”

“The government in Thailand is now starting to promote Bangkok as the hub of Asia and superyachting, so they’re beginning to relax some of the laws and restrictions on foreign registered boats, which makes everything easier. Many of us have worked throughout Asia in Hong Kong, Singapore, Korea, Malaysia and Indonesia, and there is no better area for superyacht building, refits and repair than Bangkok. The other ports in Asia have little or no access to the skilled tradesmen that we have here and the good supply of materials and equipment. They’re not geared up to superyacht work as Thailand has over fifty years’ experience in yachts building. Our goal, and we are well on the way, is to have the best and biggest superyacht refitting operation in South East Asia.”

The prime reason Sea Pearl worked with THMS in Thailand was simply because they were cruising in the area, but as the captain of the superyacht Roy Cooper told SYT, he has been more than pleasantly surprised with the work that the team has carried out. Describing the relationship between the Sea Pearl crew and the two local yacht companies, Cooper says, “It’s a good and very easy working relationship. Scott understands what we want and he’s got the skills, the experience and the staff to deliver it.”

Like many complex projects undertaken on board superyachts, despite a good working relationship with subcontractors, with a skilled and experienced team completing the job, the repaint project was not without some challenges. For Captain Roy Cooper, these challenges were predominantly presented in the climatic conditions of the country in which they were working - though notes that these challenges were easily overcome by the TH Marine team. He says; “Temperature, humidity and the atmosphere were as always the main challenges we faced. I’m talking about atmospheric pollution - just try it when you’re working with chemical paint. In order to achieve the prefect paint finish that is demanded by owners around the world, the working conditions need to be right. Any dust and dirt must be removed, the temperature and particularly the humidity must be controlled and monitored to workable levels. But you can see the final result here, and it really speaks for itself.”

Independent Paint inspectors CCS who were employed by Captain Roy Cooper to advise on the complete project initially viewed the working and climatic conditions in Thailand as a potential threat to the high quality level required. Scott explains, “They were really worried about us reaching the clients expectations with the environment that we’re in, but we’ve proven it can be done and we have achieved what was required. With more than thirty years in super yacht painting behind me I have always known what the end result must be and the way to get it." CCS quoted in their final paint report that: “Despite these challenges the results achieved in the topcoat are excellent. This is also backed up by the Gloss and DOI values measured and recorded which are at the high end of the scale set by international standards”

As Scott and Mick both say, “As with all superyacht work none of this can be achieved without dedicated project management. The project manager will plan, organise, monitor and weave together all the complex strands needed to remove and refit parts and keep paint records of all products applied to the yacht. It means long hours and constant focus to keep the project on track, on time and in budget”.

Materials, tools and labour need to be ready on site just in time and the working condition constantly monitor and recorded. “My staff meticulously report and record everything, they photograph ever detail from taking out and polishing the smallest screw, to the much bigger jobs like repairing a deck or building a complete new cabin." As Mick says, this adds to the overall accuracy of the project and is “an invaluable resource.” “We can see what it looks like, where it fits, and zoom in to check every detail. It’s just so much easier when we put it all back together.”

Captain Roy Cooper notes that a complete new re-paint in Thailand may not be every superyacht owner’s or captains first port of call due to the distance from Europe and the fact that Bangkok - at least for the moment - does not attract a vast amount of boats cruising in the area. Having said that superyachts have been cruising here, built here and coming here for refit and repaints for more than thirty years so the skill and quality is available. Despite the ever changing modern world Thailand and Bangkok is considered ‘exotic’ and can be a very enjoyable location to build or refit a yacht. Captain Cooper’s satisfaction with the work that TH Marine has successfully completed is an undeniable draw. “Everybody wants and demands ‘a perfect paint job’, but you don’t always achieve it. The work that has been completed on Sea Pearl here in Thailand is right up there with some of the best. I’m very happy with it and there’s no reason we wouldn’t return here as a first stop.”