Rivergate Marina located in Queensland, Australia, has announced that they are currently in the process of planning the third annual survey for a 47 metre ISA built motor yacht. Travelling from South East Asia to Australia, the vessel is due to arrive at the marina in September this year and stay for a planned period of six weeks. 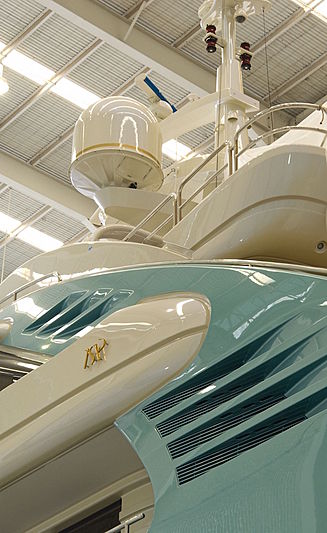 The Marina reports that the vessel will be lifted in the 600 tonne yard facility, neighbouring Rivergate’s own 300 tonne hardstand. Whilst a final list of works is yet to be confirmed, preliminary plans include project management of new generators, tanks, internal painting and a range of other engineering and mechanical works.

In 2011, Rivergate managed a six month refit of the vessel which included a complete exterior refinish; the largest special effect superyacht refinish to be completed in Australia, as well as the management of engineers, shipwrights, upholsterers and electronic technicians to complete other works.

In 2014 the vessel returned for further works which included a complete overhaul of the vessels stabilisers; removal, overhaul and refit of pumps and valves. All works to the vessel, managed by Rivergate, have been carried out to a Lloyd’s class standard.

“I think their returning to Rivergate is a reflection of the works we’ve completed on the vessel in the past, but it’s also the result of our good working relationship” states Andrew Cannon, Rivergate Marina’s General Manager, “The whole team looks forward to their return, the Captain knows everyone in the team and we enjoy having them here”, Cannon continues.