The Riviera Yacht Support annual Golf Bonanza returned for its 5th edition on 3rd October. The event was hosted at the Grande Bastide Golf Course, France, with Monaco Marine remaining the events Premium Sponsorship Partner as in previous years. The 2014 edition of the event saw the largest turnout to date, with 112 golfers and 143 guests attending for lunch. 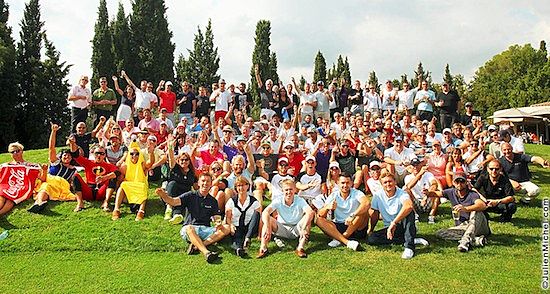 Commencing at 8.30 am after an English breakfast at the Grande Bastide Golf Course, after the game players were welcomed back with champagne and a three course lunch before the prize giving. Amongst the prizes were various bottles of champagne, golf bags and putters, an evening meal at two top restaurants and a Mini Cooper adventure in London.

A hole in one on hole number 3 would have resulted in an instant win of a brand new Mercedes SLK Roadster Convertible that was parked outside the Club House, a prize sponsored by Freedom Maritime. Unfortunately, nobody won the grand prize this year.

Organisers have announced that next year the tournament will be played on two courses simultaneously, with numbers expected to reach new heights once more.