RMK are proud to reveal the name of the Sparkman & Stephens designed yacht that until now has been known only by its build number. The 52m yacht is called Nazenin V and is owned by Mr Rahmi Koç, honorary Chairman of Koç Holdings and RMK Marine. The interior design of the yacht will be completed by well known designers Redman, Whitely and Dixon. 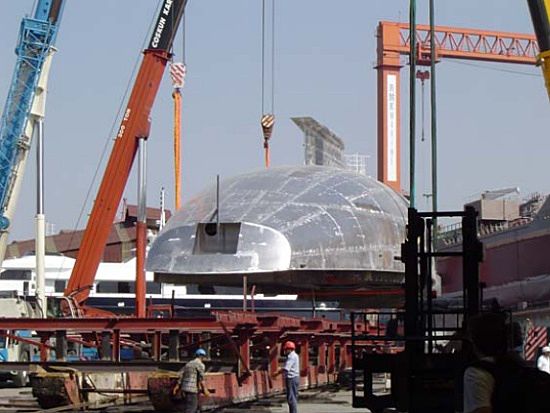 Mr Rahmi Koç has always had a passion for yachts and has done extensive cruising throughout the world. Nazenin V however may be sold once completed as the owner already has his sights on another new venture.

The RMK Marine team were joined by Mr Rahmi Koç recently at an event to mark the turning of the hull. Nazenin V was pulled slowly out of its massive shed where it had been welded by the RMK Marine team and four large cranes then carefully turned it over before it was returned to the shed to commence the next stage of fit out.

Paul Johnson, Project Manager commented “Now we will see the boat really start to take shape, we are pleased with progress to date”. Much of the interior is already constructed in the purpose built facility at RMK Marine, with part of the teak deck laid out ready to be put in place and secured to the hull.