King Shark is not quite Rossinavi’s biggest yacht; that title goes to High Power III (formerly Numptia), which is the same length overall but of slightly higher volume. Nor is it the shipyard’s first diesel-electric yacht; that was Endeavour II in 2017. But, when launched later this year, she will rank as one of the custom builder’s most technically advanced projects to date.

King Shark is in build for a repeat client who wants to travel the world from the regular Mediterranean and Caribbean cruising grounds to the much harsher conditions of the Baltic Sea and Arctic regions. Desiring the long range and autonomy of an explorer yacht, without the chunky styling that often goes with such vessels, he also wanted to make use of up-to-date propulsion technology. As the satisfied former owner of 49-metre Polaris, he went straight to the same design and build team: Enrico Gobbi of Team for Design for the exterior and interior, Giuseppe Arrabito for the naval architecture, and Rossinavi for the construction. 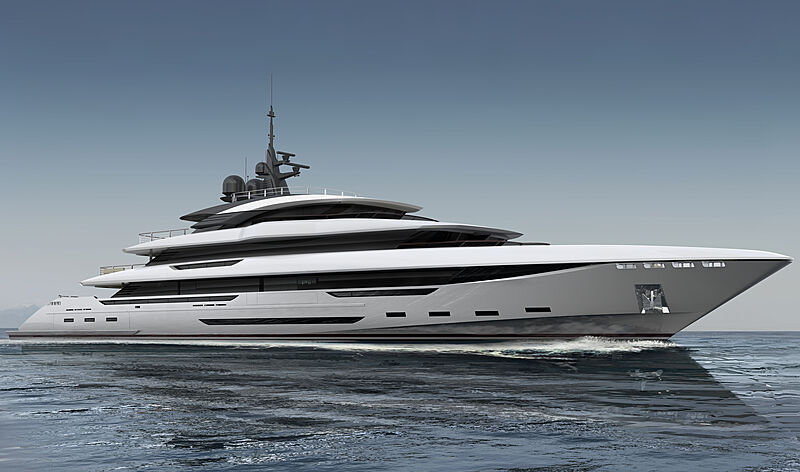 Photo: Team For DesignAt 70 metres and 1,560 GT, new yacht King Shark is a step up from the previous aluminium Polaris – and not only in length and volume. Cruising the freezing waters of the Arctic required a reinforced steel hull to meet category II requirements under Finnish-Swedish Ice Class Rules for summer conditions. The 10-metre limo tender, also in build at Rossinavi, is Ice Class category II as well.  “Just as important is protecting the seawater cooling systems in sub-zero conditions,” says the owner’s representative, Albert McIlroy of Optimus Navi. “The intakes for the sea chests are designed so that they can’t be blocked by ice; when underway the warmer cooling water from the generators is discharged into the sea chests; and when using shore power in port we have resistors that heat the water slightly to ensure it doesn’t freeze.” 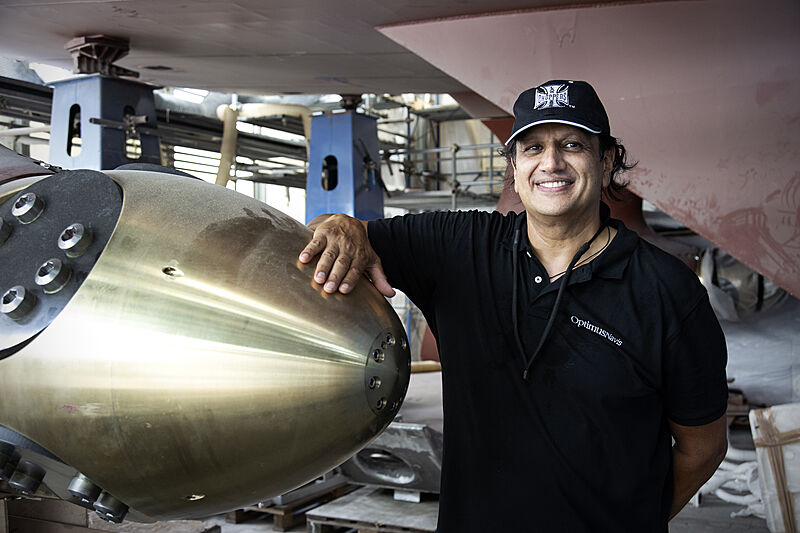 Photo: Justin Ratcliffe / SuperYacht TimesBut the most significant divergence from the owner’s previous yacht is the diesel-electric (DE) propulsion, which is still a rarity on superyachts. In a DE system, diesel engines serve as generators to produce electricity for the hotel services and also for propulsion via flexible cabling to electric motors that drive the propellers. The absence of drive shafts means there is no need for gearboxes.

The upside of DE is more efficient power management, flexible layout solutions, and less noise and vibration as there are no hard-mounted drive shafts. The downside is a higher initial cost and more space required for all the frequency converters and switchboards – valuable real estate that could otherwise be earmarked for owner or guest use. 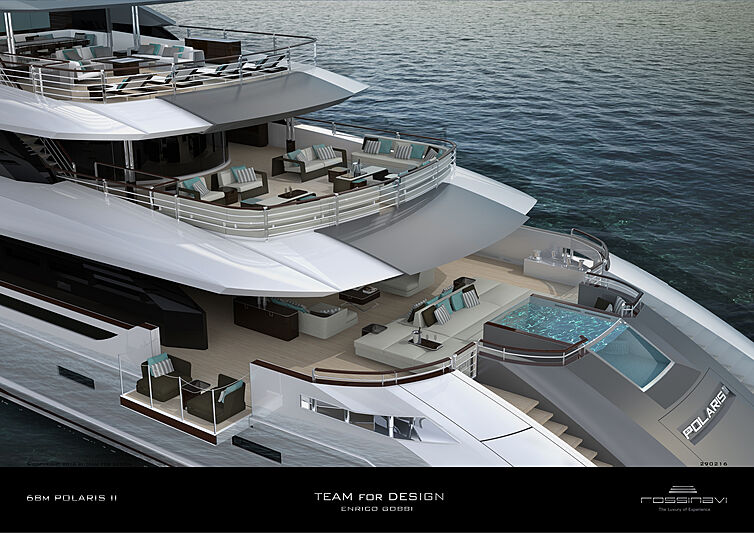 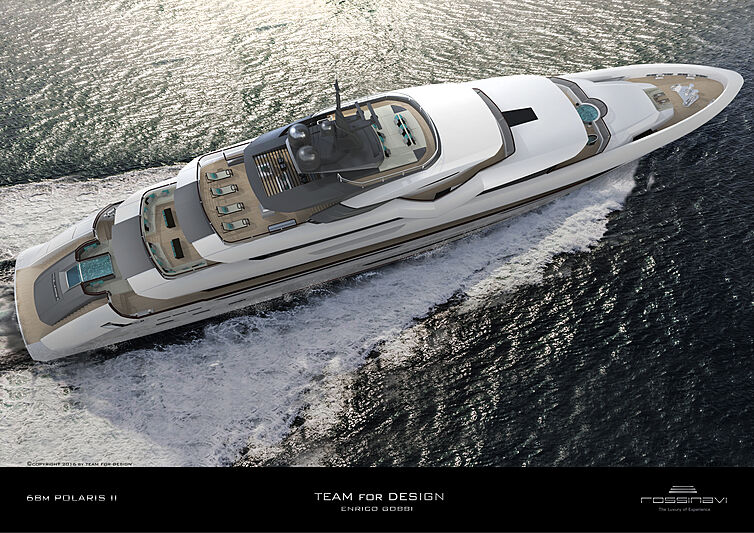 Photo: Team For Design“The owner saw the direction environmental legislation is taking and was interested in alternatives to conventional inline shafts from the start,” says Federico Rossi, COO of Rossinavi. “This is something we encouraged because we believe diesel-electric on yachts is more about positive perception and the efficient use of energy rather than saving fuel.”

King Shark has a next-gen version of the diesel-electric power plant with Rolls-Royce pods Rossinavi installed on 50-metre Endeavour II. Five Caterpillar gensets (x3 1,025 ekW and x2 337 ekW units) provide around 3.8MW of power for hotel and propulsion needs. Fixed pitch propellers were originally specified for the two azimuthing Rolls-Royce Azipull AZP85 pods coupled to Marelli 1,570 kW e-motors. However, the decision was taken to upgrade to controllable pitch propellers as they are more efficient across the full range of rotational speeds and load conditions. King Shark will have a top speed of 17 knots, a cruising speed of 15 knots and a range of more than 6,000 nautical miles at 12 knots. 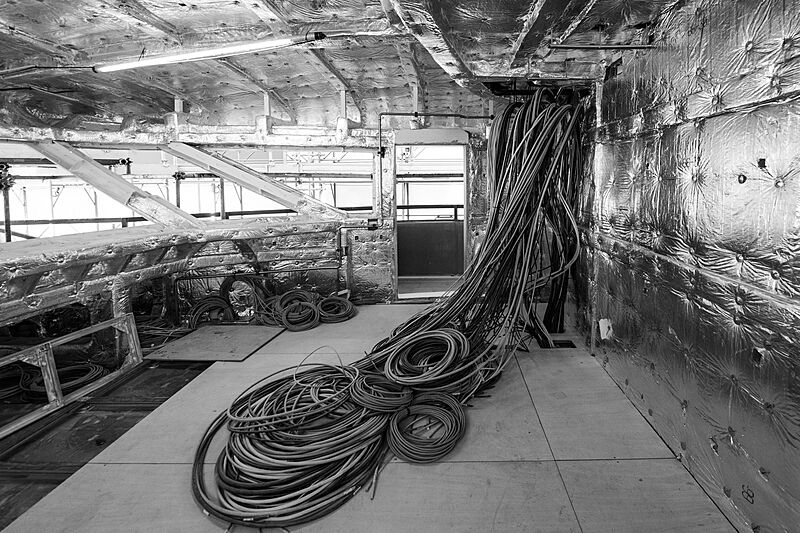 Photo: RossinaviA separate technical room on the lower deck houses the water-cooled SAVe Cube electrical system. All the frequency converters, drives and switchboards are integrated into a standalone unit to save space and simplify installation, while also being easier to cool and requiring fewer connections. Engine speeds are adjusted automatically to the power demanded in the most fuel-efficient way. Another ‘ship-style’ technical room on the under-lower deck groups together equipment such as the boilers, Hamann water treatment and Ultrafog fire-fighting systems. 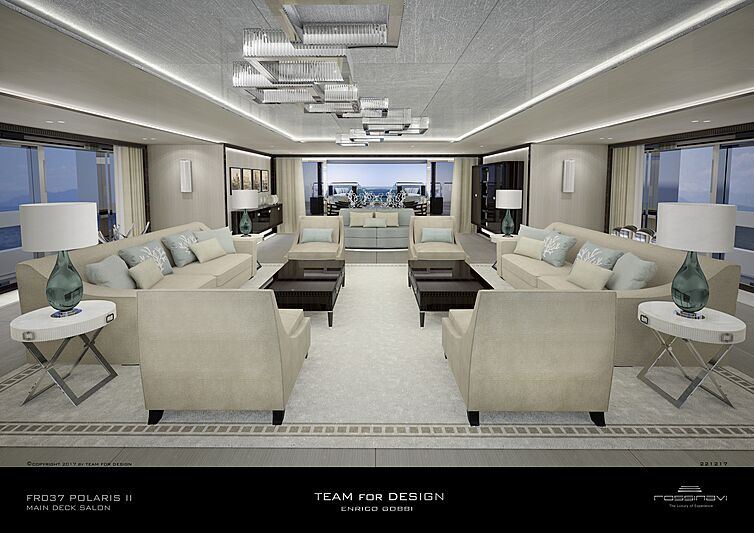 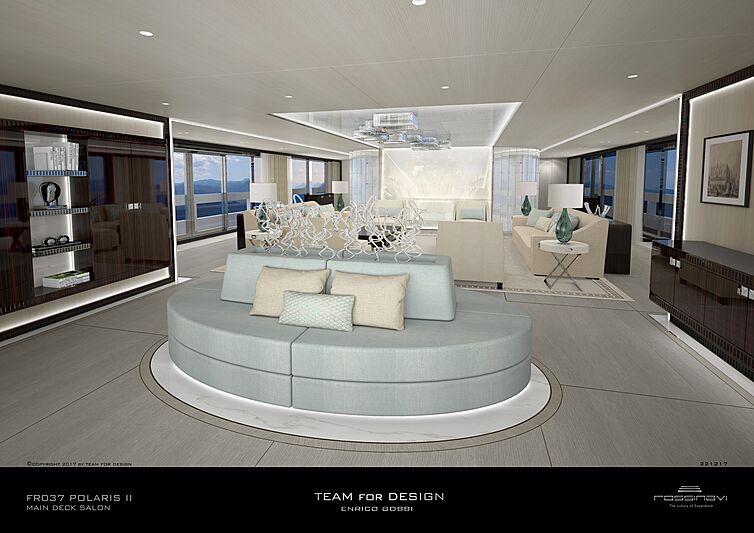 Photo: Team For Design“The advantage of diesel-electric from an operational standpoint is its versatility and redundancy,” says McIlroy, who has brought his operational experience aboard both merchant ships and superyachts to the project. “Depending on the power demand, we can use multiple combinations of diesel engines and if one goes down it doesn’t mean the end of a cruise.  The 100 percent torque, zero-speed capability of the azimuthing electric pods also provides full dynamic positioning.”

Because of the complexity of the DE system, McIlroy advised keeping it separate from the other yacht monitoring systems to make problem-spotting easier for the crew. All the main systems have back-ups, including the air-conditioning plant and the pumps for the water-cooled SAVe Cube, thrusters and generators. Despite all the extra hardware, the logical layout of the engine room and technical spaces means equipment is easily accessible for maintenance purposes. 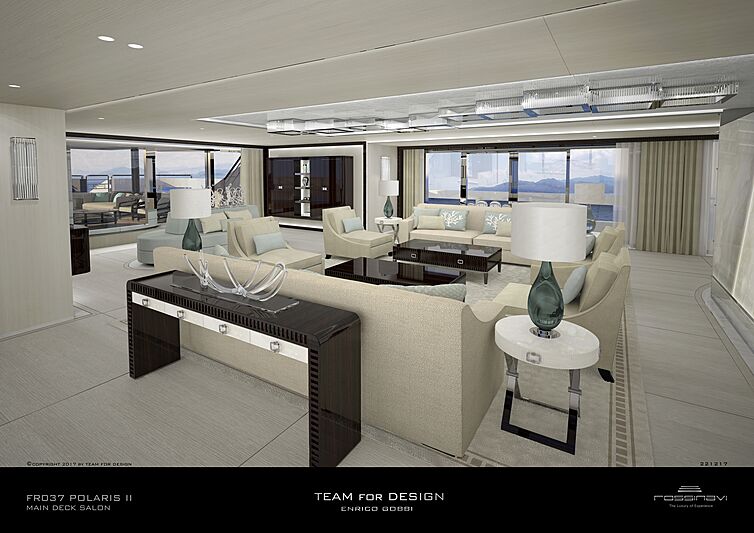 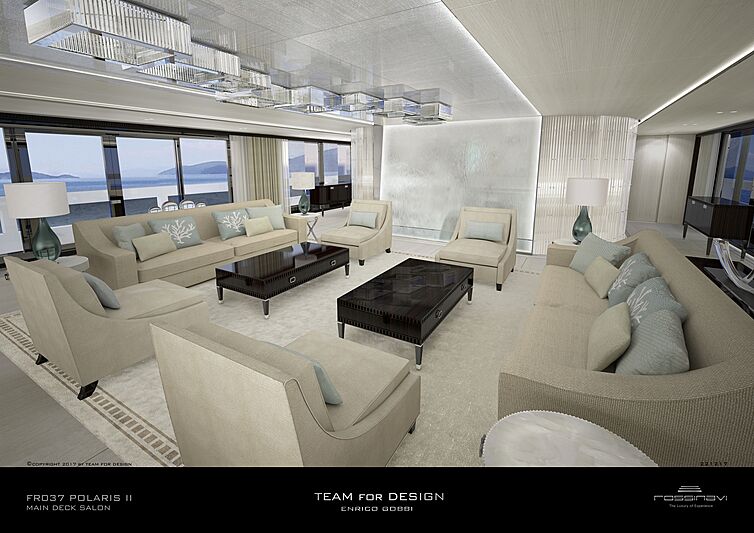 Photo: Team For DesignRossinavi introduced several upgrades to the build specs at its own expense. These included adding an oil storage tank in the stern for filling and discharging the pods, and watertight doors between the pod rooms to provide more storage space and avoid both rooms being flooded in the event of an accident. Soft patches in the pod room bulkheads means the Marelli e-motors can be removed through the tender garage and the SAVe Cube room if necessary.

The muscular exterior lines are similar to Param Jamuna IV and Polaris in the semi-displacement Prince Shark series by Team for Design, but spread out over 70 metres and five decks (plus an under-lower deck) the effect is altogether more imposing. A defining characteristic of the design is found in the forward sloping windows on the owner’s and bridge decks (the yacht will have a semi-integrated Böning/Rolls-Royce bridge). Nowadays, even very large windows are flexibly fixed with adhesives, but with panes weighing around 500kg and angled at 45 degrees it was felt prudent to provide mechanical attachments as well. 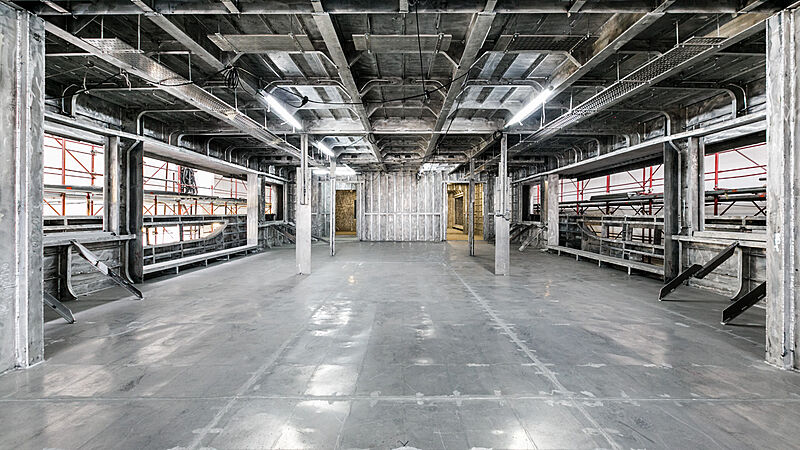 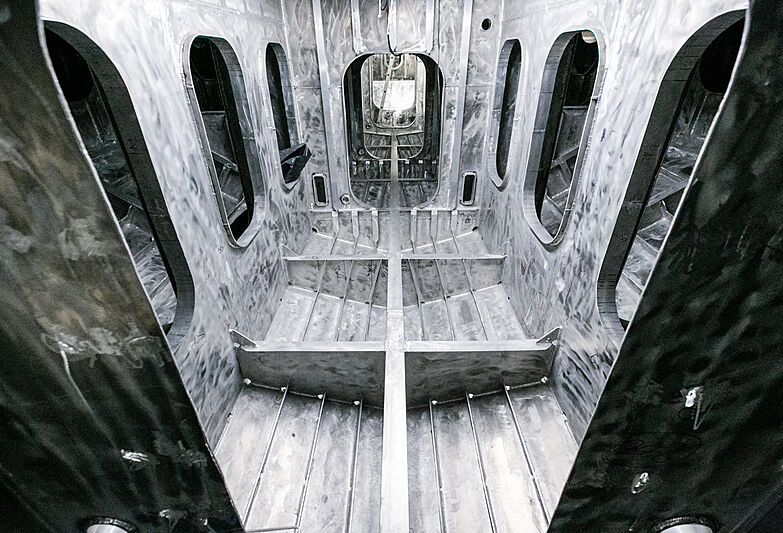 Photo: RossinaviIn terms of layout, King Shark throws up a few surprises. The lower deck has the standard four guest suites and crew accommodation, but because of the SAVe Cube room and pod rooms, there is only space in the stern for a small beach club with sauna and day head. 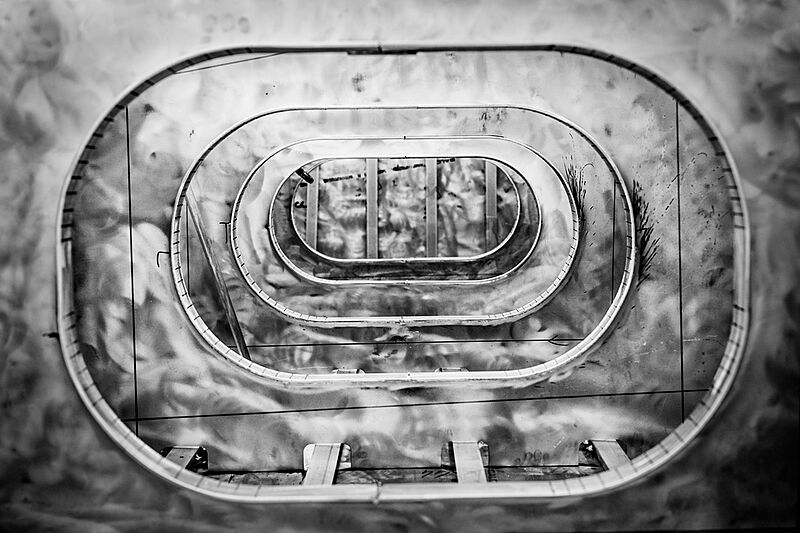 Photo: RossinaviInstead, the massage room, hammam and an enormous gym with full-height sliding glass doors have been relocated to the main deck forward, along with the first officer’s and chief engineer’s cabins. A sickbay next to the gym can double as a supernumerary’s cabin. Aft of the main lobby, which will feature a bespoke crystal chandelier in the stairwell between the upper and lower decks, is the main salon with an enclosed cinema room.

The cinema room bulkhead features an onyx wall with a water cascade and overlooking the open aft deck is an oval sofa that can be transformed into a dining table for 12 guests. On the owner’s deck, the master stateroom has direct access to a private forward terrace with another water cascade. There is a VIP suite amidships and the sky lounge features a temperature-controlled wine rack separated from the salon by a wall of onyx pillars. Back-lit onyx features throughout the classic-contemporary interior design, along with Calacatta Lincoln and Marquinia nero marbles, high-gloss ebony and light Tay wood with a satin finish. 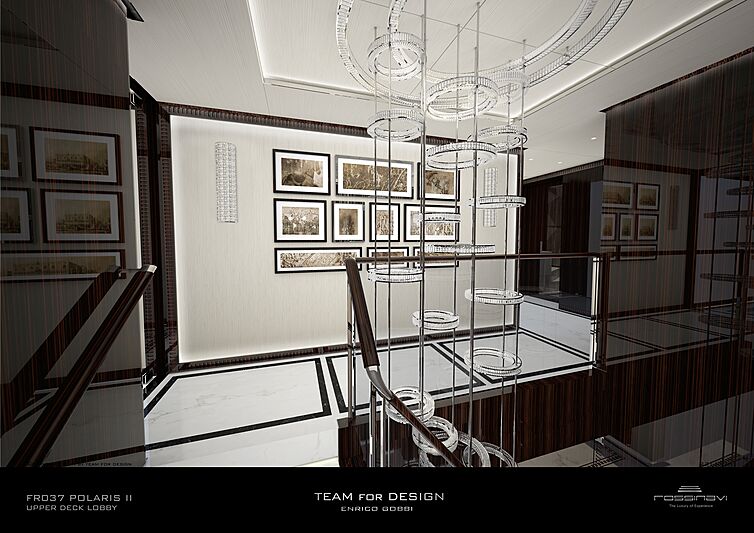 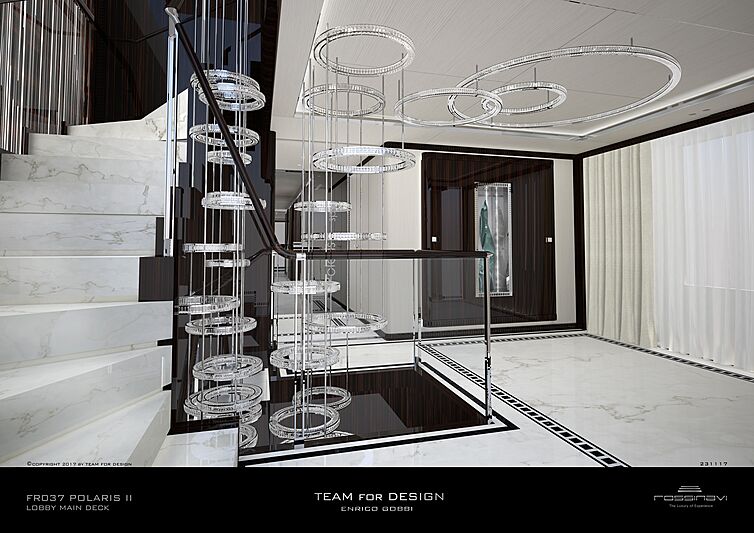 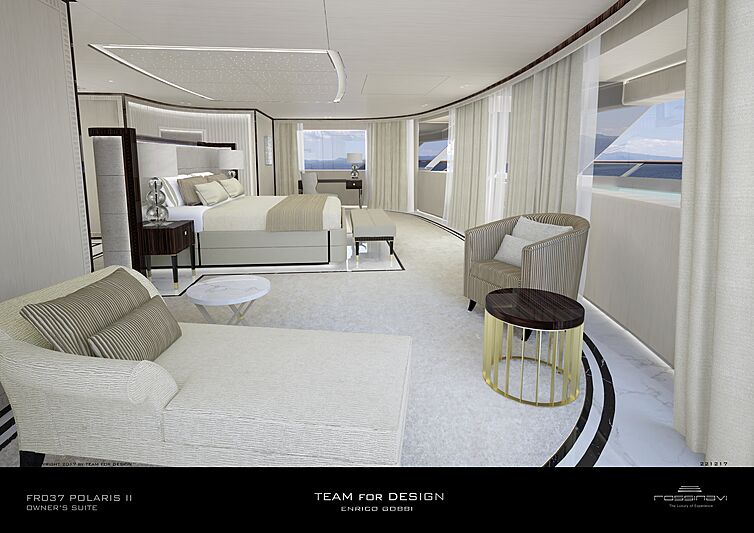 Photo: Team For DesignKing Shark is a technological feat

One of Rossinavi’s strengths as a custom yard is its engineering expertise, which stems from its past as a subcontractor to other Italian shipyards before becoming a fully-fledged builder in its own right. Federico Rossi likens the aluminium and carbon-fibre passarelle to something Apple might design if it built boats. A fully retractable structure was unfeasible because of the pod rooms and crane crossbeams in the garage. The ingenious bespoke solution is a partially retracting gangway with integrated steps that fold out to mirror the portside transom staircase. The end section folds into the aft platform and, when extended, a teak-lined cover is raised on a scissor lift to fill the recess and sit flush with the decking. 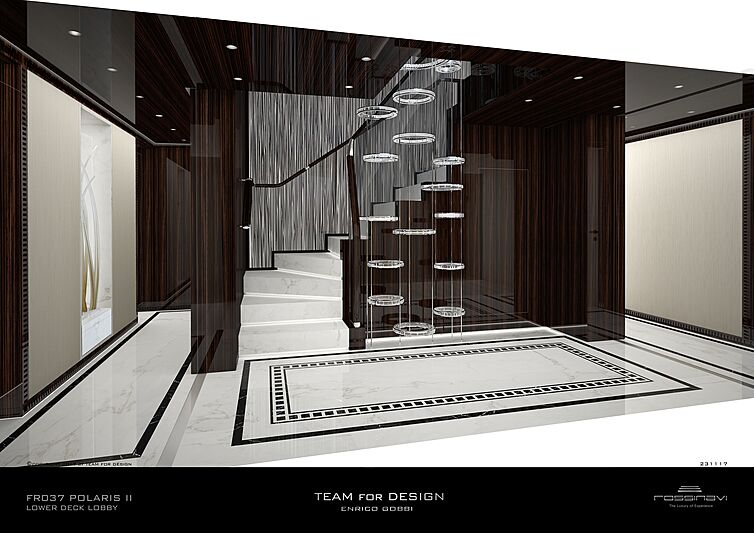 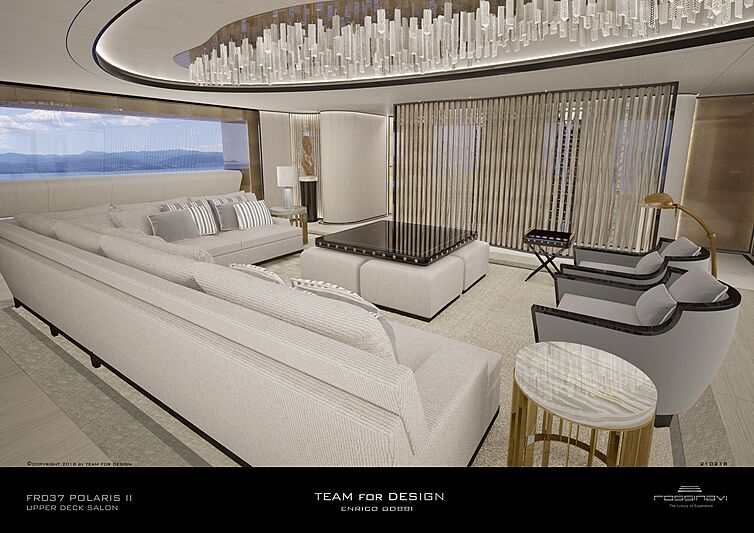 Photo: Team For Design“We’re a full custom shipyard and the big technical projects like King Shark allow us to draw on our construction experience and engineering expertise,” says Federico Rossi. “In a market where series builders are proposing 50-metre yachts, that means competitive advantage for us and added value for the client.”

This article was first featured in The SuperYacht Times newspaper in the September/October issue. Subscribe now to receive your copy straight to your door and never miss another issue.