Royal Huisman has announced that it has been commissioned to undertake the conversion of the famous 42m (139ft) carbon composite offshore racer Mari Cha IV. To be re-commissioned as Samurai the conversion will be carried out by Royal Huisman’s Huisfit division in Vollenhove for an experienced yachtsman wishing to add cruising amenity to the original sailing performance. The client’s mission statement to Royal Huisman was that Samurai must be beautiful, stealthy looking, very fast, elegantly comfortable, technologically advanced and unforgettable to sail. 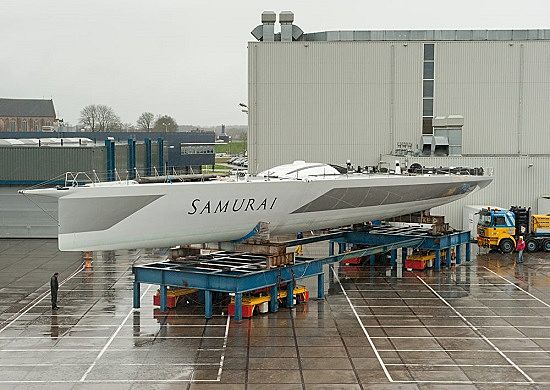 Modifications to the epoxy carbon fiber structure will provide the keyway for the addition of a new deckhouse, superstructure and cockpits based on exterior designs by Rhoades Young Design whom are going to the extremes of weight saving to design a bespoke interior where there was once none.

Designed by Philippe Briand and Greg Elliot, the 42m (139ft) Mari Cha IV was launched by JMV Industries in 2003 and was the largest— and fastest—racing boat afloat at the time. She is capable of speeds of over 40 knots and smashed the West to East Transatlantic record in 2003, making the crossing in less than seven days. In 2005, she won the Rolex Cup fleet race across the Atlantic from New York to Lizard Point. With no automation her twin masts of 45m (148ft) required two separate teams of grinders and trimmers working a total of 21 winches on deck.

Technically there will be a complete overhaul and upgrade of the onboard systems, including high- speed hydraulics for the winches, alarm, monitoring, entertainment, navigation, etc. As with everything related to this project weight saving will be the final mark of achievement whilst for practicality a lifting keel will replace her canting keel. A complete new color scheme, lightweight and easy-to-maintain teak-lookalike deck surfacing will harmonize with updated deck equipment. Project management will be undertaken by yacht consultant Jens Cornelsen. Mari Cha IV smashed the West to East Transatlantic record in 2003, making the crossing in less than seven days. Her best distance was 525 miles in one day. 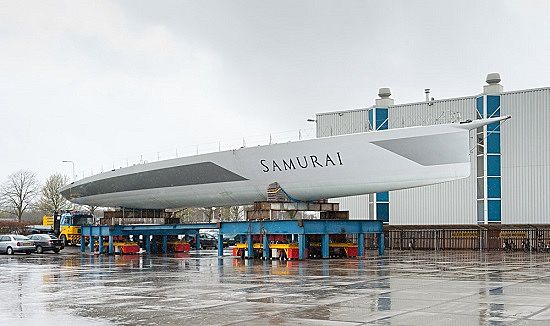 The spectacular Samurai joins Huisfit’s impressive list of current refit projects. One of these in particular, the 20m (65ft) Royal Huisman ketch Flyer, was another high performer in her day and won the 1977-1978 Whitbread Round the World Race (the precursor of today’s Volvo Race). She very recently returned to the yard to take advantage of the Huisfit program, as has the 24m (78ft) Heartbeat, which is back for a cosmetic upgrade to her exterior and interior. Meanwhile, work continues apace on Royal Huisman’s highly distinctive new-build projects, including three yachts ranging in size from just under 40m (131ft) up to 52m (171ft), while the recently launched 48m (157ft) classic sloop Wisp remains in time for her delivery.