The 30 metre superyacht of the famed Russian billionaire Sergey Polonsky has been beached on the island of Koh Tang in Cambodia for more than a week. Reportedly built by the Italian shipyard Azimut, it is not clear how exactly the yacht became beached and with limited technical expertise and lack of correct machinery on the island, it could be quite some time before she is afloat once more. 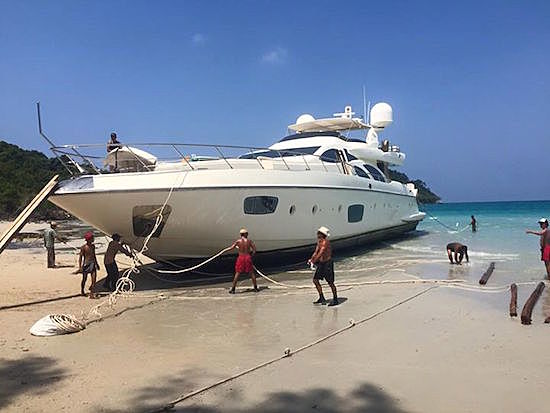 Despite the lack of clarity surrounding the retrieval of the yacht from the beach, her owner appears to be in no rush to speed up proceedings. In fact, over the past several days Polonsky has been updating his social networks with statuses that seem enamoured with his surroundings, stating on 18th April, “Starry sky above us. The feeling that we are stuck in another galaxy. The whole team has one question, where do they sell tickets to the movie. Now waiting for high tide. Beautiful.”

Though Polonsky appears to be enjoying a carefree life in the paradisaical setting in South East Asia where he lives on a privately owned island, the circumstances behind his move from Russia are a little more serious.

Prior to the financial crisis, Polonsky made the Forbes list of billionaires, with an estimated net worth of $1.2 billion. After being accused of embezzlement from investors in two residential developments in Moscow, he was issued a ‘red notice’ by Interpol towards the end of 2013. He fled the country to his current residence in Cambodia, which has no extradition treaty with Russia.