The Pendennis Cup came to a dramatic close on the 16th August after five days of spectacular racing out in Falmouth Bay, UK. The yachts fiercely competed for the Pendennis Cup in sometimes challenging conditions, providing drama and excitement for all to see. On two of the days the fleet was reduced in size due to winds of 30 knots plus and by mid week two swimmers were recorded as well as a broken fore main gaff on Mariette.

Captain Charlie Wroe from S/Y Mariette commented, “It was a great regatta and our crew had lots of fun. We welcomed the experience to race in windy and boisterous conditions that we don’t typically see in the Med. We look forward to coming back.” 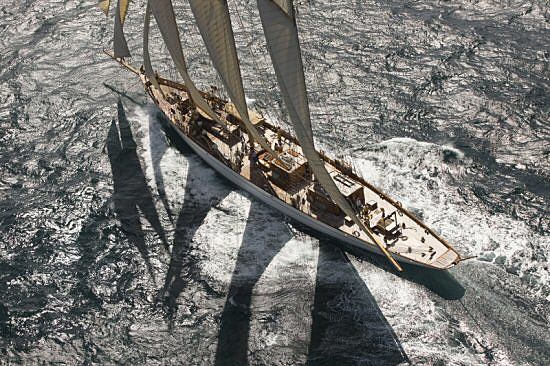 On the final day Lutine, Mariette and Altair all left the marina at Port Pendennis with a definite chance of taking the main prize. After a text book start, Altair held on to the lead in 30 knots plus, despite a dramatic challenge from Adix fully powered up on the downwind leg. Altair came tearing over the line to take the gun and the inaugural Pendennis Cup in style.

The Cup was organised by Pendennis Shipyard as part of their 20th anniversary year and held as part of Henri Lloyd Falmouth Week 2008. Seven yachts in total competed for the Cup over 5 races between the 11th – 16th August (Wednesday was the designated lay day). Competing Yachts included Mariquita, Mariette, Altair, The Lady Anne, Adix, Lutine and Kelpie.

Large yachts haven’t raced in Falmouth since 1911 and the regatta proved a huge hit with visitors and the local community, with hundreds of people lining the Cornish coastline to get a look at the spectacle.

The fun didn’t stop on the water and the shoreside entertainment included a welcome evening at the Royal Cornwall Yacht Club, hog roast and joining in with the Falmouth Week festivities in St Mawes and the Event’s Square 70’s and Caribbean nights.

The Pendennis Cup was originally organised as a one off regatta, but following on from its success and the feedback from both the crews and general public it is certain that the event will run again in the South West.

Toby Allies, Head of the Sales and Marketing team at Pendennis commented “I am very pleased with the success of the regatta and Falmouth provided the ideal backdrop for challenging sailing and entertainment. It was a real highlight of our 20th anniversary year.”

He continued “Furthermore, a special mention has to go to all of our event partners who provided invaluable support and guidance to make the Pendennis Cup a success.”